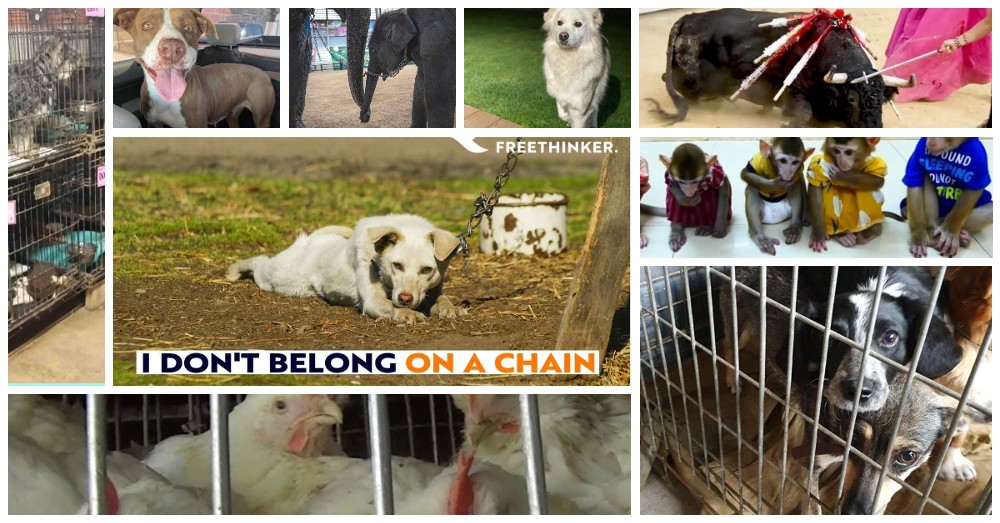 Lady Freethinker has spent another busy year working to obtain justice for animals and to usher in a more compassionate world for all species!

Your support this year has catapulted us forward in that ongoing mission — from aiding animals victimized by the war on Ukraine, to exposing filth and cruelty at animal “attractions” and live animal markets, to working tirelessly to keep you informed about breaking news in animal protection so you can help us make lifesaving changes!

Here’s a recap of some of our most powerful petitions, investigations, and resources that we released in 2022. We’ve also thrown in some of our favorite uplifting stories, to warm your heart during these cold winter months!

We hope that the new year brings peace, joy, and lots of snuggles to you and your fur families! We can’t wait to keep fighting for animals and to stay connected with you in 2023! Thank you for your support and help in making a difference for animals everywhere!

VICTORY! DOG MEAT AUCTION EXPOSED IN LADY FREETHINKER INVESTIGATION ORDERED TO SHUT DOWN: We received confirmation in February that the illegal dog meat auction house in Icheon, S. Korea, exposed in our 2021 undercover investigation was shut down and demolished.

LADY FREETHINKER PARTNERS WITH ROMANIAN RESCUE TO SAVE DOGS LEFT BEHIND IN UKRAINE INVASION: We partnered with the Romanian Animal Defense League (ROLDA) to help save 30 homeless dogs from the war-torn streets of Ukraine, which included covering their rescue and medical care costs.

RESCUE UPDATE: DOGS FLOWN FROM CHINA ARE THRIVING IN FOREVER HOMES: We sponsored a flight of 21 dogs from dire situations in China to loving forever homes in Canada through a partnership with World of Angels and Rescue Paws Canada.

LADY FREETHINKER AWARDS $10,000 TO HELP DOGS TORTURED, STARVED & SUFFERING: We awarded a $10,000 grant through its Urgent Need Fund grant program to a Texas-based nonprofit that homes, vaccinates, spays and neuters, and otherwise cares for animal victims of cruelty and neglect cases.

DOGS AND WILD ANIMALS ARE SUFFERING IN SUMATRAN LIVE MARKETS: A Lady Freethinker investigation, covered by Newsweek, uncovered horrific conditions at live animal markets in Sumatra, including dogs stuffed into small sacks with their mouths strapped shut, birds crammed in metal cages stacked on top of each other, and turtles whose bodies had been hacked apart. We’re continuing to push Sumatran officials to ban the dog meat trade and live markets. More news soon!

NEGLECT, ABUSE, AND APPALLING CONDITIONS FOR PUPPIES AND DOGS IN PENNSYLVANIA’S UNLICENSED KENNELS: A public records investigation found that puppies and dogs in Pennsylvania are suffering in filthy barns, backyards, and cramped kennels at the hands of unlicensed breeders and dealers. We detailed those conditions in a 59-page report covering illegal kennels in dozens of counties. We received local media attention and will continue urging everyone to always adopt animals from shelters, not from breeders or pet stores.

NEW INVESTIGATION EXPOSES HORRIFYING, HIDDEN CRUELTY TO BABY MONKEYS IN ‘CUTE’ ONLINE VIDEOS: Lady Freethinker, working with Action for Primates, sent an investigator to document the reality for baby monkeys exploited by social media channel owners who dressed them up in doll clothes and forced them to perform “cutesy” stunts for the camera — then locked them away in cramped, barren wire cages, often with no access to food and water, when the recordings stopped. Following our investigation, Cambodian authorities confiscated at least 13 macaques.

MEDICAL SCHOOL CITED BY FEDS FOR REPEATEDLY CUTTING OPEN PREGNANT BABOONS: A public records investigation revealed researchers at the Eastern Virginia Medical School had cut open pregnant baboons multiple times, in violation of the federal Animal Welfare Act, and also injected pregnant monkeys late in their terms with substances that caused them to have seizures and abort their fetuses. We organized an action at the university to bring attention to the cruel experiments and dropped off our petition signed by more than 38,000 supporters.

FERAL CATS ARE BEING SHOT TO DEATH AS THE OFFICIAL ‘MANAGEMENT’ STRATEGY AT GARNER STATE PARK IN TEXAS: A distressed reader reached out to Lady Freethinker and alleged feral and abandoned cats were being shot to death at Garner State Park. Using public records, we verified the park had shot to death at least 16 cats with 0.22 bullets as the park’s official “management” strategy, rather than work with rescuers who had offered to help humanely catch and re-home the cats.

UTAH JURY UNANIMOUSLY FINDS RESCUERS NOT GUILTY FOR SAVING DYING PIGLETS FROM SMITHFIELD FARM: A Utah jury issued a unanimous verdict that members of Direct Action Everywhere who removed two sick and dying piglets from Smithfield factory farm were not guilty of theft or burglary — a landmark case establishing the “right to rescue” severely distressed and dying animals from cruel situations.

SIGN: JUSTICE FOR BULLS STABBED, KILLED, AND DRAGGED AT HORRIFIC SPANISH BULLFIGHT: An LFT investigator documented frightened bulls repeatedly impaled with lances who collapsed to the ground, likely from excessive blood loss and exhaustion, at Madrid’s Plaza de Toros. We’ve sent our petition, now signed by more than 43,000 people and urging an end to cruel bull torture, to Spanish authorities.

NO ONE BELONGS ON A CHAIN: Lady Freethinker released our “Unchain a Dog” educational and action campaign this year to advocate for all dogs suffering at the ends of tethers and chains. Our efforts included educational information about how dogs suffer when confined to chains, a pledge for people to promise to never chain their own companion animals and to speak out for those they witness on chains, and a template letter to send to city and county leadership asking for a ban in local communities. We interviewed Officer Jim Conroy, who successfully spearheaded efforts for a chain-free ordinance in Campbell, Ohio. We’ve also published petitions advocating for chain-free legislation in North Carolina, Knoxville and South Carolina, and partnered with ChainFree Knoxville to help cold and lonely dogs on chains and kept outside 24/7.

Q&A WITH VETERINARIAN GWENDOLEN REYES-ILLG: WHAT YOU NEED TO KNOW ABOUT FARMED ANIMALS AND PAIN: Veterinarian Gwendolen Reyes-Illg spoke with Lady Freethinker in depth about the cruel procedures farmed animals routinely endure on meat and dairy farms in an educational and eye-opening interview that will equip you with facts for advocating for these precious beings.

FREE PLANT-BASED RECIPES RELEASED IN HONOR OF NATIONAL CANCER PREVENTION MONTH: The most sure-fire way to make an immediate difference for all animals is to keep them off your plate! The demand for meat and dairy products impacts not only the animals confined to cruel factory farms, but also can lead to persecution and death for wildlife — from coyotes and wolves who are being massacred for a relatively small number of depredations on livestock, or for defenseless species like the Tule Elk who are being shot to death on public lands on the Point Reyes National Seashore, which also is leased out to private ranchers to graze their livestock.