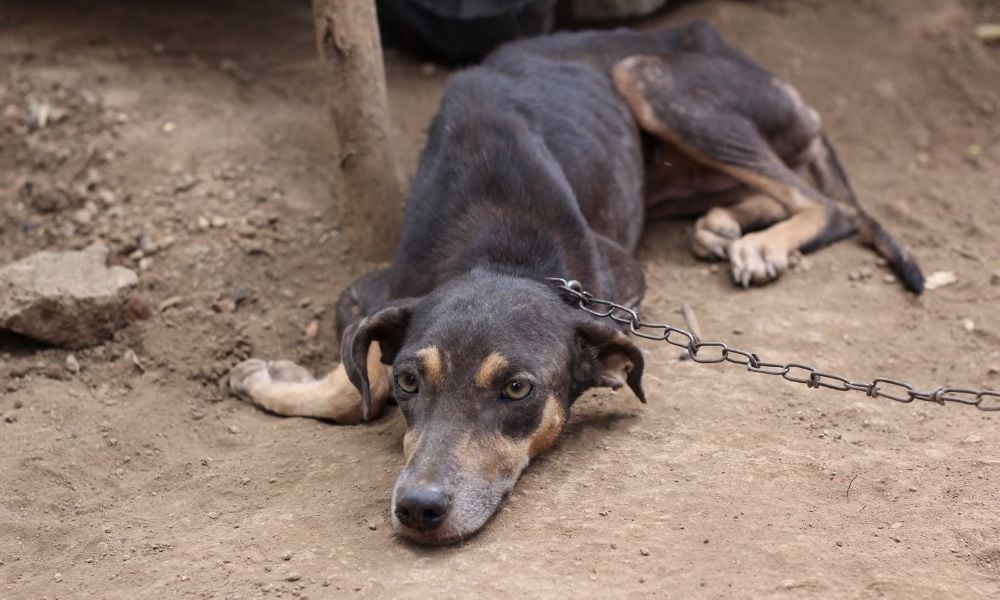 UPDATE (11/3/2022): HB 1116 remains in the Committee on Appropriations, where’s it been since May 31. We’ll keep watching this important bill and advocating for chained dogs. —Lady Freethinker Staff

Starving, miserable, and exposed to the elements — that’s what life on a chain is like for thousands of dogs across the United States.

In North Carolina, canine victims included Star, a female pit bull found dead on the end of a chain during a 90 degree day in Halifax County, and Fiona Mae Wagglebottom — a formerly-tethered dog who sustained a broken tail and a number of long-lasting medical problems before she was rescued by law enforcement and adopted by Rep. Allison Dahle, who has sponsored amendments to the state’s cruelty law in her honor.

House Bill 1116, or the Fiona Mae Wagglebottom’s Act, would prohibit keeping dogs tethered or chained outside during extreme weather — including warnings for hurricanes, tropical and winter storms, tornados, and when temperatures are below 32 degrees or above 85 degrees Fahrenheit.

The bill would also define adequate space and shelter for dogs and would appropriate money for the state Department of Agriculture and Consumer Services to conduct a public awareness campaign around tethering of dogs — which could save countless lives.

Defenseless animals also have died in Raleigh, where officers found the remains of two dogs still chained to a tree, and in Hope Mills, where law enforcement found a dog frozen to death at the end of a chain.

Dogs are social animals who deserve to be treated like part of the family; they never belong chained in the backyard. Places all over the country — including Portsmouth, Virginia; Los Angeles, CA; the whole state of Texas, and many more — already  have enacted ordinances that ban or restrict tethering. It’s time for North Carolina to do the same.