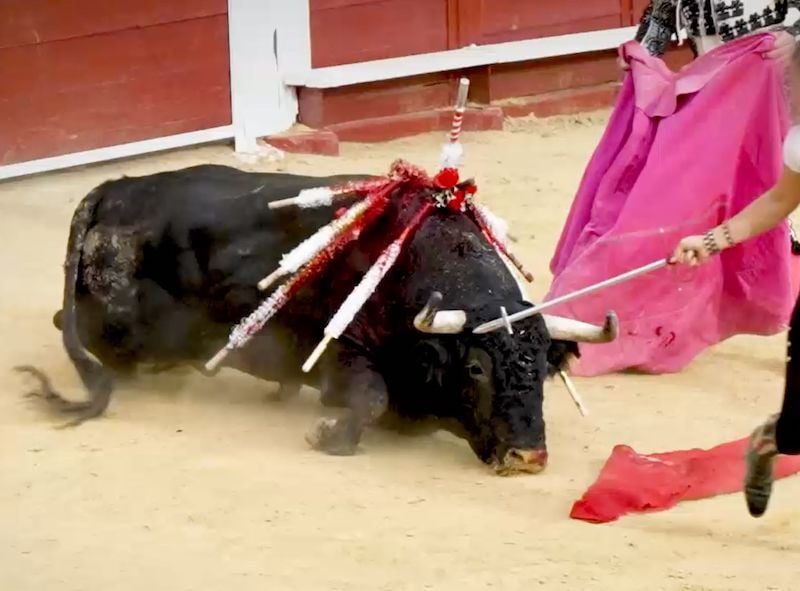 Lady Freethinker documented frightened bulls impaled with lances and spiked, harpoon-like sticks called banderillas by men and women on horseback until the bloody, exhausted animals collapsed to the ground and were dragged out of Madrid’s Plaza de Toros de Tordesillas.

LFT’s observer, who documented a bullfight at the Spanish “entertainment” venue in September 2022, witnessed seven bulls violently and intentionally killed by three different matadors – or bullfighters – in front of a cheering and clapping audience.

Each bull had an average of 6 spears shoved into their back muscles, according to our observer.

The observer also witnessed exhausted animals being forced to fight as blood gushed from their worn-out bodies.

Workers were then left to clean up the pools of blood.

While horrific, the killings witnessed by LFT’s observer are just a snapshot of the suffering. Every year, an estimated 180,000 bulls are killed in cruel bullfights across the globe.

In 2021, nearly 5,000 bulls were violently killed in Spanish bullfights alone, with over 700 of those deaths taking place in Madrid.

The Spanish government, in defending the gruesome fights, has previously told LFT that brutal practice is a “tradition” in Spain and a “symbol of our arts and culture,” as well as a “legal and comprehensively regulated activity.”

But tradition is never a justifiable reason to torture and kill sentient beings. Bulls feel pain and fear,  just as humans do.

Countries like Cuba, Argentina, Italy, and more have already banned cruel bullfighting. It’s time for Spain to do the same.

Please sign our petition urging the Prime Minister of Spain to permanently ban bullfighting in the country, and for the Madrid City Council to ban the practice within city limits in the interim. Then share this petition with your friends and family, and remember to never support ANY place that tortures and exploits animals for “entertainment.”