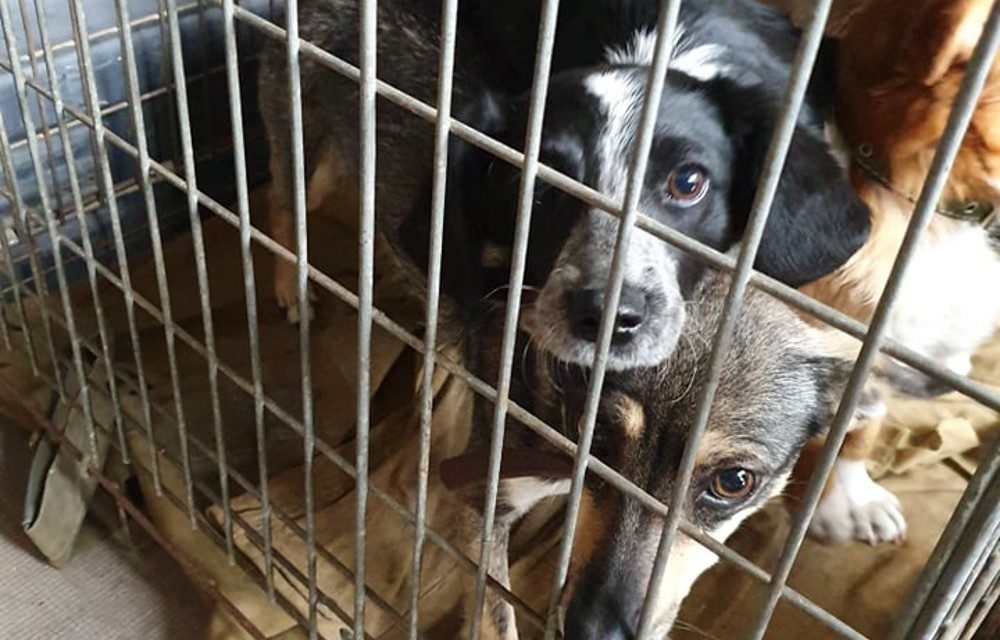 Lady Freethinker is partnering with the Romanian Animal Defense League (ROLDA) to help rescue homeless dogs from the war-torn streets of Ukraine.

LFT has sponsored the rescue of 19 dogs – 15 from Korosten and four from Odessa – as well as the costs of their medical care to date, in a rescue carried out by ROLDA.

The adult dogs are being prepared for adoptive homes. The puppies are still in quarantine at ROLDA shelters in Romania.

Ukraine has been under siege and Russian invasion since Feb. 24, with bombed animal shelters and canine casualties added to the estimated 900 civilian deaths and thousands more of human injuries.

Shelling and military machinery often have blocked shelter staff and rescuers from getting back to the animals, or caring for the hundreds of additional animals abandoned on the streets – and so a goal, for many, is now to get them out.

ROLDA, a nonprofit licensed  in the United States, Australia, and Europe, operates two shelters near Galati, in eastern Romania, and is just 8 km – or about five miles – from the border between Moldova and Ukraine. When war broke out, ROLDA Founder Dana Costin said she wanted to do everything possible to help both refugees and the animals left behind.

“People hiding from bombs can’t get out to organize a dog transport,” she told LFT via email. 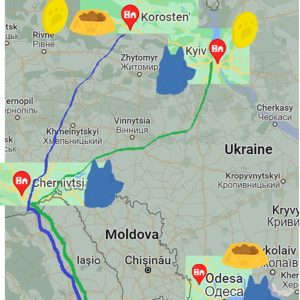 ROLDA set up a new emergency fund with three main goals: to collect and send funds directly to Ukrainian shelters in need of food and supplies, to evacuate dogs from those shelters to safety, and to provide long-term and continued support once the war ends.

In early March, ROLDA signed a collaboration agreement with a shelter in Kyiv and sent funds.

About a week later, they signed an agreement with a shelter in Korosten, sending financial support and dog food and also welcoming 15 dogs and eight puppies to their shelter. A displaced family identified one of the dogs, a small terrier named Franki, by looking through pictures on ROLDA’s website, Costin said.

The family sent her photos of Franki comfortable in their home, then photos of the home destroyed by the war.

“It was powerful because war destroyed more than the house,” she said. “It destroyed their life and split the family. The man remained in Ukraine, the woman is in Italy, and the dog is in Romania. Nobody can fully understand what these people are going through.”

Franki will be reunited with his female guardian in Italy once he passes through the required quarantine period, she added. 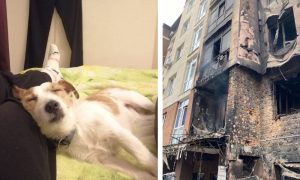 ROLDA also provided refuge for 23 dogs collected from Kyiv and Cernauti from “a brave driver who risked his life”, Costin said.

The end of March also saw financial support sent to the Give a Paw, Friend shelter in Zaporizhzhia, Ukraine,  and supplies sent to refugee camps in Tulcea and to the border at Isaccea, both in Romania, for people fleeing with pets. ROLDA also accepted four more dogs rescued from Odessa on March 28 and 15 dogs transported from Korosten on March 29.

Costin said of the Odessa rescue that she and celebrity animal activist Lolita Morena traveled to the Moldova-Romania border to meet Anastasiia (who preferred that her first name only be used for this story), a Ukrainian animal rescuer who drove “a long way” to hand over four dogs she wanted to see protected from the war.  Along the harrowing journey, Anastasiia also picked up a puppy, now named Rinka, she found wandering the streets in Moldova.

For the return journey, ROLDA filled Anastasiia’s car with 800 kg– or about 1,700 pounds – of food for animals still in Ukraine and some boxes of aid relief for people, too. 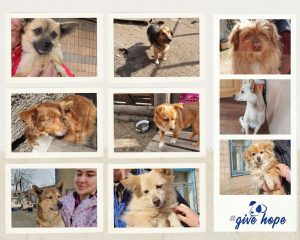 Volunteers also have translated information about ROLDA’s rescue transports and veterinary and shelter care into Ukrainian and distributed them at the Giurgulesti-Reni border and to hotels where refugees are staying.

While rescuers in the war zone are risking dangerous and deadly odds to help innocent animals, the rescuers rooting for them on the outskirts also are facing formidable challenges.

Costin said that Romania’s national veterinary agency recently told shelters that only dogs brought into the country with their guardians would qualify as being “non-commercial” transport.

Romanian rescues accepting evacuated animals from shelters based in Ukraine are dealing with a government label of “commercial” transports – which comes with a long list of required tests and documents that include pet passports, proof of rabies vaccines, microchips and health certificates. 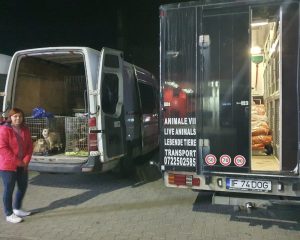 The refugee animals also must take and pass a rabies titre test, which involves drawing blood and sending those samples to one of about only 40 labs worldwide qualified to process the tests. The test checks for antibodies that neutralize rabies in an animal’s blood and are an indicator that rabies vaccines were effective.

The titre tests are particularly problematic right now since Costin heard from locals in Ukraine that Kyiv’s lab is no longer functioning. Then there’s the lack of veterinarians, period.

“These are impossible rules to follow because many cities in Ukraine don’t have vets anymore to make passports, so even if dogs are microchipped and have their rabies vaccines, it is difficult to have the papers completed,” she said. “It is sad to see that getting dogs out of Ukraine legally is such a challenge, as things are already so difficult.”

A working solution to protect people from possible rabies outbreaks while also allowing innocent animals to be saved would be following and enforcing existing quarantine rules, she added.

Costin, however, will do whatever it takes to save the dogs.

“If I have one quality, with all modesty, it is resilience,” she told LFT. “I simply don’t give up. They will get tired of me, but they will give me the dogs.” 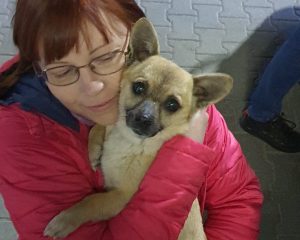 Costin added that she also faced a language barrier when she initially tried to connect with Ukrainian shelters and also had to build relationships with them.

“We have our own problems (in Romania) with strays, with overcrowded shelters and lack of money,” she said. “I told them that precisely because I come from a similar background, even if I haven’t been in a war, I might understand them better. Ultimately, I promised them that I will treat their dogs which I take into our shelters like they are mine.”

ROLDA’s shelter isn’t currently set up to rescue cats, but the nonprofit is working with volunteers from Tulcea to help rescue and foster cats, ROLDA said in a Facebook post. 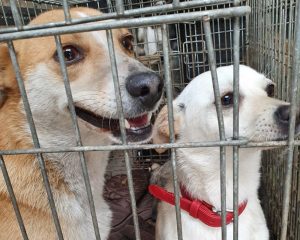 While efforts are currently focused on getting needed resources in to Ukrainian shelters, and providing safe haven and ultimately safe homes for shelter animals, Costin does also hope the emergency fund can provide lasting support.

“People returning and finding their homes in ruin have other priorities than supporting local animal shelters,” ROLDA’s website notes. “We want to offer a long term commitment to these Ukrainian shelters that need our support.”

She added that she’s proud of how much ROLDA has been able to help so far.

“I am humbled and amazed by the amount of support received from people,” she said. “I am proud of how ROLDA responded to the Ukrainian animal crisis so far. We were fast, transparent, supportive and this happened because of each person who trusted and supported us, like Nina from LFT.”

ROLDA also received a grant from Lady Freethinker last year during our first-ever Urgent Need Grant cycle for the fantastic work they do to provide shelter, vaccines, sterilizations, medical treatment, and care to Romania’s stray dogs. 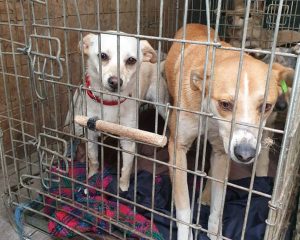