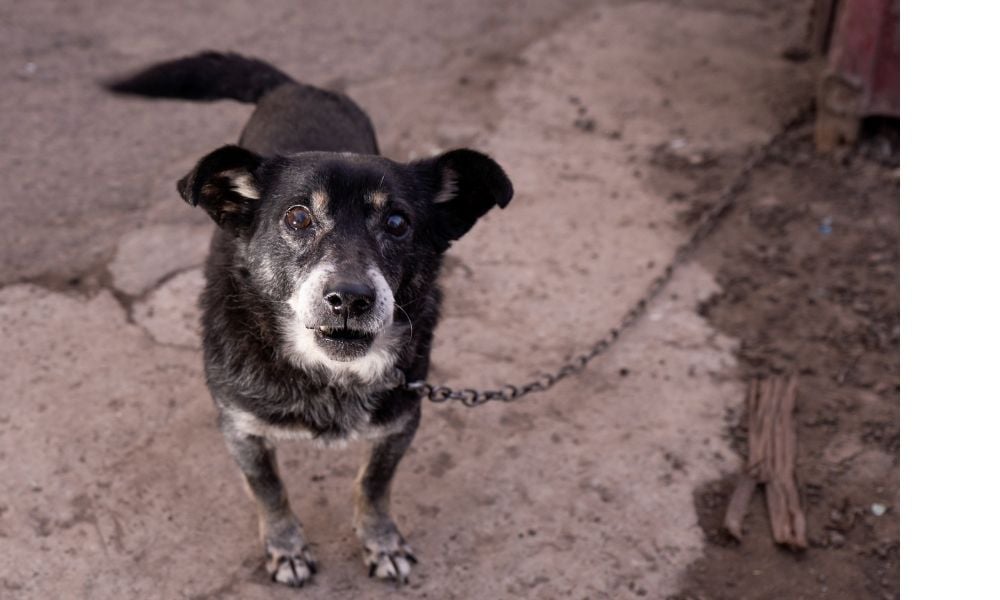 Dogs kept confined to chains for their entire lives in Charleston, South Carolina, can suffer horrifically — including being left 24/7 without adequate food, water, or shelter while also forced to endure extreme weather or other dangers.

Innocent dogs chained around the country have been found dead from heatstroke or dehydration in the summer, and they’ve frozen to death in the winter.

They’ve died from strangulation or been injured by tightened and tangled tethers that cut into their necks or limbs. They have high exposure to disease-carrying insects such as ticks, mosquitos, and fleas. Chained dogs also are vulnerable to aggressive wild animals or free-roaming dogs who might attack them, or cruel people who could seriously harm or kill them.

These innocent animals are forced to urinate and defecate in the same area where they eat and sleep, and they often live in filth.  Dogs trapped at the end of a chain also are denied basic dog behaviors, like running in the park, going on walks, or forming relationships with their guardians.

But now there is new hope for Charleston’s dogs.  The city is currently reviewing its animal cruelty rules, and officials are considering making tethering dogs illegal. Although the exact language of the proposal has not yet been released, it’s crucial that lifesaving legislation banning constant tethering is passed.

Dogs are sensitive and social beings who suffer physically and psychologically when they’re kept in solitude at the end of a chain.  Cities all over the country, including Asheville in North Carolina, Newport News in Virginia,  Athens in Georgia, and most recently Georgetown, also in South Carolina,  have ordinances in place that ban keeping dogs chained up outside.

Chaining dogs is cruel and irresponsible — and it’s time Charleston takes a stand against this preventable suffering.

Sign our petition urging Charleston officials to help save lives by banning chaining and tethering in the city!