Q&A With Veterinarian Gwendolen Reyes-Illg: What You Need To Know About Farmed Animals and Pain

Home » Animals » Q&A With Veterinarian Gwendolen Reyes-Illg: What You Need To Know About Farmed Animals and PainBy Lex Talamo | July 7, 2022 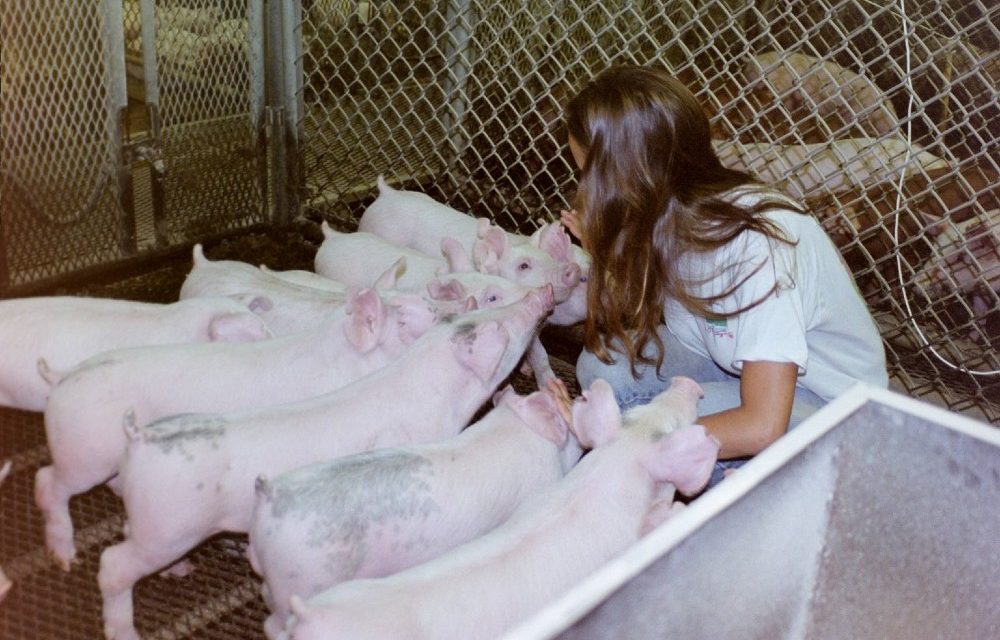 Veterinarian Gwendolen Reyes-Illg considers herself just another person who felt an early connection with animals and turned that compassion into a career.

But she was in for some surprises when she shifted her path from emergency medicine, mostly for cats and dogs, to farmed animals suffering within the animal agriculture industry.

She noticed the focus on compassionate care for companion animals, with minimized pain and discomfort, was lacking both within the industry and among many veterinary professionals who considered animals “food.”

“Everything we would learn in college and in vet school about farmed animals tended to be from a production perspective, which definitely didn’t resonate with me,” Reyes-Illg told Lady Freethinker. “I cared about them as individual beings.”

While farmed animals’ short lives in dairy and meat farms often involve painful procedures – including cutting off piglets’ tails or chickens’ beaks, or castrating male animals – the animals rarely, if ever, receive painkillers to help with their suffering.

When animals do receive treatment, the relief usually is only intended to last a few days at most – long enough to get the animal through the procedure, but not long enough to contaminate their meat for the journey from slaughterhouse to retailer or restaurant.

And while most people are quick to take notice of a pet in pain, a large sector of society is unaware of farmed animal suffering – and its  massive scale.

The Animal Welfare Institute (AWI), where Reyes-Illg also works as a veterinary advisor, recently published a new report showing that a majority of American consumers polled aren’t aware of the routine, painful procedures animals within the meat and dairy industries endure without painkillers — but also that people armed with that knowledge wanted to see conditions improved.

Although facing the truths of the suffering inherent in our current food system can be difficult, we hope this interview will help educate people and empower them to make more compassionate choices.

A Q&A with Gwendolen Reyes-Illg: Veterinary Advisor for the Animal Welfare Institute 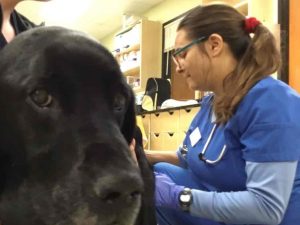 What kind of painful procedures — without pain killers — do farmed animals endure?

Castration is pretty universal among mammals. The veal industry is actually the only one that usually doesn’t do castration, because they’re killing the animals at such a young age. Cattle and goats often have their horns removed (dehorning) or prevented from growing (disbudding). When a dairy calf is being disbudded, typically workers take a hot iron and put it right where the little hornbuds are coming up, creating a third degree burn which prevents the horn from growing. Tail docking is done in cattle, pigs, and sheep. Though it is discouraged in dairy cattle, a significant percentage still have tails docked. Cattle being raised for beef in feedlots (typically the last stage of production) also have their tails docked. With pigs, tail docking is pretty widespread. Hens kept for egg-laying, turkeys, and breeding chickens commonly have the ends of their beaks removed, either with a hot blade or an infrared treatment, to decrease injurious pecking and cannibalism that are common under commercial conditions in which they are raised.

What scientific evidence is out there that farmed animals feel pain during routine procedures in agriculture operations?

We have so much evidence that they feel pain in a very similar way to what we would. There’s basic anatomy; they have the same basic kinds of pain receptors, and their nervous system follows the same track. We can see brain changes with EEGs, or electroencephalograms, and there are hormones and other biomarkers in the bloodstream that will change in response to pain. You can watch their behavior — thrashing around trying to get away and vocalizing at the time of injury — then changes in “activity budgets” (how much time they spend resting, eating, grooming, etc.) in the period afterwards.

There’s also been a lot of recent research to try to quantify pain. A newer one is called infrared thermography, which is basically creating an image of the temperature of the skin. When an animal gets a very painful stimulus, the body releases a surge of adrenaline into the bloodstream and the adrenaline causes the blood flow to shift. The vessels on the surface of the skin will constrict, and you’ll have a drop in skin temperature. You can use these special cameras that give you the temperature profile in the image, and you can see when the knife cut was made for a castration (for example).

Facial Grimace Scales have been developed for several different species, including cattle, pigs, and sheep. They instruct observers to focus on certain changes in facial expression that indicate pain. These changes, like squinting of the eyes, muzzle tension, and ear position are pretty subtle, unless one has been trained to look for them.

How common is the use of painful procedures without painkillers in the animal agriculture industry?

Almost all categories of farmed animals undergo painful procedures, with the exception of chickens raised for meal and calves raised for veal. Cattle are the species most likely to receive at least some kind of pain medication for some procedures. Pigs and chickens generally do not receive any pain medication. With chickens, there appears to be little to no interest in pharmaceutically alleviating pain from beak trimming/de-beaking.

With the pork industry, pretty darn near a hundred percent of male pigs are castrated in the U.S., and I would say less than 1 percent of the time are pain medications used. For cows, with the hot iron disbudding to prevent horn growth, a recent survey found that less than 20 percent of producers said they “always” used pain medication for disbudding, despite industry standards ostensibly requiring it. With hot-iron branding — which causes a second or third degree burn that takes close to three months to fully heal — only about 5 percent of survey responders who brand cattle reported that they “always” provide pain medication and the majority reported that they “never” do so.

A dose of pain medicine may last for 24 hours, maybe 48, but the pain from branding is known to last for weeks.

Why isn’t pain relief more prevalent during these procedures?

In some cases, it’s historical precedent. With things like branding and castrating cattle, which were going on before we had feedlots, there’s a large component of tradition: “Well, my grandfather never gave pain medicine to the cattle. Why would I do it?”

There is also the problem that there are currently no pain medications that are FDA-approved for treating pain caused by these procedures. Getting FDA approval for a specific indication is a massive undertaking. Part of getting that FDA approval is proving that that the pain medication works in, say, a 3-day-old pig. Quantifying pain in newborn animals isn’t always an easy undertaking. Extensive studies are also needed to prove that none of the drug will remain in meat harvested from the animal after he or she is slaughtered.

But I don’t want to point the finger necessarily to the FDA, because it’s also been a decision by pharmaceutical companies: There’s a more guaranteed market for pain medications for dogs and cats or for other drugs for farmed animals, and pharmaceutical companies have made decisions to seek FDA approval for drugs that they predicted would generate greater profit than pain-alleviating drugs for farmed animals.

This creates a hard situation for veterinarians (who would prescribe the pain relief). They have drugs that they know work, and that they can legally prescribe, even though they aren’t FDA-approved for that purpose – it’s called “extra-label” drug use. But, if a producer markets an animal who has leftover drugs in that meat, that’s a really big deal, considered a food safety issue, and inspectors would go back and say, ‘Well, who’s the veterinarian who prescribed this medication?’ The veterinarian is liable when drugs are used in an “extra-label” manner. So veterinarians not only have to convince a producer or a farmer, “Hey, it is good to control pain, I know it costs a little extra, and I know your grandfather didn’t do it, but for all these reasons, it’s worth it,” but they also have to take on that additional liability.

I also think farmed animals’ suffering is often unrecognized. So many of the painful procedures are just accepted as “normal” husbandry.

What can everyday people do to help stop the suffering of farmed animals from painful procedures?

As a society, one component is reducing consumption of animal products. For example, the motivation for keeping so many pigs in such a small, barren area where you’re having to cut off their tails to prevent tail-biting, is increasing demand. If we had a lower demand, then raising animals in less intensive conditions would be a bit more practical. That’s kind of a given, so can you decrease your consumption of meat and other animal products?

Legislative approaches are sometimes an option. For example, in Ohio, there are Livestock Care Standards that are supposed to be regularly updated. People can speak up during the public comment period when standards are reviewed and request mandatory pain management. We’re hoping that in the future there might be legislation to make it easier for pain drugs for farmed animals to get approved by the FDA.

People also can lobby grocery stores and retailers and say, “Hey, we want to make sure that we’re not consuming animal products from animals who are undergoing painful procedures with no alleviation of that pain.” That may, over time, spur the industry to do what it needs to do to mitigate the pain.

How do you feel about the future landscape for farmed animal suffering?

I think the time is right in veterinary medicine — at least, there seems to be a lot more concern about farmed animal pain. Even as some industry vets seem to be defending whatever practices are convenient or profitable for the industry, I am also starting to see more vets taking that patient advocacy position. So it’s an exciting time to be working with others with a similar orientation. 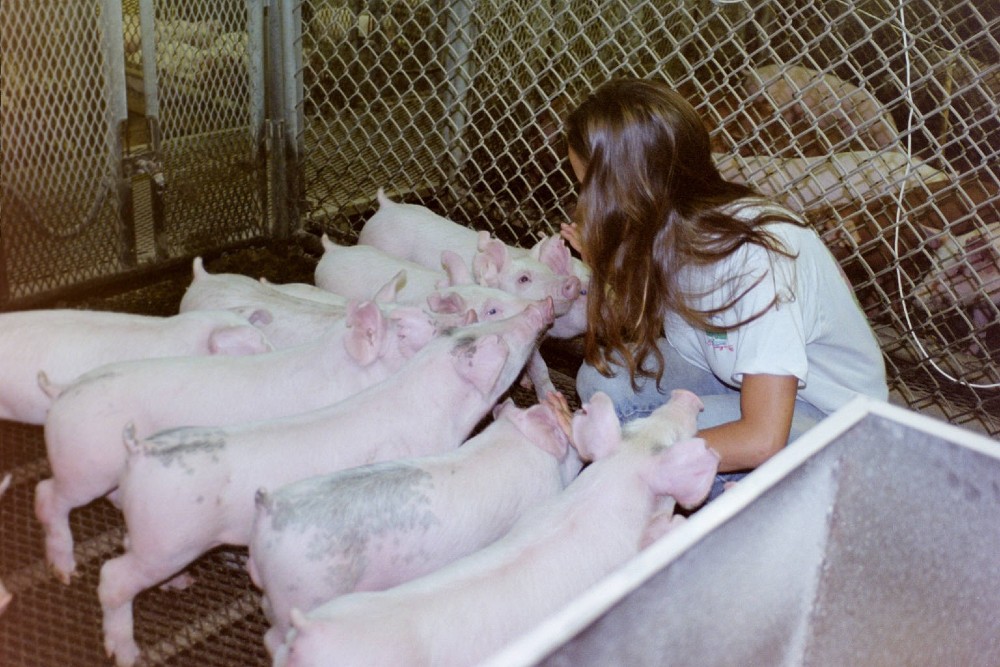