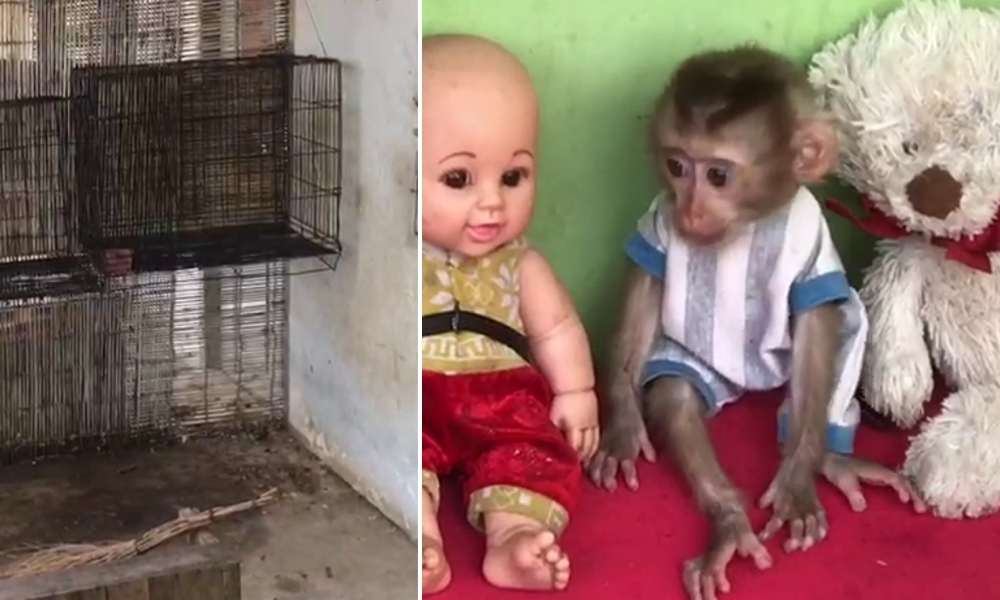 Lady Freethinker and Action for Primates have welcomed action taken by the authorities in Cambodia that has resulted in the confiscation of 13 pig-tailed and long-tailed macaques.

The macaques had been illegally poached from the wild as infants and kept captive as ‘pets’ in human households. They were seized in accordance with the country’s wildlife legislation. The monkeys were being used for online entertainment on social media platforms, such as YouTube and Facebook.

A joint investigation carried out in Cambodia in February of this year by Action for Primates and Lady Freethinker found that the reality for monkeys kept as “pets” is very different to the glamor of the colorful matching outfits and synchronized moves that are broadcast on often monetized social media platforms. Substantial harm, suffering and distress is inflicted on these baby monkeys, deprived of their mothers and cruelly controlled and manipulated to “perform” on camera, often several times a day. Other monkeys are deliberately placed into frightening and distressing situations from which they cannot escape. Their reactions, including obvious signs of terror, screaming and violent struggling, are then filmed for the online “entertainment” of viewers.

Such videos also normalize the incarceration of wild baby monkeys as well as perpetuating the legal and illegal trade in wild monkeys as “pets.”

Action for Primates and Lady Freethinker launched a campaign and sent a dossier of information to the Cambodian authorities urging them to crack down on the illegal keeping of macaques in private homes and confiscate any illegally held captive monkeys so that they may be relocated to a reputable sanctuary.

Sarah Kite, Co-founder, Action for Primates, stated: “Action for Primates is encouraged with the action taken by the Cambodian authorities. We hope this confiscation will send an important message and deter other people from keeping and mistreating monkeys. Animal cruelty in the guise of ‘entertainment’ must never be tolerated and it is shameful that YouTube and other social media platforms continue to allow such content to be posted.”

Nina Jackel, Founder, Lady Freethinker, stated: “Holding monkeys captive as ‘pets’ for exploitation on social media is highly cruel, as demonstrated in LFT and AfP’s recent investigation. I’m grateful to Cambodian officials for taking action to help these animals who were illegally poached for human gain, and encourage further enforcement to help end the epidemic of abuse of baby monkeys.”

An educational video showing the horrific truth behind the scenes for these defenseless animals is available here. Viewers should be aware that the footage includes distressing scenes.