RESCUE UPDATE: Dogs Flown from China Are Thriving in Their Forever Homes 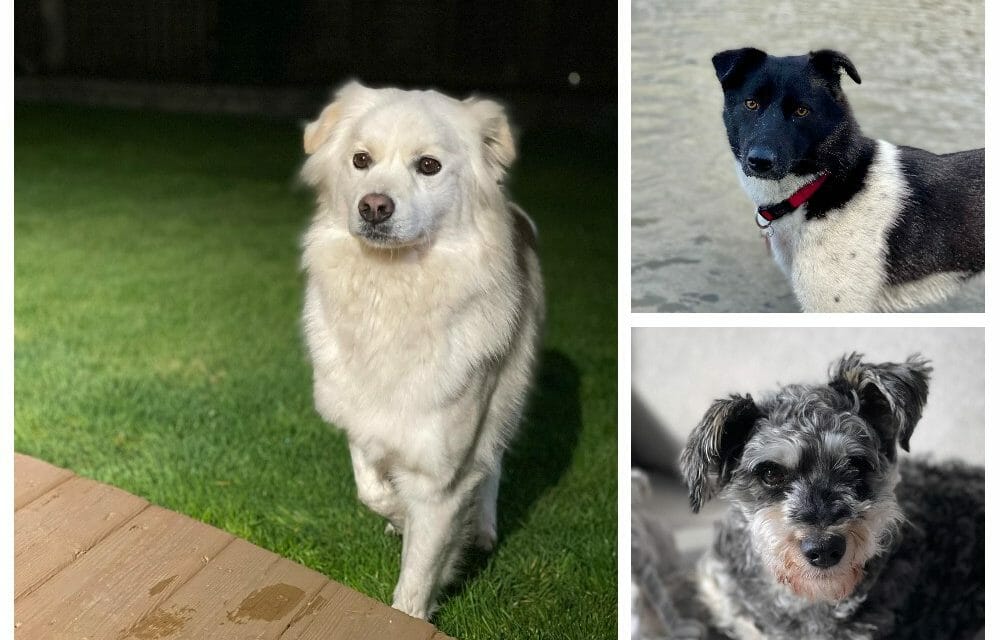 (Courtesy of Stacey, Rita, and Robert)

In March, Lady Freethinker sponsored the flight of 21 dogs coming from dire situations in China to forever homes in Canada, in collaboration with World of Angels and Rescue Paws Canada.

We’ve since been able to connect with three of the caring families who opened their hearts and their homes to some of these precious pups, including Cooper, Pepper, and Akela, whom you’ll meet in the heartwarming stories below.

All three families exuberantly told Lady Freethinker they’d go through the adoption all over again, and emphasized their hopes that other prospective pet parents would adopt – rather than shop – when adding a dog to their families.

We hope you enjoy their stories as much as we did! 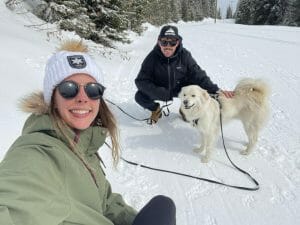 One pup, now named Cooper, came from a dog who was pregnant when her family was considering selling her to a dog meat truck in China, Yi Ping Lai said. A kind woman rescued the mother, who promptly gave birth, and then transported the canine family to World of Angels’ shelter in Beijing.

Cooper is now “living the dream life of a big dog” with the Smiths, Yi Ping Lai said.

“The family is young and active, loves the outdoors and hiking,” she said. “And there’s snow!”

Stacey Smith said she and her husband had been considering adopting for a while, but when she saw the fluffy Cooper, whom she described as having “the kindest eyes” – she knew.

She put in an application, got approved, then waited nervously at Vancouver International Airport to meet Cooper for the first time. New adventures followed involving leash practice, getting used to new sights and sounds, and lots of treats and positive reinforcement for Cooper, and learning not to make any swift movements for his people.

“He growled a few times when he was unsure,” Stacey said. “But after a couple of days he seemed to realize  that we only had his best interest at heart, and he became more cuddly and responsive to our voices.”

The Smiths got an unexpected helper in bonding with their new dog.

“We noticed a huge shift in him when we took him to the snow for the first time,” Stacey said. “This was the first time we saw him jump around and act fully like a dog. We think him experiencing this joy and playfulness really helped play a huge role in him settling in.” 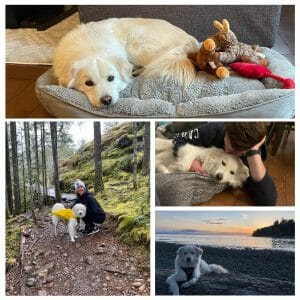 Stacey, who works from home, said Cooper also has helped her settle in to new routines, including getting out to walk around the neighborhood during the day, which has helped her mentally and physically.

Cooper is now getting to be a pro at hiking along the beach or through forest, as well as respectfully interacting at the dog park. His love of nature has reinforced what the family now knows was an absolutely right choice.

“We knew adding a dog to our life would benefit our life, however we had no idea just how much until Cooper came home,” Stacey said. “Seeing how happy he is being off leash and enjoying nature has made us realize that he’s the perfect fit for our family.”

PEPPER: A Pooch With ‘Personality’ 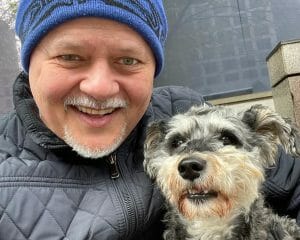 A feisty and obstinate Schnauzer, once named Angie and now named Pepper, was one of several that World of Angels rescued from a Chinese puppy mill that went out of business, and who otherwise likely would have been sent to slaughter, Yi Ping Lai said.

World of Angels quickly found homes for China for many of the Schnauzers but had to hang on to Pepper, who had a severe skin problem when she arrived.  That ended up being a lucky twist of fate for the pup, who now has a devoted forever home with Robert Clifton.

“Pepper’s dad is in love with her,” Yi Ping Lai said with a laugh. “They are inseparable.”

Robert told LFT he had started searching for a canine companion after hearing stories from a friend, who adopted a dog from South Korea, and seeing the strong bond that formed between his mother and her Schnauzer, whom she adopted from Mexico.

When asked to elaborate, Robert said, “Something told me she would be a character. And she is. She definitely has a lot of personality.”

The days leading up to meeting Pepper at the airport involved lots of shopping, he added, so that Pepper could come into a home with toys, blankets, and a leash and harness waiting for her.

The delays at the airport didn’t dampen his anticipation and excitement, particularly given that Pepper’s crate was one of the first unloaded – as identified by a characteristic Schnauzer bark, made hoarse likely from hours of barking.

Knowing what a long day she had, and also heeding the advice of rescuers to allow the dogs to acclimate rather than immediately unleashing them from their crates, Robert’s first order of business was getting Pepper home.

A bath came next. While Pepper had been “beside herself” to get out of her crate, Robert said she was calm and docile while he washed her.

“From that moment, she hasn’t really left my side,” he said. “It’s been really nice to see the quick bond that she has formed with me, and she is my constant companion.” 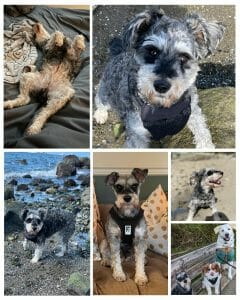 Pepper snores, like he does, Robert said. She also likes to take over his bed, with her legs kicked up in the air. She also keeps him company while he works from home, given his ongoing health complications from COVID-19, and has helped him be more active.

“When dealing with chronic health conditions, it can be difficult to get into routines,” Robert said. “The lease on life she has given me is stretching my legs, getting out there, and it contributes to my well-being.”

He added that the patience he’s cultivated over the years as a former middle school teacher, and now as a university lecturer, have well prepared him to help Pepper overcome her uncertainties and reactiveness when leash walking.

“She is so intelligent,” he said. “I know she is trainable, and that it will come with time, and I am a patient person. I can give her that patience, understanding, care and compassion.”

Pepper also needs some expensive dental work, but Robert said she’s worth it.

“There’s something that having a companion animal does for your heart and spirit,” he said. “Not only do you feel that unconditional love, but also a sense of purpose and giving back. Consider adopting a rescue. The need is there.”

AKELA AND OAKLEY: “Two Peas in a Pod” 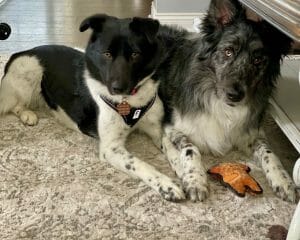 World of Angels rescued Akela, a border collie-type mix, from a home where about 40 other dogs also were seized after police responded to a noise complaint and found a dire situation, Yi Ping Lai said.

From that sad situation, Akela has moved into a forever home with two loving humans and another border collie mix named Oakley who “looks like her,” Yi Ping Lai said.

The plan originally wasn’t to adopt Akela, but rather to foster her until she could find a forever home, said her now-guardian Rita Chanthaboury.

“When I heard that so many of these dogs were being rescued from abuse, neglect, and most tragically being slaughtered, I felt we had to save at least one dog from this terrible fate,” she said.

When coordinating with Rescue Paws Canada, Rita’s only stated preference was that she and her partner John would be happy to take a medium or a large dog, since so many places have restrictions on larger animals.  Rescue Paws came back with an offer of a female border collie-mix.

“I was so excited to hear this,” Rita told LFT. “It must have been fate, because we have a border collie mix named Oakley, and we had discussed getting a border collie- Lab mix for Oakley to have a sibling.”

Although Rita said she fell in love at first sight, it took Akela – formerly Bei Bei – a few days to warm up to her new surroundings. The long and arduous flight had unsettled her, and the new smells and sounds were overwhelming.

Although she sniffed every nook and cranny of the house upon entering, letting Rita see “how intelligent and curious she was,” for the first three days, Akela hardly left her crate.

But then, with the help of Oakley and lots of love and patience from the humans, Akela realized she was home.

“My favorite first memory was seeing her approach my partner, John, for the first time for affection,” Rita recalled. “Another special moment was watching Akela and Oakley giving each other tender puppy kisses. Oakley and Akela are two peas in a pod. They cuddle together, play together, eat together, and sleep together.” 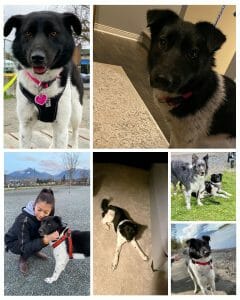 She added that the moment she spotted Oakley leaning in as Akela gently groomed his face was the moment she knew “we were going to fail as fosters.”  The donation and adoption form got sent in, and Akela got an engraved tag with her name.

“I absolutely adore seeing how much she has grown in only six weeks,” she said. “It feels like we have had her forever as she fits our home so well. I couldn’t imagine not having her. I absolutely would do it all over again.”

Rita also encourages people to adopt animals, rather than shop for them, with words of high praise for World of Angels.

“These rescue groups are true heroes, as they not only help animals, but they help humans whose lives have been changed by finding their ‘furever’ rescued companion,” she said. “I have been so happy with the whole process.”

She also had some excellent advice to offer.

“A piece of advice for future fosters or adopters is to be patient with your new dog and make sure to remember that they take time to adjust and warm up,” Rita said. “Don’t give up on them, as they need to learn that their new environment is going to be their safe haven.” 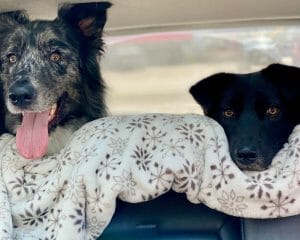