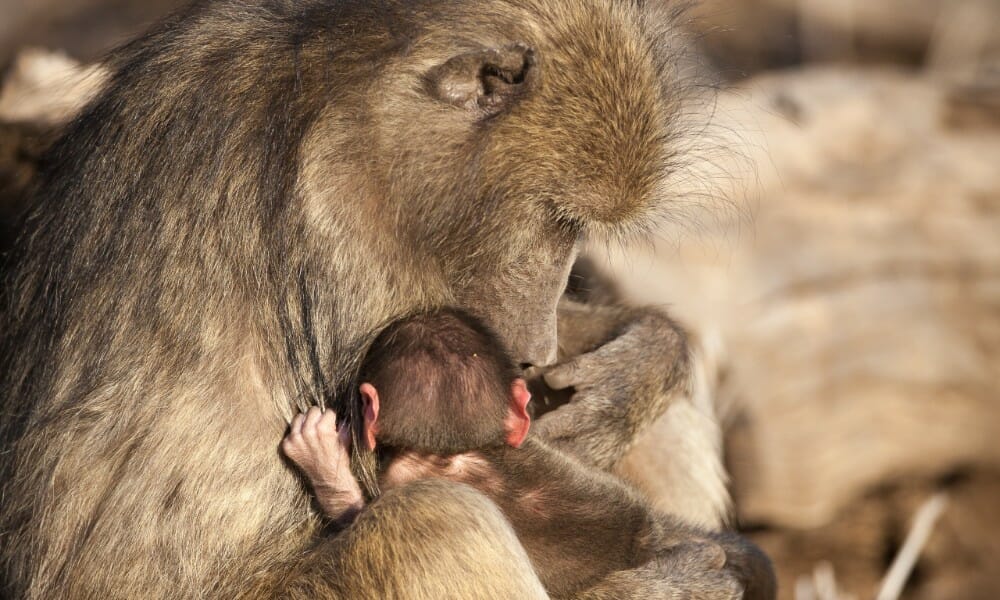 Jemma, a 16-year-old, pregnant baboon, was lying on the floor of her cage salivating when researchers at Eastern Virginia Medical School (EVMS) found her on June 15, 2021.

Medical records obtained by Lady Freethinker, via a public records request, revealed that Jemma, also known to researchers as #26876, was being treated with Letrozole – an inhibitor meant to decrease her estrogen levels during a critical time in her pregnancy so researchers could analyze the impact on her growing baby.

Other baboons treated with Letrozole had spontaneous abortions or seizures, with researchers finding them comatose in their cages, the documents also noted.

Jemma’s seizures had started as early as May 21, when clinical staff also noted “abnormal behavior,” according to the public records documents. She also was found unresponsive in her cage by a tech at 6 a.m. on June 16.

The very next day, on June 17, Jemma – who was at term with her pregnancy – was sedated and cut open via a Cesarean section through which researchers extracted and killed her breathing baby so they could harvest the tissues. 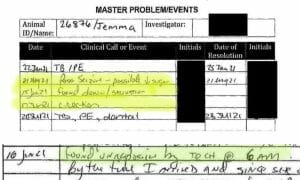 Sadly, it wasn’t the first time Jemma had undergone this grotesque procedure. She also underwent C-sections on April 18, 2019, and January 10, 2020.

She also wasn’t alone in undergoing the major, repeat C-section surgeries at EVMS, in which researchers removed and “euthanized” baboon’s developing fetuses.

The federal Animal Welfare Act mandates that animals used in research can only undergo one major surgery without specific approval.

Despite that mandate, EVMS’ plan for these mother monkeys was to permit up to six C-sections before the animals, reaching that maximum, would be killed, according to university documents.

Before that could happen, the U.S. Department of Agriculture (USDA) stepped in with an official warning in October 2021, stemming from a Sept. 14 inspection report, which noted the multiple surgeries. EVMS appealed the citation, but public records documents obtained from the USDA via a Freedom of Information of Act request show the USDA ruled their decision was final.

Meanwhile, these cruel baboon pregnancy experiments – which have been funded since 1981 without any direct clinical application as of yet for humans – are scheduled and funded through at least June 2024, including via the National Institutes of Health (NIH), a federal agency funded by taxpayer dollars, according to the public records documents.

The study in the latest approved 3-year grant cycle authorizes use of more than 150 animals, including at least 63 developing fetuses cut out and killed, 35 baboon mothers,  and 40 baboon babies allowed to survive who then will undergo regular testing for up to 15 years before they, too, are killed.

EVMS stood by the experiments, telling Lady Freethinker that they provide “vital insight.”

“As evidenced by the continuous funding of this line of research for roughly 30 years by the NIH and other funding agencies, and by the volume of knowledge generated as evidenced by the nearly 200 journal articles and book chapters that have followed as a result, this research provides vital insight,” EVMS said via email. 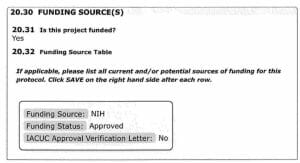 The specific EVMS  baboon pregnancy studies covered by the documents LFT received, ongoing since at least 2015 and scheduled through at least 2024, aim to look at the role of estrogen in interactions between the mother, fetus, and placenta, how estrogen levels impact the developing baby, and whether conditions in the womb can impact adult onset disorders such as high blood pressure and diabetes.

To test their theories, researchers proposed to increase or decrease the amount of estrogen in the mothers’ bodies during key trimesters — then to extract, cut open, and analyze the fetuses during the early, mid, and late terms of a normal pregnancy cycle.

Researchers said the implications for maternal and fetal medicine – including for the human conditions of poor fetal growth, pre-eclampsia, infertility, or premature birth – could be “profound.” But they also told their animal care use committee, which is mandated to oversee and approve the treatment of animals in experiments, that they couldn’t ethically conduct the experiments on humans.

Instead, they proposed conducting the invasive surgeries on baboons (Papio anubis/cynocephalus) as unfortunate stand-ins.

Depending on their treatment group, pregnant baboons – whose normal gestational period is 185 days – would undergo C-sections, notably at days 60 through 175. The extracted fetuses would be dissected for their skeletal muscle, fat, livers, lungs, hearts, and pancreases.

A small number of mothers would be allowed to deliver their babies, with documents for the current grant cycling showing 40 delivered babies from 136 pregnancies – or 29 percent. The study says the babies would be tested through adolescence, for up to 15 years, to see if they developed any adult onset conditions before researchers also killed them.

Outcomes for the mother baboons included getting impregnated again in the breeding colony, being transferred to another EVMS experiment or to another research facility, or being killed via Beuthanasia-D solution – an injected euthanasia drug.

Adoption or relocation to a primate sanctuary was not listed as an option on the standard form researchers submitted to their animal care use committee, although scientific studies have shown that primates used in research can thrive in sanctuary life.

When asked about direct, clinical treatments for humans stemming from the studies, EVMS once again referenced the published studies, said they had resulted in “publication of an invited review,” and also forwarded a link to a study that noted baboon studies “could have important implications” for developing human treatments — underscoring that those treatments still do not exist.

Meanwhile, hundreds of baboons and their babies have suffered and died, with many more planned for the same grisly fates. 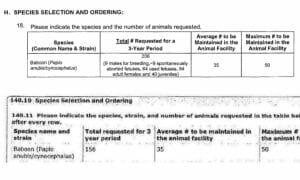 Those numbers also are a severe undercount of the total suffering, as EVMS reported an ongoing collaboration with another research institute, whose name was redacted in the documents LFT received, which makes them responsible for only half of the study’s needed pregnancies.

EVMS noted it would need to purchase between three and five new monkeys each year to continue their research, in addition to the ones they are breeding on-site, to counter what they called “turn over” in the breeding colony.

Violations of the Animal Welfare Act

EVMS told Lady Freethinker that their program follows the “strict guidelines and regulations governing this type of work.”

“Every effort is made to ensure that the minimal number of animals are impacted for the research and that they are provided the best possible care,” EVMS said via email.

EVMS had no noted noncompliances at its most recent USDA inspection on Jan. 26, 2022, when inspectors noted at least 60 animals on-site, including 10 crab-eating macaques, 24 rabbits, 16 olive baboons, and 10 rhesus macaques.

But the USDA, on Oct. 28, 2021, filed an Official Warning against EVMS when inspectors found staff had conducted more than one major operative procedure on Jemma, Juju, and Tara without prior approval from its Animal and Plant Health Inspection Service (APHIS).

EVMS, when submitting the project to its animal care use committee, justified the surgeries by saying: “Multiple use of the same baboon reduces the total number of animals required…. One animal rather than five animals are studied.”

The university appealed the USDA’s documentation of two “critical” citations in the September 2021 inspection documentation, which included the repeat C-sections on the three female baboons, and an injury to a chinchilla, according to the USDA report.

But the USDA declared its decision on the C-section violations final, writing: “The protocols indicate animals will be undergoing multiple major surgeries but do not provide a scientific justification nor have approval from the administrator.”

USDA records show a total of 2 critical, two non-critical, and three teachable moments at EVMS, with noncompliances noted at four of nine site inspections – or 44 percent – since 2014.

Other violations included the death of an animal due to a “self-inflicted injury by an enrichment device” in 2014 and an inaccurate annual report about animal use during the 2014 fiscal year.

“Teachable moments,” a USDA classification that refers to noncompliances that need to be addressed or that could become violations, related to the university’s needing to conduct an alternative search narrative for procedures that could cause more than momentary pain or distress; to complete descriptions of propose animal use, including anesthesia and an experimental plan; and to include training with instructions and guidance to personnel on how to provide proper post-procedural care, according to the public records documents.

In addition to the documented ill-effects and outcomes of the studies – seizures, spontaneous abortions, euthanasia – the monkeys at EVMS show other signs of suffering as well.

Jemma, Juju, and and Tara – who were acquired by EVMS from the Texas Biomedical Research Institute in 2011 and 2012 – all had alopecia, or sudden hair loss, noted during subsequent physical exams.

All three primates also were missing either fingers or toes. 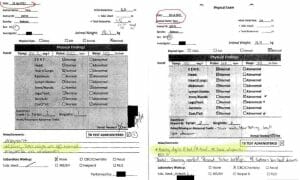 Juju’s July 2021 physical exam showed she also was missing digits on her left foot and her left hand.

Jemma’s physical exam in January 2021 showed she was missing “all four digits” on her left hand. A July 2021 physical exam also reported an exposed nerve in her upper canine and missing hand thumbs.

Several published studies indicate that primates used in research can, under stress, turn to self-mutilation, including self-biting.

EVMS said each of the three female baboons arrived at the university lab missing at least one digit on their foot or their hand. Their response did not specifically address how Tara lost another digit between January and July 2021, when she was in EVMS custody, but they added in their response, “We pair house the baboons and, like their counterparts in the wild, they sometimes fight.”

Documents obtained from the USDA for the 2013-2014 reporting period also showed that dozens of baboons were kept singly housed during research at EVMS, with justifications on the form including “injury to themselves or another animal” or “aggression.” 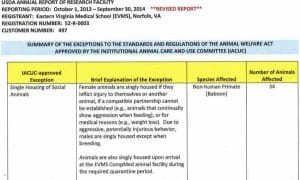 Lady Freethinker also asked EVMS why relocating the baboons to a primate sanctuary, rather than killing them, wasn’t currently an option.

“We appreciate the comment and will keep these suggestions in mind in the future for these nonhuman primates,” EVMS responded.

A growing number of scientific studies show that experiments on animals are unsafe, unreliable, and costly for humans.

Although EVMS says in its project documents that no human biology-based alternatives that currently exist would allow the needed interaction between mother, baby, and placenta, the fact that their research has been ongoing since 1981 – with no immediate, translatable treatments for human mothers or babies – is another example  of how studies centered on animal testing require decades of time, money, and brain power that, to date, have had no immediate benefit for people.

Sign our petition urging an end to these cruel and painful experiments for monkey mothers and their babies and for the research facility to add relocation or adoption to a reputable primate sanctuary as a viable outcome for theses innocent animals who could very well live out their lives peacefully there — which is no less than they deserve.