It’s the Lunar Year of the Tiger: 3 Things You Need to Know to Help This Endangered Species

Home » Animals » It’s the Lunar Year of the Tiger: 3 Things You Need to Know to Help This Endangered SpeciesBy Lex Talamo | February 4, 2022 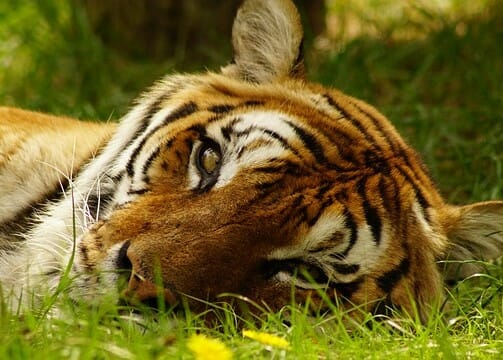 The Lunar New Year started on Feb. 1, and it’s the Year of the Tiger.

The holiday, celebrated in many Asian countries, historically is a time for honoring family, friends, and ancestors, as well as ushering out any bad luck or negativity that accumulated during the past year. Each year also represents one of the 12 animals of the Chinese Zodiac, and 2022 is the year of the Water Tiger.

Asian cultures associate tigers with strength, bravery, clearing away evil, and taking action – and tigers need your help now. These beautiful animals – though endangered – continue to be exploited and poached, from being exhibited for profit at roadside zoos to being slaughtered for their body parts, which are then sold as “medicine.”

Here are three main issues facing our world’s precious tigers and how you can help them – starting right now.

TIGER EXPLOITATION IN ROADSIDE ZOOS: Stay Away from “Selfies” and Photo Ops with Tigers and Other Big Cats

The allure of big cats continues to bring in big bucks for unscrupulous breeders and exhibitors who allow tigers’ appeal to draw unsuspecting customers to roadside attractions that often are inhumane and unsanitary behind the scenes.

This year, an undercover investigation from Lady Freethinker exposed conditions at several zoos in the Philippines that allow tourists to feed and take photos with tigers kept chained in small enclosures.

Video captured one of the beautiful animals pacing restlessly in a concrete cell – a clear sign of zoochosis, or severe psychological distress. Wildlife experts who viewed the footage told us the big cats appeared malnourished and that the conditions in which they were kept were inadequate and inhumane.

But the situation is far from unique to the Philippines, with licensed exhibitors displaying suffering cats at roadside zoos in the United States for people’s “entertainment.”  While some – including notorious exhibitors “Joe Exotic” and Jeffrey Lowe — have been held accountable for their atrocious actions by federal authorities, many other exhibitors continue to circumvent enforcement action.

Animal lovers should be aware that forced human-animal interactions often are very stressful for the animals, and should beware of any venue that offers opportunities to feed adult tigers or pose with them for a picture, especially given the added health risks due to COVID-19, Tricorache said.

“I understand that big cats have contracted COVID, presumably from humans, so the closeness of both species should not happen,” she said.

Any venue that offers photo opportunities or “petting” with cubs also should be avoided, she added.

““In my experience with cheetah cubs, broadly used for selfies and petting mainly in South Africa, the cats suffer many diseases due to stress,” Tricorache said. “Another negative part is the fact that encouraging such interactions with children can make the kids lose awareness of the fact that these animals are wild. Exotic pet ownership is probably a desire that is born from having such interactions since they grow up thinking that it is ok to hold these animals prisoners.”

While U.S. facilities legally can exhibit captive tigers with proper licenses and permits, people concerned with the well-being of animals should stay far away from any venue that features cub petting.

“People go to cub petting facilities or roadside zoos and they pay to pet, to take pictures with, to play with and bottle feed big cat cubs, and they pay a lot of money for this,” Prygoski said during an hour-long ADLF webinar. “Then they get their pictures, they leave the facilities, most of the time completely unaware of what’s going on behind the scenes or what happens to the cubs after they have left the facility and posted their pictures to Instagram.”

You can read Lady Freethinker’s full story on the dangers and gruesome realities of cub petting here.

TIGERS KILLED AS COMMODITIES: Sign Our Petition to Take Action For Tigers Slaughtered and Sold for Their Body Parts.

An estimated 7,000 to 8,000 tigers were being illegally farmed on more than 200 farms in Asia so that wildlife traffickers could slaughter the animals and boil their bones into “glue” sold on the black market as a “health” tonic to wealthy elites, according to a new study from the University of Copenhagen.  The study also found traffickers preferred to get bones from poachers capturing and killing tigers from the wild.

The COVID-19 pandemic has increased demand for this tiger “glue” in a travesty denounced by officials in the countries where markets and producers are prevalent, including Vietnam. Teeth, claws, and skin from the animals also sells as “luxury items,” according to the study.

Vietnam’s Central Committee for Propaganda and Education (CCPE), British Ambassador to Vietnam Gareth Ward, the USAID Vietnam Mission Director, and the Director of Viet Nam CITES Management Authority collectively raised their voices to crack down on the illegal trade in a recent campaign funded by the UK Government.

“On this occasion of the New Year of the Tiger, let’s get the message out there to your family and friends that it’s not okay to use tiger bone glue and tiger products, or any other illegal wildlife products,” Ward said in a translation of the campaign video. “Report those who illegally trade in these products and encourage your family and friends to find alternative methods and medicines instead of tiger products.”

If you haven’t already, sign our petition urging Asian authorities to crack down on poaching and the illegal farming and sale of endangered tigers for their body parts.