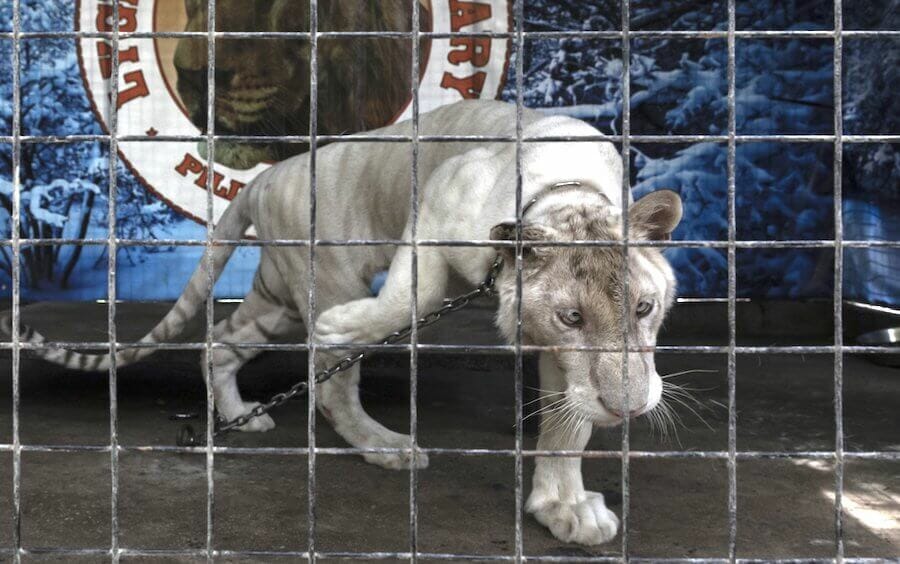 UPDATE (11/16/2022): The Bureau of Animal Industry on Jan. 7 sent a letter to the Department of Agriculture’s Committee on Animal Welfare, asking for a meeting to discuss Lady Freethinker’s concerns. We then learned an investigation opened, and that our investigative findings had been received and recorded. We’ll keep watching the situation at these zoos. —Lady Freethinker Staff

A captive tiger, chained in place, sucks on a baby bottle as tourists crowd around and touch him at Zoobic Safari in the Philippines, reveals a new undercover investigation from Lady Freethinker (LFT).

The visitors captured the moment — which wildlife experts told LFT would be extremely stressful and psychologically damaging to the captive animals — for the equivalent of $10 USD, according to the zoo’s website.

At Zoori Residence Inn, another zoo in the Philippines owned by the same company, a frightfully thin lioness approached a shallow pool of green slime inside a barren, filthy enclosure while her partner — a sickly lion inside a haggard frame — looked on.

These heartbreaking realities were just some of the horrific conditions documented at five popular zoos in the Philippines — Avilon Zoo, Lyger Sanctuary, Zoobic Safari, Zoori at Residence Inn, and Zoocolate Thrills — that spanned from malnourished animals left without access to clean food or water to macaques, a sun bear, and chained big cats pacing in circles inside filthy and inadequate enclosures.

LFT’s investigation also revealed forced interactions and photo opportunities between visitors and wild animals at the zoos, such as captive chained tigers being used for “selfies” or photo props. At Zoocolate, photo opportunities with unspecified “live” animals cost as little as 20 Philippine pesos– the equivalent of $0.40 USD.

No innocent wild animal deserves to suffer — or die — for human “entertainment.” It’s time to immediately end all inhumane visitor-wildlife interactions, including selfies with chained and captive big cats.

Sign our petition urging animal welfare regulators in the Philippines to thoroughly investigate conditions at these zoos, end tourist photo opportunities and “selfies” with big cats and other live animals, and demand immediate and critical improvements  — or relocations to reputable sanctuaries– of these suffering animals.

Then, take a moment to respectfully and politely reach out to the Bureau of Animal Industry and the Department of Agriculture (responsible for enforcing Animal Welfare Act guidelines), and the Southeast Asian Zoos and Aquariums Association (to which several of these zoos belong). Authorities have been responsive to our correspondence so far, so we want to respectfully keep the momentum building:

You can cite your own concerns or use our sample text below:

I am writing today to respectfully urge you to investigate animal welfare conditions at Lyger Sanctuary, Zoori at Residence Inn, Zoobic Safari, Zoocolate Thrills and Avilon Zoo. I was distressed to see images of animals at these facilities kept in small, filthy enclosures without clean food or water, big cats chained and used for “selfies,” and severely malnourished animals pacing in their cells – a sign of extreme stress. Some of these animals have died, and these zoos all have put out pleas on social media for support to keep their animals from starving. It’s clear that these facilities are no longer able to take care of their animals, as mandated in the Animal Welfare Act of 1998. Please do all you can to help these suffering and starving animals, including ending unnatural tourist photo opportunities and requiring immediate improvements or relocations to reputable sanctuaries.

Thank you for your time and consideration,