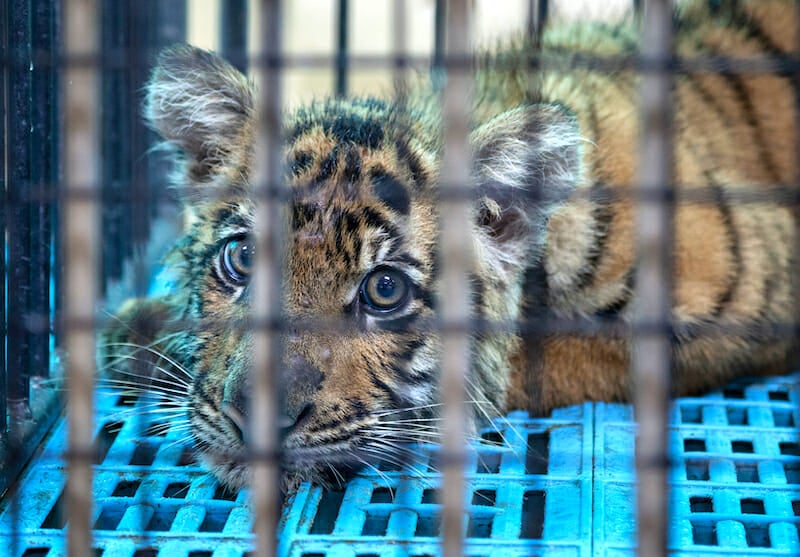 Tigers snatched as cubs from illegal breeding farms in Asia are first fattened and then as adults are gruesomely slaughtered for their skeletons so illegal wildlife traffickers can boil their bones in high-pressure cookers to create tiger bone “glue,” which is then mixed into wine or tea and sold as a daily “health” tonic.

Tigers are endangered animals, and any sale, transport, or storing of their parts is illegal.

But more than 200 illegal tiger farms – housing an estimated 7,000 to 8,000 tigers – were operating in China, Laos PDR, Thailand as of 2017, with the sap-like “glue” substance selling for up to $15,000 per kilo to buyers in Vietnam, Thailand, and other parts of Asia, according to a new study from the University of Copenhagen.

Tigers poached from the wild also were fueling the illegal trade, with bones from wild-caught tigers “preferred widely over farmed ones,” according to the study.

The demand for the illegal tiger “glue” also has increased during the COVID-19 pandemic, according to recent reports from the Environmental Investigation Agency.

These precious and endangered animals deserve the highest level of protection, and violators must be held accountable. Authorities must do more to crack down on the poaching, illegal farming, and sale of tigers and their parts.

Sign our petition urging the prime ministers and ambassadors of Vietnam, China, and Thailand to do everything in their power to require more vigilant and harsher enforcement for illegal wildlife traffickers slaughtering and selling endangered tigers for profit.