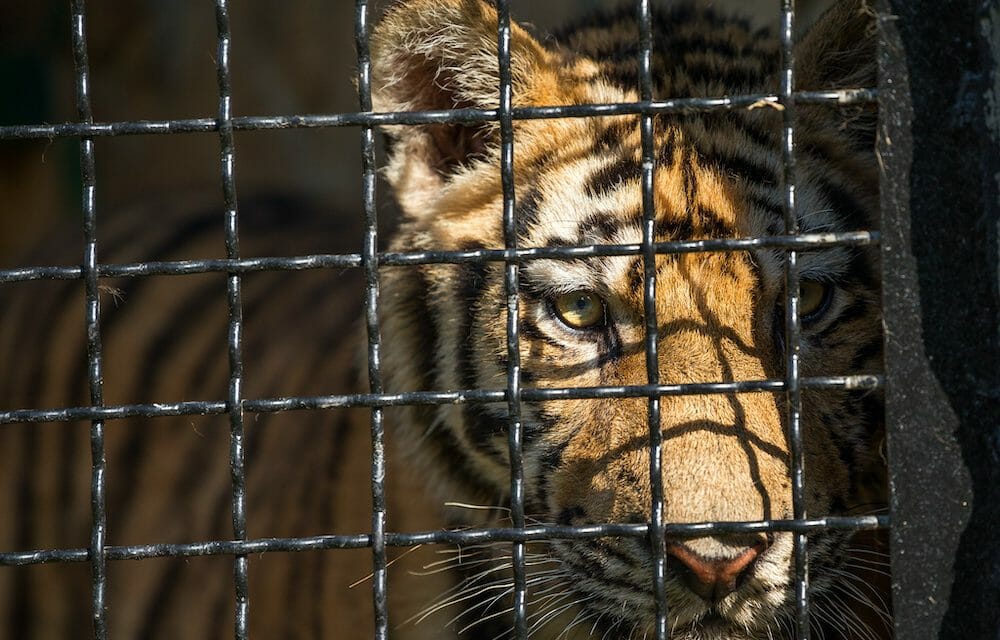 Young tiger in a cage via Adobe Stock

From illicit drug use to murder-for-hire allegations, Netflix’s newest hit docuseries Tiger King: Murder, Mayhem and Madness takes viewers on a rollercoaster ride through the twisted world of the big cat industry. Despite the wildly entertaining storyline, Tiger King unfortunately fails to offer anything more than a brief glimpse into the intense suffering endured by the big cat industry’s main victims — the animals.

While the show does reveal moments of animal cruelty — a particularly shocking moment is when Joe Exotic, the owner of an exotic animal park, uses a metal pole to pull a newborn tiger cub from her mother moments after birth — Tiger King refuses to marinate on the issue for longer than a few minutes, using the animals more as pawns to move the plot forward than the targets of an abusive multi-million dollar business.

One of the show’s primary subjects, Carole Baskins, frequently mentions the Big Cat Public Safety Act (BCPSA), but as a less-than-idolized character who is repeatedly accused of killing her husband, the bill tends to get overlooked. Here’s why the BCPSA actually matters:

Tiger King focuses on two or three roadside zoos, but the problem is much bigger than that. The number of captive tigers in the United States outnumber the amount of tigers in the wild, according to National Geographic.

Joe Exotic, Bhagavan “Doc” Antle, and Jeff Lowe’s outlandish behaviors might be unique, but their possession of big cats is not. In the United States, over 90 percent of captive tigers live in privately-owned locations – from roadside zoos and private breeding facilities to truck stops and urban apartment buildings. Specifically, 6 percent of tigers live in facilities accredited by the Association of Zoos and Aquariums. This poses a threat to the safety and wellbeing of both the animals living in inadequate conditions and the people interacting with them.

In some jurisdictions, it is easier to own a tiger than adopt a dog.

How is it possible that so many people – including those living in apartments – are able to have tigers as pets? With no federal law, the rules and regulations are decided by each state; and currently, only 20 states have comprehensive bans on owning wildlife. Of the remaining states, 13 have partial exotic wildlife bans, 14 permit private ownership of exotic wildlife with a license or permit, and 4 don’t even require a license or permit to own exotic animals.

In some jurisdictions, it is easier to own a tiger than adopt a dog, according to the World Wildlife Foundation. The Captive Wildlife Safety Act, which currently prohibits interstate and foreign big cat trade, is clearly not enough. Without stronger federal regulations, the big cat industry will continue to thrive.

Tigers are a public health concern and frequently tortured or killed for profit.

So, why should the big cat industry be shut down anyway? Tiger King hints at the answer – public health and animal welfare.

Privately possessing tigers and other big cats endangers the lives of the people around them. From 1990 to 2012, over 300 dangerous incidents involving big cats happened in the United States across 44 states, according to the Humane Society. In those incidents, 4 children and 16 adults died. Dozens more lost their limbs or suffered irreparable traumatic injuries.

Captive tigers are frequently the victims of animal welfare violations as well. The big cat industry mainly profits off of cubs, meaning adult tigers and other big cats are shipped off to inhumane roadside zoos or killed because the costs of caring for them are too high.

“… the U.S. Agriculture Department says only cubs between the ages of 4 weeks (no longer “neonatal”) and 12 weeks (when they become “too big, too fast, and too strong”) should be used [for petting and photographs],” the Washington Post reported. “That creates an incentive, critics say, for breeders such as [Joe Exotic] to pump out cubs – and a constant supply of 100-day-old tigers that have outgrown their value.”

If Tiger King guarantees one thing, it’s that current laws are inadequate. The Endangered Species Act bans the sale and possession of all species of endangered wildlife, but the rules for captive-bred wildlife are murky and not well-regulated. It is relatively easy to buy, sell, breed and exploit big cats without attracting the attention of law enforcement officers. And the Captive Wildlife Safety Act contains loopholes for roadside zoos like Greater Wynnewood Exotic Animal Park.

The BCPSA would amend the Captive Wildlife Safety Act to fully ban all private possession of big cats in the United States. A Lady Freethinker petition urging House and Senate leaders to pass the Big Cat Public Safety Act has already garnered over 26,000 signatures. Thank you to those who have already signed. To those who haven’t, please sign and help save tigers, lions and other big cats from a miserable life in captivity.