UPDATE: Lion Cub With Legs Broken for Tourist Selfies Is Going to a Sanctuary 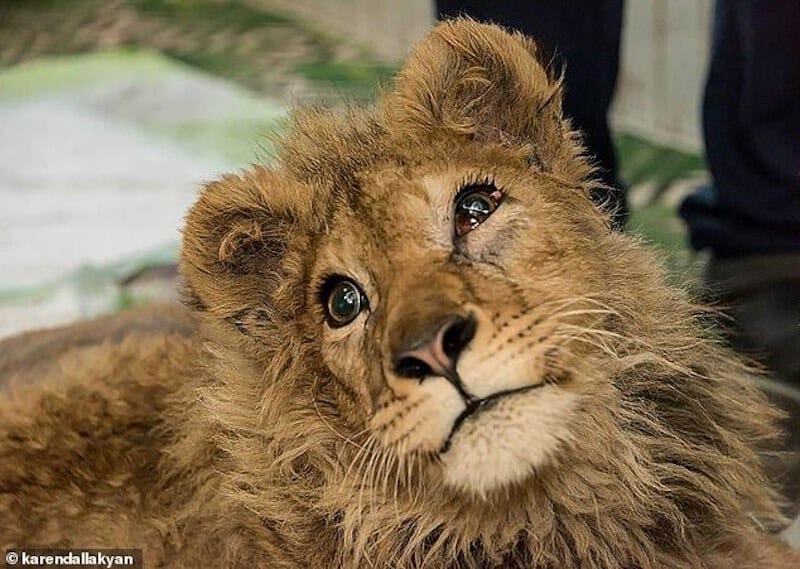 Simba, a lion cub whose back legs were deliberately broken to prevent him from running away while tourists posed next to him for selfies, is finally starting a new life at an animal sanctuary in Africa.

Rescuers in Russia, where the cub was found near death and barely able to move, arranged to fly Simba over 6,500 miles to Tanzania, where he’ll enjoy the comfort and freedom of open land at a big cats rehabilitation center.

“The rehabilitation center we selected employs highly trained, kind, animal-loving doctors who will take care of Simba 24/7,” Yulia Agaeva, who led the operation to rescue the cub, told the Daily Mail. “It is located in a beautiful area where elephants, zebras, caracals, servals, and other fauna live near Mount Kilimanjaro.”

Sadly, Simba will remain deformed for life due to the severe injuries he suffered, but he learned to walk and play again after receiving innovative surgery from animal surgeon Karen Dallakyan, who hailed the cub’s recovery as a “miracle.”

Snatched from his mother at only a week old, Simba had his back legs broken by his handlers, ensuring he would sit still for photos with tourists, even as he grew bigger. He also suffered from beatings, injuring his spine.

When the cub fell severely ill, his captors dumped him in a cold, dirty barn, tethered so he couldn’t escape. The starving lion was discovered with pressure sores and intestinal obstructions, and his muscles were wasting away.

Simba is finally receiving a much-deserved second chance at life, but the fight for justice continues. If you haven’t yet, sign Lady Freethinker’s petition urging Russian Ambassador to the United States Anatoly Antonov to do everything in his power to ensure a thorough investigation into this horrifying act of cruelty.