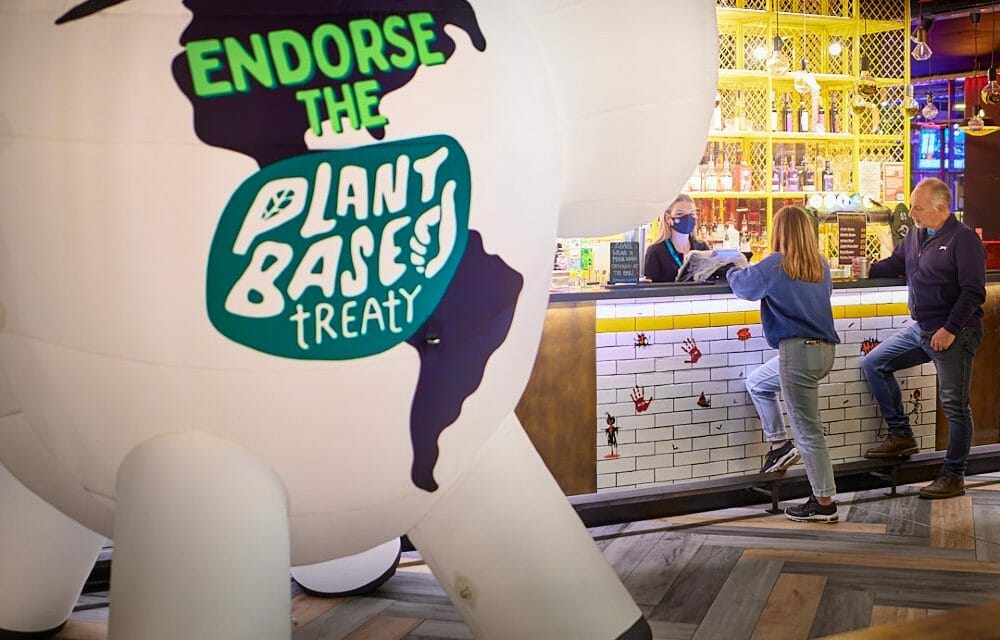 More than 100 interfaith leaders and conservation organizations have urged COP26 officials to endorse veganism as the most sure-fire way to avert severe climate catastrophes for future generations.

In an open letter to COP 26 President Alok Sharma, the signers noted the planet is being threatened as never before, with human extinction a “very real possibility,” and that detrimental effects from massive animal agriculture operations — including methane emissions and deforestation to create grazing lands — were the biggest culprits.

A societal shift toward plant-based eating, by contrast, would help the environment by lowering greenhouse gas emissions and atmospheric carbon dioxide — the latter by allowing for the reforestation of former grazing lands, the letter continued.

“Fortunately, it is much easier to adopt a plant-based diet today because of the abundance of plant-based substitutes for meat and other animal products,” the signatories wrote. “Many have the appearance, texture, and taste so similar to those of the animal products that even long-time meat-eaters can’t tell the difference.”

Endorsing the treaty also would have other benefits — including reducing biodiversity loss, diet-related illnesses, and the massive mistreatment of animals — while continuing “business as usual” would have catastrophic repercussions, according to the letter.

The signers noted the world’s current severe climate events correspond with a temperature increase of 1 degree Celsius, whereas a 2C to 5C degree increase is anticipated by the end of the century, if people don’t change their actions.

More intense and more frequent heat waves, droughts, wildfires, storms, and floods will create millions of fleeing refugees — conditions which could then lead to instability and war, the signatories warned.

Despite the growing evidence of a planet in peril and that Big Ag is a top contributor to climate change, COP26 officials and organizers have come under fire for a reported lack of attention to “the cow in the room,” according to The Guardian.

About 60 percent of meals served at COP26 contained meat and dairy products. Food and farming did not have a dedicated day of discussion — although finance, transportation, and energy did.

The biggest acknowledgments that 20 percent of global emissions come from agriculture and land use were during select pockets of time, when 16 countries chose to endorse the Policy Action Agenda, which will shift agricultural subsidies to reported climate and nature-friendly farming procedures, and U.S. President Joe Biden announced the AIM4C declaration, promising $4 billion for new agricultural practices aimed at reducing emissions.

Campaigners and organizations have said that it’s not enough to treat animal agriculture as a part of a solutions framework, rather than acknowledging its undeniable and disastrous effects.

Marchers took to the streets with that message, towing to the conference four inflatable animals that symbolized problems associated with animal agriculture: a cow for methane emissions, a chicken for COVID-19 and health issues, a fish for microplastics, and a pig for obesity, according to The Guardian.

Rev. Shad Groverland, the executive director of Unity Worldwide Ministries and a signer of the letter, noted that the future of humanity hinges on the choices we’re about to make — and that shifting to plant-based eating should be an obvious one.

“The welfare of the planet, humanity, and all life is inseparably connected to how we treat one another,” he said. “The plant-based treaty is a vital step in shifting our current path of destruction and harm towards one of healing, wholeness, and creating a sustainable world that works for all.”

As of early November, the Plant-Based Treaty had been endorsed by 19,322 individuals, 475 organizations, 291 businesses, and two city and state endorsers. You can learn more, or sign on, here.

The COP26 press team did not immediately respond to Lady Freethinker media inquiries.