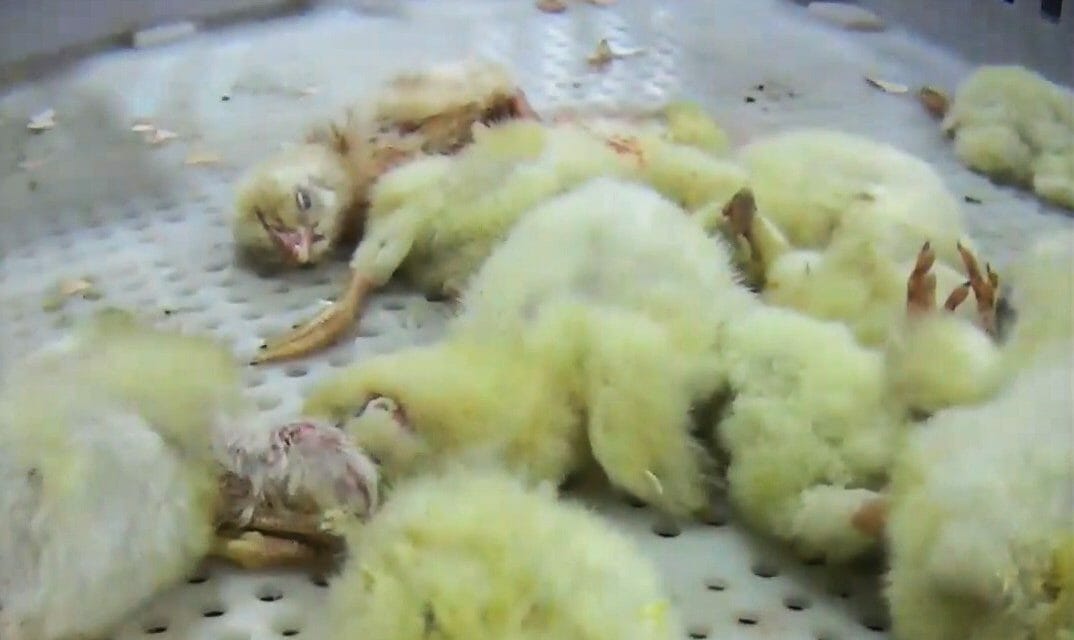 An undercover investigation by Animal Outlook captured footage of chicks being maimed, mutilated, gassed, and ground up alive at a major chicken hatchery in what could amount to criminal animal cruelty, the animal welfare nonprofit alleged.

Case Farms, one of the top 15 U.S. chicken producers, processes up to 200,000 chickens each day, according to Animal Outlook. The company reports on its website that “the welfare of animals under our care is of utmost importance.”

“Case Farms, alongside our contract growers, share a committed responsibility to ensure the well-being and humane handling of all animals in our care,” the company wrote. “We also provide vigorous routine oversight and relentlessly pursue continuous improvements in bird health and environmental conditions.”

The investigator, who is not being named due to the sensitive nature of undercover work, told Lady Freethinker (LFT) the most horrific thing witnessed was “probably a chick who had his eyeball hanging out” and the young age of the animals impacted.

“What really hit home is that these chicks are babies,” the investigator added. “They’re latching onto you, following you around. They want support, but that’s the last thing they’re going to get.”

Case Farms did not respond to media inquiries prior to publication of this story.

Other treatment of the baby animals included chicks crushed after workers dragged heavy plastic trays over them or drove over them with machinery; injured or deformed chicks left in trays with deceased birds for hours on end; and some chicks dumped into a macerator to be ground up alive while still fully conscious, as alleged by Animal Outlook.

Chicks who survive the hatchery are transported to grow-out facilities before being killed as young as six weeks old, according to Animal Outlook.

“It’s clear that Case Farms does not take seriously its legal and ethical duties of care toward the millions of animals it brings into the world each month,” Leahy said. “It is incumbent upon us all as part of a caring society to ensure systemic abusers like this are held accountable.”

Animal Outlook has notified local law enforcement and requested criminal charges if the farm is found to be in violation of North Carolina animal cruelty and neglect laws, according to the nonprofit’s press release.

The investigator said another desired outcome would be for Case Farms to shift production to non-animal products, as some other big companies already have done.

Those eye-opening videos also can inspire others to join the cause; investigative footage was what originally inspired the investigator at Case Farms to make a difference for animals through undercover work.

“Watching the investigation videos made me feel I had to do more to be in the fight,” the investigator told LFT. “I don’t really feel like it takes courage to do this work, because I’m not the one getting abused. I’m just the one with the camera. No matter how much I have to take, what the animals are taking is so much more.”

Those interested in learning more about the Case Farms investigation and Animal Outlook’s other investigative work can find that information here.