5 Quick and Easy, Plant-Based Alternatives for a Delicious Holiday Feast 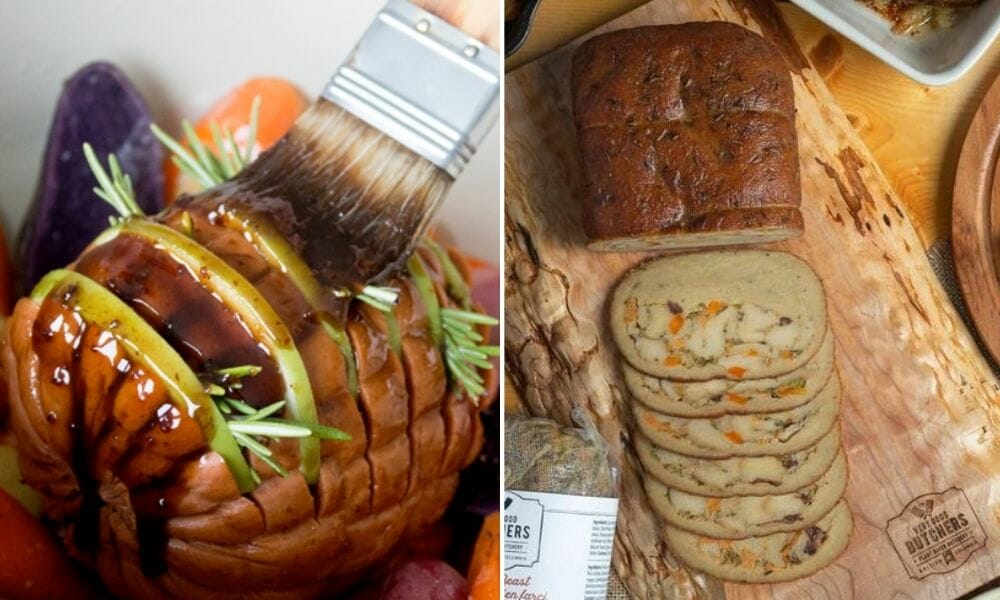 It’s time to put away the Halloween decorations and start preparing for the other holidays! Whether you celebrate Thanksgiving, Hanukkah, Kwanzaa, Christmas, or Festivus (for the Restivus!), a family feast is probably part of your seasonal festivities.

If you’re a vegan, you know how difficult the holidays can be at times. You don’t want to burden your relatives with special dinner requests, but most recipes have animal products in them. Fortunately, quick and easy substitutions for animal-based recipes are becoming much more popular.

Here are five quick and easy, plant-based alternatives for a delicious holiday feast that’ll be sure to impress your friends and family:

The “Stuffed Beast” from Very Good Butchers is one of the best turkey alternatives available in the United States and Canada. It’ll arrive at your door (with environmentally-friendly packaging!) oven-ready. An hour or two before dinner, just pop the Stuffed Beast in the oven with some vegetable broth at the bottom of the dish and check on it every 15 to 20 minutes. Each Stuffed Beast is enough to feed four to six people, according to Very Good Butchers’ website.

If you’re not a fan of turkey alternatives, Tofurky makes an amber-ale-glaze, plant-based ham alternative that does not disappoint. Similar to the Stuffed Beast, the cruelty-free ham roast comes oven-ready. Simply remove the plastic casing, put it into an oven-safe pan, and roast for a little over an hour. Make sure to save some extra glaze for topping the roast after you pull it out of the oven. If you’re looking for a more creative recipe, Tofurky offers suggestions on their website. The “Hasselback Baked Ham” sounds delicious!

This easy-to-make vegan gravy recipe from Nora Cooks does not come pre-made, but it only takes five minutes. Yes, seriously! And it comes out delightful. It’s the perfect topping for stuffing, mashed potatoes, or even the Stuffed Beast. All you have to do is combine six ingredients into a medium-sized pot, bring it to a boil, and stir for a couple of minutes. And that’s it; it’s done and ready for serving.

Pepperidge Farm is not a 100 percent plant-based company, but its herb-seasoned, classic stuffing is free from all animal byproducts. Make sure to replace the butter in the recommended recipe on the back with vegan butter, which is widely available at all major grocery stores. This entire recipe is as simple as it gets and comes together in under 45 minutes.

Being vegan doesn’t mean you have to miss out this holiday season. Don’t sacrifice flavor or simplicity with the cruelty-free recipes mentioned above. And if you’re feeling extra adventurous, try this delicious squash recipe for a cruelty-free feast. Happy Holidays!