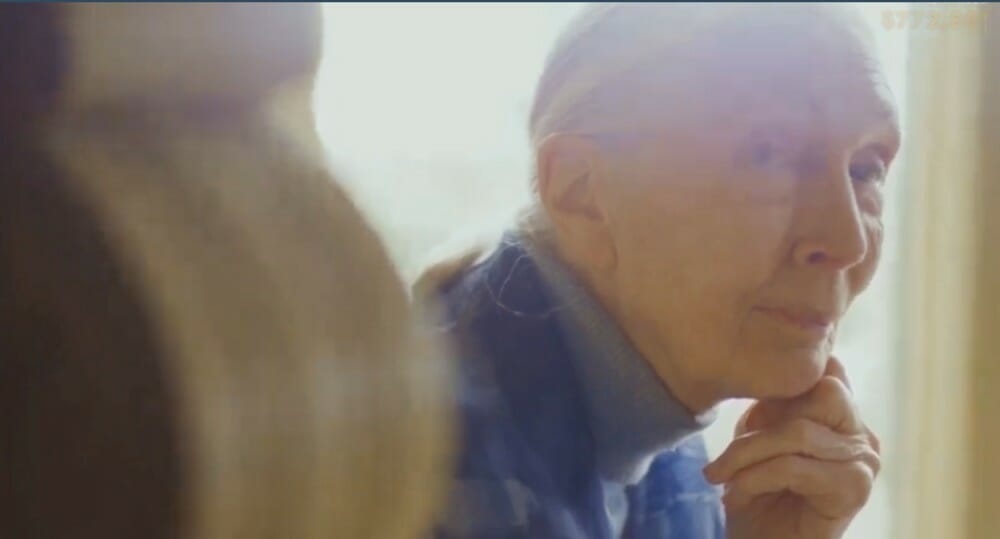 Mercy For Animals — an animal welfare nonprofit dedicated to preventing cruelty to farmed animals and promoting compassionate food choices — hosts the annual event to honor leaders in animal welfare and the plant-based food industry. Goodall fit the criteria for the Hope Award for her vision of a kinder future.

In her video appearance accepting the award, Goodall spoke to the billions of people who realize that collective, small actions can make a big difference in bringing forth a more compassionate world.

She spoke about not wanting to eat meat because of the fear, pain, and death for animals in the industrialized system and how a plant-based diet is better for the environment, people’s health, and, of course, the animals.

“We must remember that every single animal, in a wildlife market or a factory farm, has a personality and feels fear, despair, and pain,” she said.

The gala, virtual this year due to continued repercussions from the COVID-19 pandemic, featured dozens of celebrities, including beloved actress, vegan foodie and Instagram star Tabitha Brown, who hosted.

A number of additional awards noted the incredible contributions of other animal welfare advocates.

“Any time I went somewhere and looked into the eyes of one animal, I’d remember it forever,” Hastings said. “It has been my greatest honor to have this opportunity.”

“We’re in the business of promoting a vegan lifestyle,” said Schinner, whose video appearance included her sitting beside one of her rescued farm animals. “Let us march together, arm in arm, arm in paw, arm in hoof, to create a more compassionate world.”

“It’s important to make a positive difference for people,” Cole said. “I will continue to do the work.”

Mercy For Animals’ President Leah Garcés said she spent long hours contemplating how one can find hope in such difficult times.

She said she’s found it in the farmer willing to transition from factory farming to crop harvesting, as well as the supporters who raised more than $700,000 for the nonprofit by the evening’s end and believe that a more compassionate world is possible.

Sponsors’ donations funded undercover and drone investigations, the opening of a Mercy For Animals office in southeast Asia, policy campaigns to encourage plant-based diets and animal welfare, funds to transition willing factory farmers to hemp or mushroom crops instead, interns, and wellness resources.