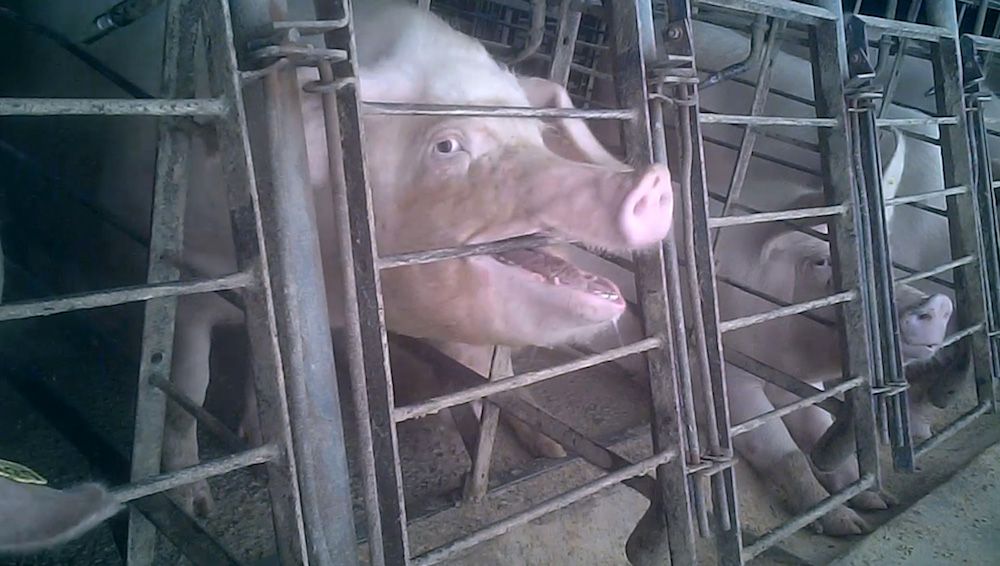 The treatment of mother pigs and piglets within the facility is nothing short of appalling, with workers kicking and punching animals in their heads, viciously smashing piglets onto the ground to kill them, and tearing the testicles from piglets without any form of pain relief.

The video also shows sows confined in cruel “gestation cages” so tiny that they can’t turn around or comfortably lie down. The pigs are held in these cages for most of their lives.

MFA is asking JBS to remove factory farms such as this from their supply chains and calling on the mega-meat company to ban gestation crates from all of their suppliers.

“Locked inside these tiny torture chambers, pregnant pigs languish in their own misery as the years slowly pass by,” MFA Director of Communications Kenny Torrella told Lady Freethinker. “These curious animals lose their minds from boredom and stress. It’s time for JBS to end the extreme confinement of farmed animals, and put an end to mutilations without pain relief, throughout its entire global supply chain.”

JBS is a worldwide conglomerate with slaughterhouses in more than 20 countries. They are responsible for the death of around 28 million pigs every year.

Although the company has said they will phase out gestation crates in their homeland of Brazil, they have made no such commitment in the US.

The findings from this undercover investigation are especially timely, with Prop 12 coming up for public vote in California this November. Although gestation crates are banned in the state, meat can still be shipped to California from farms using these inhumane cages. MFA is urging Californian voters to support Proposition 12 – also known as the Prevention of Cruelty to Farmed Animals Act – to help ensure that all meat and eggs sold in California meet minimal animal welfare standards.

“Californians should vote yes this November on Prop 12 to abolish cages for farmed animals. This historic measure will be the strongest farmed animal protection law in the nation, and reduce the suffering of millions of animals each year,” said Torrella.

With regards to the shocking abuses at Tosh Farms, MFA is filing a complaint with the Simpson County District Attorney’s Office.

“If JBS executives abused even one dog or cat the way their suppliers abuse millions of pigs, they would be jailed for cruelty to animals,” said Matt Rice, President of MFA. “As the largest meat company in the world, JBS has the power and responsibility to end this torture.”