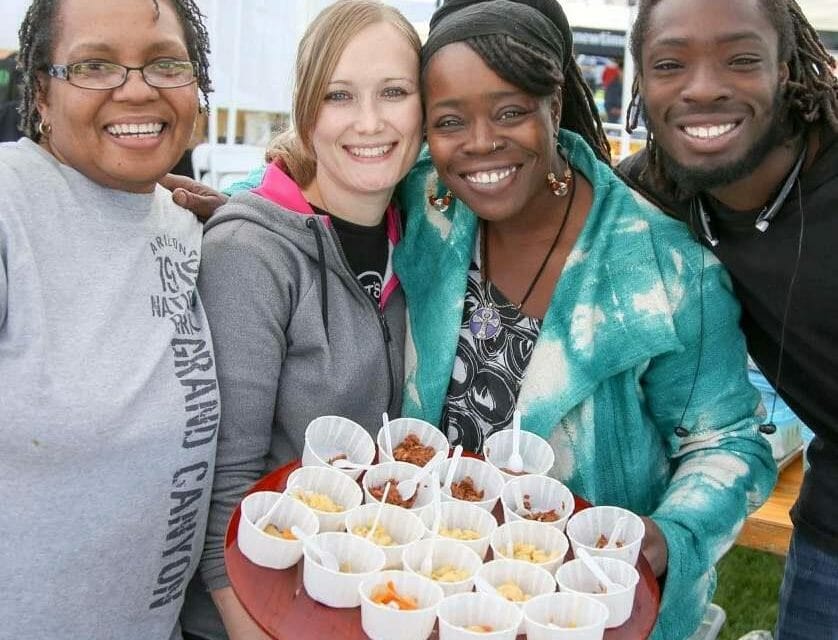 The foundation for Chef Nadira Jenkins-El’s stunning success with veganizing “Soul Food” started with her childhood.

Early memories of cooking included “Soul Food Sundays” — highly anticipated events where community members gathered for fellowship and laughter that kept neighborhood grandmas in the kitchen for hours, whipping up the traditionally meat- and dairy-heavy Southern favorites like ribs and mac n’ cheese.

But her memories also included her father carting home boxes of fresh oranges and organic vegetables, as well as now-well-known vegan staples with then-exotic-sounding names like tofu, tempeh, and textured vegetable protein (TVP). Her parents were Moorish American, a part of Islam, and her family did not eat pork, red meat, or shellfish. So plant-based options predominated in her family’s household.

Jenkins-El carried both traditions — healthy, plant-based eating and food as celebration, friendship, and fellowship — into her adulthood.

But it wasn’t until doctors diagnosed her with hereditary Type 2 diabetes and hypertension — health afflictions that impact Black people at much higher rates nationally —  that she became deadly serious about shifting her own eating habits.

“I refused to take pills for the rest of my life,” she said. “I started researching how to heal myself, and I came to the conclusion that meat and dairy had to go.” 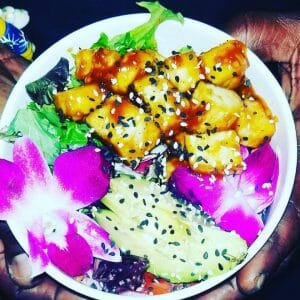 Jenkins-El said that within 30 days of being vegan her blood sugar and blood pressure levels stabilized. She no longer needed the daily prescription medications.

“What I had researched worked for my body, and I felt amazing,” she said. “That 30 days changed my life.”

As mother with school-aged children, working a full-time job and a part-time job on the side, while also attending school herself, Jenkins-El needed options that were quick, affordable, and accessible. She also needed to find substitutes for the “soul food” her children had grown to love and demand.

Her journey to becoming a vegan chef  — backdropped by other careers in nursing, education, and entrepreneurship — took her to St. Croix in the Caribbean, where she learned about plant-based options from a large vegan community, and to Tempe, Ariz., where she co-opened an all-vegan bakery and cafe. She became an executive chef after studying culinary management at the Art Institute in Washington D.C. and also is a holistic nutritionist.

The result of her research into how diet contributes to health conditions and her “play-time” in the kitchen is the “Vegan Soul Food Cookbook: Plant-based, No-Fuss Southern Favorites” — a  compendium of more than 100 plant-based recipes that range from oyster mushroom fried “chicken” and barbecue “riblets” to non-dairy mac ‘n cheese and pecan pie bars.

“For anyone new to the lifestyle or trying to get healthier, I would tell them to stay the course, to not overthink it, and to be open to what the Universe could bring you in this transition,” she told Lady Freethinker.

The following Q&A combines an interview with Jenkins-El and excerpts from her sizzling vegan cookbook.

A Q&A With Chef Nadira Jenkins-El

What is soul food historically, and what does “soul food” mean to you?

Historically, “soul food” came from enslaved people. The slave masters would only allow the slaves to have table scraps, so enslaved people had to be very creative with food and feeding their families. The term “soul food” itself wasn’t created until the 1960s, during the Civil Rights movement.

Soul food is often heavily fried, highly processed, and laden with sugar, all of which have been linked to a rise in heart disease, hypertension, and diabetes within the African American community. I realized food doesn’t have to be loaded with meat or dairy, deep-fried, or sugar-coated to be delicious.

(She adds in the introduction to Vegan Soul) I use two definitions of soul food to guide my work and my own eating. The first is the acronym SOUL: Seasonal, Organic, Unprocessed, Local. Eating foods that are seasonally grown, organic when possible, unprocessed or whole, and grown locally will go a long way toward helping you become the healthiest version of yourself. The standard American diet (SAD) tends to be high in processed convenience foods and is often high in unhealthy fats, sugars, and chemical additives. Eating the SAD way has proven to be detrimental to our health, our planet, and the lives of millions of innocent animals. So I say, let’s eat the SOUL way.

My second definition of soul food… soul food has to be made with the love and energy of the soul poured into each dish. Soul food is pure love on a plate! 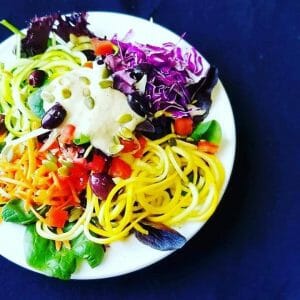 How did your journey to becoming a successful vegan chef evolve?

The first memory I actually have was making scrambled eggs for my grandpa, who just recently passed. I must have been four or five years old. I remember serving him and the smile on his face, and how much he appreciated the food. So many of my memories are so joyous surrounding food.

After I got diagnosed with hypertension and diabetes, which the doctors told me was hereditary, I learned about the link between fried foods and high-meat diets and illness. My transition came from dealing with these health issues myself. After my 30 days without meat or dairy, I regained my natural energy, and I realized I couldn’t go back.

But I didn’t know what I could eat. I had to get out of my head. I said, “Nadira, you’re a chef. You love food.” And that’s where my upbringing came in. My dad had used herbs to heal us, taken us to a lot of co-ops and local farms for fresh foods. It was really tapping back into my roots and what I knew already about eating meatless. I realized how easy it was, once I got out of my head, to transition to these foods I had grown up with and not be sick.

After starting a vegan pastry business called Global Fusion, I got to go to the U.S. Virgin Islands. I learned about soursop, jackfruit, other fruits and veggies and how to eat the food off the land and purchase from local farmers. I was able to come back from that and transform Global Fusion to include food, and then we were able to purchase a restaurant (The Cutting Board). 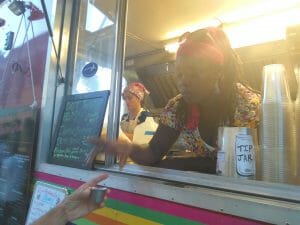 Have you come across resistance to plant-based “soul food?” Or has the response been positive?

The challenges, I think, come down to fear and overthinking. Many people don’t know anything about being vegan or plant-based. We have these blocks that we put up in our minds when something isn’t what we are familiar with. People also worry that they won’t get enough protein or think that being vegan is very expensive.  But I remember spending $60 a week on meat, whereas now I only spend $20 to $30 and I’m able to eat all week. You just have to learn how to shop differently and tap into local options, like farmers markets.

I feel like half of my time as a restaurant owner is actually talking to people about easy ways to transition, to treat plant-based eating like more of an adventure. I love to show people, “This is this veggie, this is how you can cook it.”

My time working with youth actually helped show me that different mindset. They were used to lunch meat [and] fried chicken wings. I would always pack my own lunch, and they’d come over and ask me, “What is that weird stuff you are eating?”  It got to where they were coming into my office every day, asking, “What’d you bring for lunch?,” and I started cooking for them. Then they asked me to create a healthy cooking class, and at the end of that they wanted to start a business. And we did, and it lasted for about five years, and then I went to culinary school.

When I started, I didn’t at first tell customers the food was vegan. I let them try it first. Then I told them. It’s grown from there, and the public is receiving it very well. 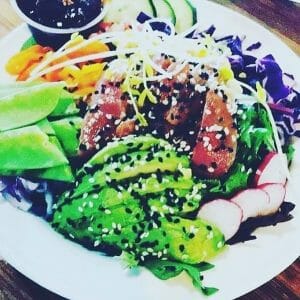 What’s next for you?

We have had to close the Cutting Board due to COVID-19. But I’ve opened up another restaurant in Phoenix, called Cosmic Vegan. We just hit six months. The mission is the same: to provide faith and opportunities for local entrepreneurs. We have a storefront and also products from about 25 local Black and brown businesses. We are growing together, because we are stronger together. So many businesses are struggling right now, so this is how we are going to survive without giving up our dreams. We are going to follow the laws, but we also have to live.