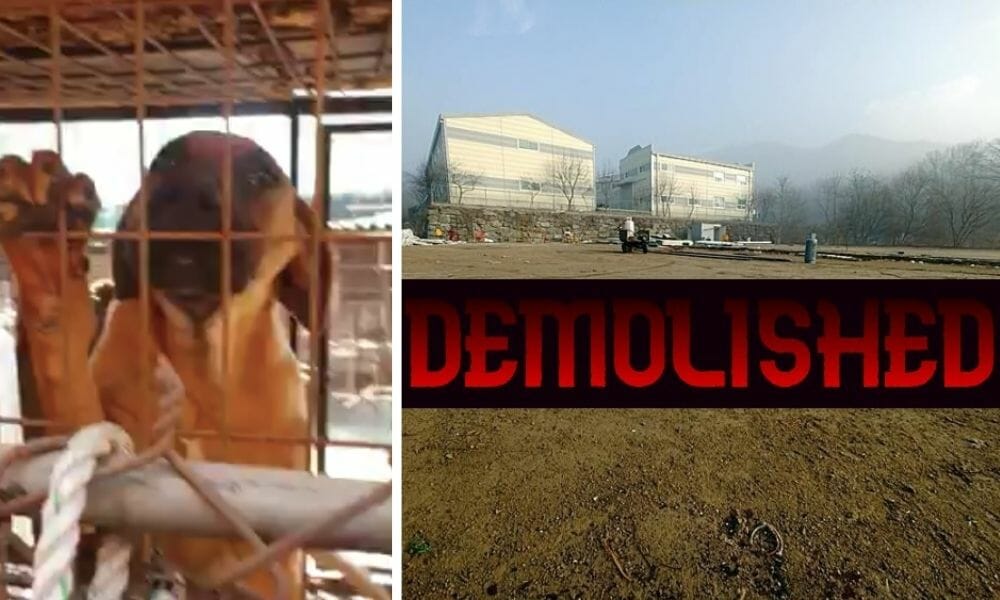 In a victory for South Korean dogs, a cruel dog meat auction house in the city of Paju has been shut down and demolished.

Thank you to the more than 42,000 people who signed the petition from Lady Freethinker and our partners Save Korean Dogs to shut this auction of horrors down!

Workers razed the auction house, in which hundreds of dogs had been kept in tiny, filthy cages and then sold to bidders for slaughter, following an official action from the city’s mayor Choi Jong-hwan, ongoing and chronic citizen complaints, and a relentless, months-long protests by SKD.

“We were here from March to June,” said SKD Founder Nami Kim. “I thank Mayor Choi and the staff and all our Paju team members.”

“The auction house’s shuttering is a life-saving move forward for dogs who otherwise would have suffered, and adds further proof that attitudes toward dog meat consumption in the country have changed,” said Lady Freethinker Founder Nina Jackel.

After that auction house shuttered, Kim observed the same trucks carrying cages of dogs to the new location in Paju. Lady Freethinker quickly issued a new petition urging officials to investigate the situation, which Kim hand-delivered to the mayor’s office in October.

Meanwhile, the mayor’s office had received complaints related to chronic animal issues at the Paju auction house. Mayor Choi ordered the issues to be considered a high priority, and the city filed a complaint alleging the auction house had violated the Livestock Act, the Agricultural Land Act, the Building Act, and the Land Law for opening and operating an unregistered “livestock market,” according to Financial News.

The auction house’s owner challenged the administrative actions, resulting in litigation that stretched on for months, during which city officials with numerous departments attempted to persuade the auction owner to shut down the facility.

Then, on Dec. 17, in a move celebrated by the mayor, the owner voluntarily agreed to shut down, and workers demolished the illegal structures built for the auction house.

“The operation of an illegal dog auction house is an act that seriously infringes on the public interest,” Mayor Choi Jong-Hwan told Financial News. “I am fortunate to close it voluntarily without mobilizing physical force.”

Lady Freethinker and Save Korean dogs have been campaigning together to end the horrific dog meat trade in South Korea for years. In 2018, LFT sponsored a bus ad campaign and then followed up with advertisements on 20 taxis, declaring that dogs are “not food, but family.”

Attitudes are changing. A 2020 poll showed that 84 percent of South Koreans surveyed said they won’t eat dog meat, and about 60 percent supported a legislative ban on the trade.

We thank our partners at Save Korean Dogs for their dedicated activism on behalf of South Korea’s dogs and to the thousands who have signed our petitions urging an end to this brutal trade!