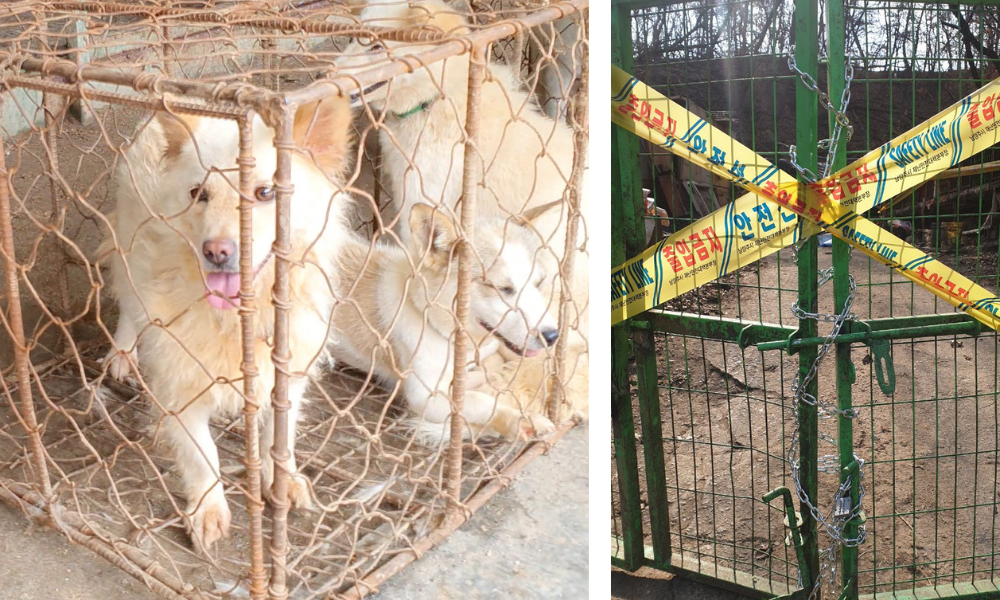 The Nakwon Auction House is now closed, and all of the dogs have been removed from its premises, officials with the city of Namyangju said via press release.

Mayor Cho Kwang-han also emphasized that the city will immediately crack down on any additional illegal activities, should they arise.

LFT’s undercover video, released in October 2020, captured more than 200 terrified dogs in cramped wire cages. The footage sparked public outrage, a dedicated call to demolish the auction house, and evidence the local government needed to shut down the illegal sales.

“We were lucky this time, as we had pictures as evidence. Without them, we probably couldn’t even have started our investigation,” an official with the city’s animal welfare team told an LFT correspondent. “You cannot just walk into this kind of property without evidence.”

The official said that the Nakwon Auction House’s owner was fined the equivalent of $10,000 USD for building the facility without an authorized permit and that the government could leverage additional fines should the owner refuse to cease operations. Sales from dogs probably won’t cover the costs of those fines, making it unlikely that the owner will continue, the official added.

Cases filed with police about the auction house have been transferred to the prosecutor’s office, the official confirmed.

LFT Founder Nina Jackel said the closure of the gruesome dog auction house is a huge win for the thousands of dogs held captive in filthy, metal cages and sold off for brutal slaughter.

“This is an important victory for all of the dogs suffering in the cruel meat trade,” Nina said. “However, our work is far from over.  Dogs continue to die every day for profit in this hidden, abusive industry. We will not stop until every dog is safe from slaughter.”

We thank the more than 46,000 supporters who signed LFT’s petition demanding the auction house’s shuttering and accountability for S. Korean dogs!

Help end dog meat for good by signing the petition below.