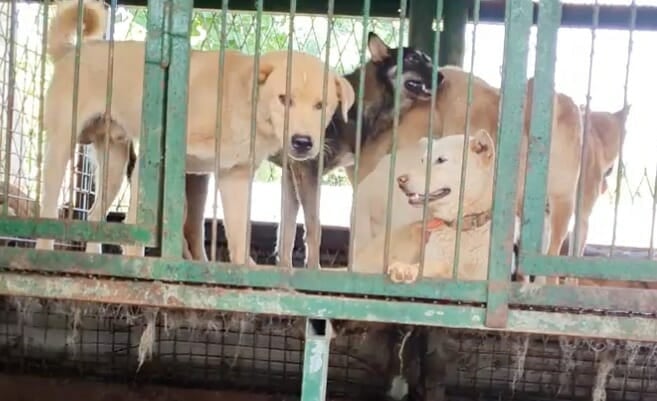 UPDATE (12/23/2021): The Paju auction house has been shuttered and demolished. You can read the full story here! Thank you to the more than 42,000 people who signed our petition! —Lady Freethinker Staff

Locked inside cramped, dirty cages, helpless dogs cower in fear while auctioneers sell their lives to the highest bidder. Once they’re sold, the dogs are prodded with metal rods, ripped out of their cages, and shipped off to slaughter.

These are the horrors of dog meat auction houses throughout South Korea.

But dogs are still suffering at a similar, cruel auction inside the city of Paju. Kim has even seen the same trucks spotted in Namyangju carrying cages to this operation instead. We must speak out to urge officials in Paju to shut this horrific dog meat auction down at once!

Dogs are family, not food. They deserve loving guardians and devoted care, not lives locked in cages and deaths by butcher knives. This is unacceptable, and we will not rest until every dog meat auction house in S. Korea is permanently closed.