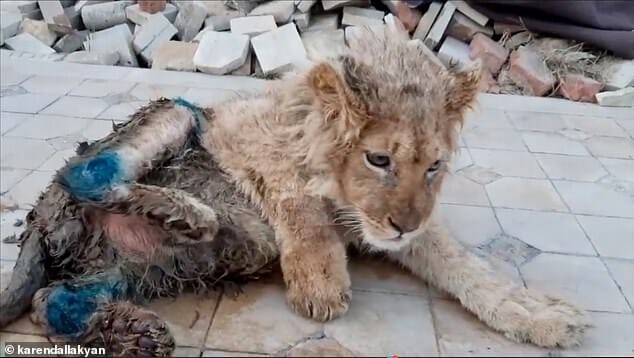 UPDATE (8/12/20): After innovative surgery, Simba learned to walk again, but will forever remain deformed. He has been arranged to fly over 6,500 miles to a big cats rehabilitation center in Tanzania, Africa, where he will live near elephants, zebras, and other wild animals. His abusers remain unidentified.

Suffering “an ocean of pain from humans,” an emaciated lion cub named Simba had his back legs brutally broken to prevent him from escaping his handlers, making it easier for tourists in Russia to take photographs with him.

Snatched by criminals at only a few weeks ago, the defenseless cub suffered serious spinal injuries after being viciously beaten and tortured. His muscles wasted away from starvation and intestinal obstructions and painful pressure sores tormented him every day. After losing his “entertainment value,” Simba was tethered inside a freezing, filthy barn and left to starve.

When rescuers discovered the helpless creature, he was hardly able to move. His back legs were caked in dirt, disfigured and bent at distorted angles.

Sign this petition urging the Ambassador of Russia to the United States Anatoly Antonov to ensure this appalling act of animal cruelty is fully investigated and the perpetrator(s) are charged and barred from ever going near an animal again.