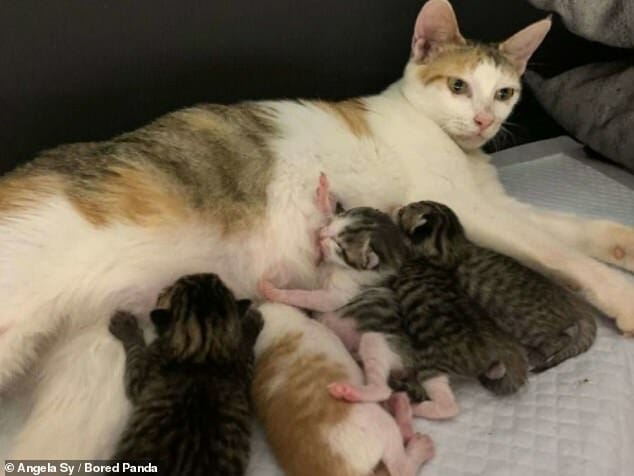 Compassionate employees at a Shanghai company have a few adorable new coworkers.

A stray cat gave birth to eight kittens in a meeting room at the design consultancy Holmes & Marchant, after staff saw her hanging around outside the office building and took her in, reported MSN.

The thin and clearly pregnant cat was meowing at passersby and rubbing her face on them, according to employee Angela Sy, who documented the experience on Bored Panda.

“It’s like she was asking for help,” one coworker said, according to Sy, “for her babies and herself.”

The cat, now named Boba, got lucky, as the office “had a bunch of cat ladies ready to give the pregnant mama some TLC to get her ready for her delivery date,” Sy wrote.

They set up Boba in an extra meeting room with a litter box, food and bedding, giving her a space safe to live. A few days later, employees arrived to find Boba had given birth to eight tiny kittens — four boys and four girls.

As the weeks went by, the office workers saw the kittens grow up as Boba cared for them. They first opened their eyes, started to eat solid food, and learned to use the litter box. Staff moved the feline family to a bigger room so they could run around and play.

Staff members plan to get Boba spayed and find homes for the kittens, according to Sy.

But until they do, the kittens’ room is the employees’ new favorite place to work!

For more heartwarming stories of kitten rescues, check out how a mother cat and her five kittens were saved after getting stuck in a tree, or how a dog heroically found seven abandoned kittens.