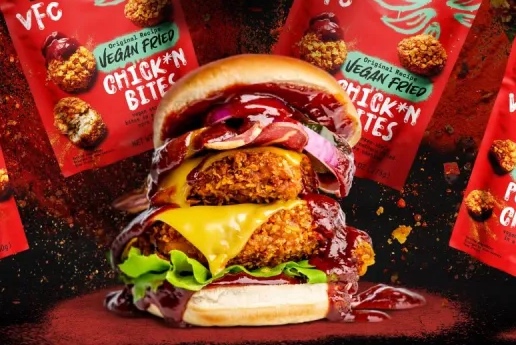 Started in the United Kingdom in 2020, VFC now also has several products – including VFC popcorn chick*n, bites for dunking and dipping, and filets – available for purchase online for U.S. customers.

The mock meats use a protein-packed wheat base inside a southern fried cornflake coating to deliver delicious results to vegans and omnivores alike.

The results are crunchy, soft, and savory plant-based foods that offer amazing flavor, texture, and well-balanced nutrition, all while being kinder to animals, the planet, and people, too.

Founders Matthew Glover, the co-founder of the Veganuary movement, and Adam Lyons, a successful chef and restaurateur, said their passion for innovation, sustainability, activism and taste led them to launch the company, in an act they describe as “a rebellion.”

“Ours is an act of positive rebellion against a system that has brought us climate change, environmental destruction, factory farming, and slaughterhouses,” VFC notes on its website. “We intend VFC to be part of the movement that puts an end to factory farming for good.”

There are many ways to dismantle unjust and destructive systems, VFC continues. Their chosen way to be part of the solution is through great food.

“We’re absolutely serious about protecting our planet and its inhabitants,” the company’s website says. “Animal agriculture is driving some of the world’s most pressing environmental and public health crises. But there is a better and tastier way.”

The company estimates that they save a chicken’s life for every 3.8 pounds of food they sell – the same weight considered to  be “edible” of each chicken killed. Using those calculations, VFC estimates they’ve saved 98,849 chickens to date.

Cultivating wheat also produces a quarter of the emissions of raising chickens, while growing plants also undercuts other environmental disasters caused by animal agriculture – including forests razed to grow food for farmed animals and waters polluted from manure and runoff, according to VFC’s website.

The foods are great by themselves but also can be crafted into other culinary adventures – including chick*n tacos, popcorn glazed chick*n, po boys, Chick*n Parmigiana, or loaded chick*n nachos, with recipes available on VFC’s website. 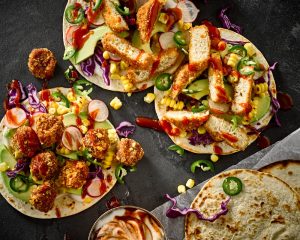 The suggested serving sizes contain between 12 and 17 grams of protein, and while there is some fat – it is fried food, after all, although the founders note “We fried this, instead of the planet”– the amount of saturated fat per serving is low to none, according to the products’ labels.

The company also has committed to using minimal amounts of recyclable plastics, vegan inks and adhesives, and shipping cartons made with at least 90 percent of recycled materials to further lower their environmental impact, according to VFC’s website.

The U.S. launch is timely and relevant, with recent news reporting more than 16 million birds, including turkeys and chickens, have recently been slaughtered by poultry producers to prevent the spread of a dangerous and often deadly avian bird flu that can jump from infected birds to people, in rare cases.

VFC products are now available at one of America’s leading vegetarian online grocery stores, including shopvejii.com, with a pack of all three products retailing for about $20 and individual packs selling for around $7. Customers can use discount code VFC20 for 20% off.

To find out more about VFC’s mission head to www.vfcfoods.com or find them on Instagram @vfc.food. 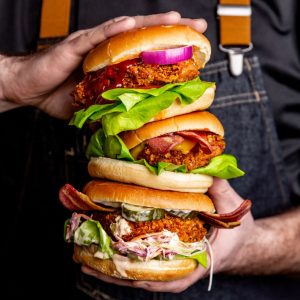