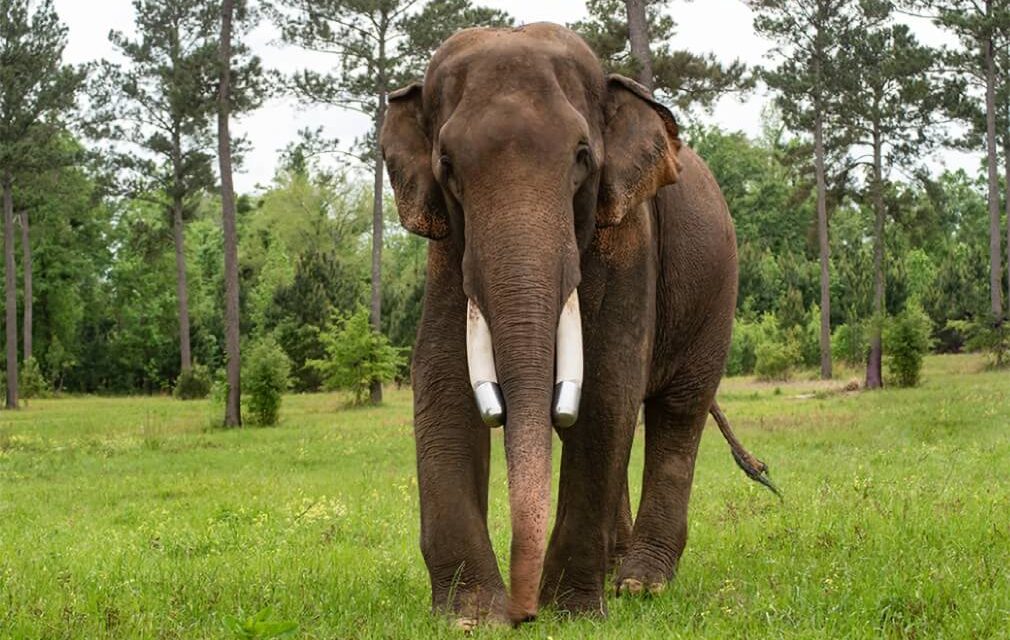 The 12,000 pound Asian elephant arrived at the sanctuary in Attapulgus, Georgia, at age 34, after nearly three decades of being forced to perform in circuses and spending most of his time when not touring on a one-acre plot in Missouri.

He now has free range of the Refuge’s 850 acres, including lush vegetation and streams and a custom-built elephant house – although his caretakers say he prefers to spend the majority of his nights sleeping outside under the stars.

“The past year has been filled with firsts for Bo, an Asian elephant of 35, all of which he navigated with grace and wisdom,” ERNA said in a press release.

Bo originally stayed in a 7-acre habitat while he acclimated to his new environment. But after just two weeks, ERNA staff knew he was ready to explore beyond that space.

“His immediate reaction was to reach out with gentle caresses, apparently quite pleased with her arrival,” ERNA said in a newsletter. “Tarra returned the gesture. The two intertwined trunks over a fence line and communicated vocally.” 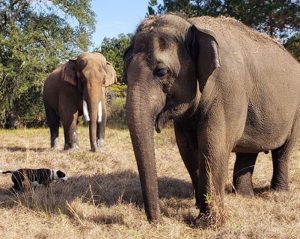 ERNA said both elephants settled into the sanctuary quickly and “their relaxed body language and calm behavior continues to let us know they are comfortable and at peace.”

The elephants also get along with ERNA’s newest rescue – a pup named Samie.

“Bo walks miles every day, exploring, grazing, dusting, swimming in the lake and socializing with his new family,” ERNA said. “We are thrilled Bo is thriving in his retirement and that Tarra has realized his friendship is priceless.”

Bo’s profile notes he arrived at ERNA with steel caps on his tusks that are not essential in a natural sanctuary setting, and that once the caps fall off they will not be replaced.

ERNA is a project of Elephant Aid International, founded by Carol Buckley in 2010.

To maximize the rehabilitation of the animals, the sanctuary is not open to the general public, although ERNA says people can view the elephants and their antics via video live streamed from habitat cameras. The EleCam feature currently is on hiatus, however, with the organization citing a relocation of Bo and Tarra to an expanded habitat.

While these elephants are living peaceful lives, many in the United States and around the world are not.

If you haven’t yet, sign Lady Freethinker’s petition to end the use of chains, whips, and bullhooks at Shrine Circuses around the world. And take a stand against circus cruelty by choosing only animal-free shows for you and your family.