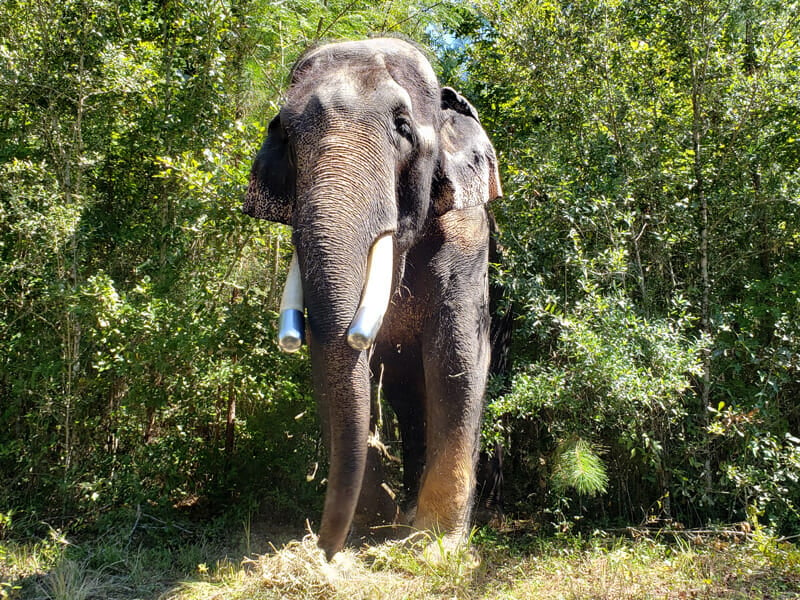 Bo, with metal caps on his tusks to protect them from cracking. Photo Credit: Elephant Refuge North America

After nearly three decades of forced servitude in a traveling circus, a 34-year-old Asian elephant named Bo finally arrived at his new forever home at an elephant sanctuary.

He is now free to go where he wants on a 7-acre habitat in the sanctuary grounds, eat when he wishes, and idle or play as much as he likes.

Located in southwestern Georgia, ERNA has just the right climate to enable Bo and up to nine more captive-born elephants live outside year-round and regain their “elephantness.” As a captive elephant, Bo spent most of his life on a one-acre plot in Missouri, when not touring with the circus.

Although his movements will initially be limited to the 7-acre habitat for a few months of acclimation, he then will be allowed to roam a 100-acre area of pastures, woods, and ponds, according to EAI Founder Carol Buckley.

“Retiring Bo, a performing elephant in the prime of his life, to a refuge sets a new precedent for how performing elephants can live out their lives,” Buckley said. “For the first time in his life, he can do as he pleases. He has to think on his own, ‘What do I want to do?’ That’s a big change.”

In the weeks leading up to Bo’s arrival, Buckley worked to reinforce the refuge’s exterior fencing, which was originally built to accommodate older female elephants. As a male elephant in the prime of his life, Bo is considerably larger and stronger.

Mercifully, Bo has escaped the suffering of circus life, but many other elephants are not as lucky.

If you haven’t yet, sign Lady Freethinker’s petition to end the use of chains, whips, and bullhooks at Shrine Circuses around the world. And take a stand against circus cruelty by choosing only animal-free shows for you and your family.