Animal Welfare in Zoos: The 10 Worst Zoos for Elephants 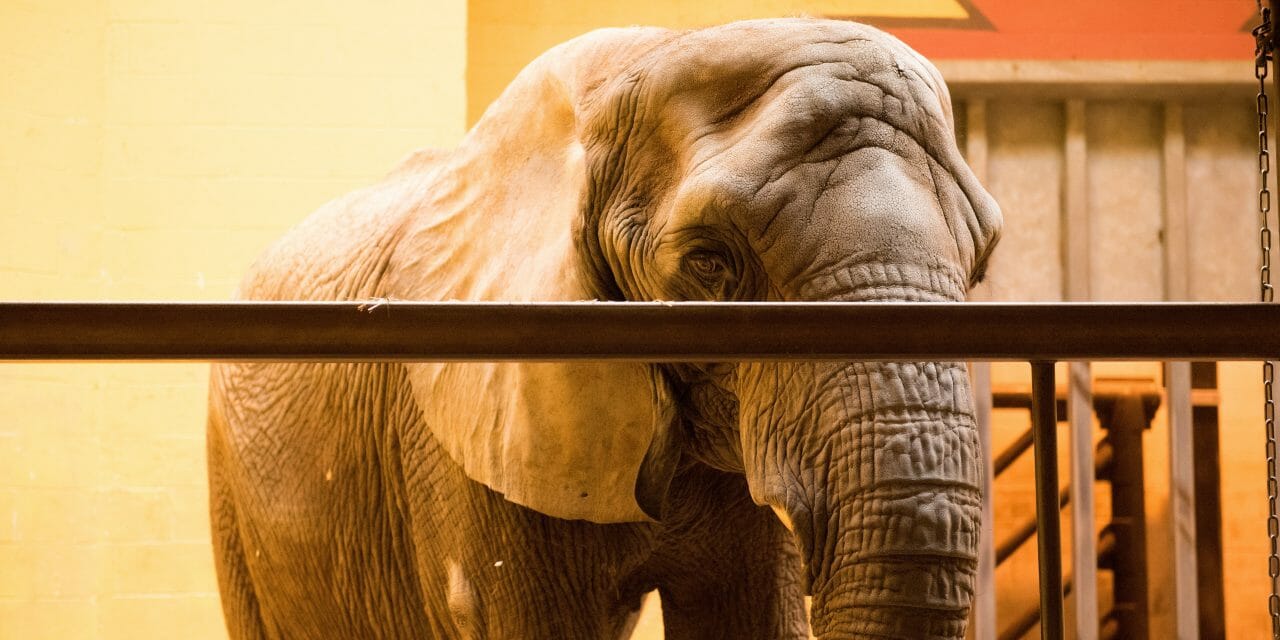 In Defense of Animals recently released its annual “10 Worst Zoos for Elephants” list, which raises awareness about the often-fatal harms committed against elephants in North American zoos — and general zoo animal welfare.

These are the worst zoos in America for elephants. This list will also answer the question: are elephants happy in zoos?

“The zoos featured on this list demonstrate how public display facilities can cause elephant suffering, regardless of space, ‘enrichment,’ or financial investment,” explained Marilyn Kroplick M.D., the organization’s president.

In compiling the list, investigators observe elephants engaging in behaviors that are indicative of chronic stress and suffering, suggesting that artificial environments inhibit pachyderms from satisfying their social, physical, and psychological needs.

Here’s the complete list that shows the lack of animal welfare in zoos for elephants:

One elephant, Mali, gave birth to her calf, Ajay, at the Rosamond Gifford Zoo in January 2019. Unfortunately, based on the zoo’s past actions, it seems likely that Mali and Ajay will be separated. In the early 2000s, Mali gave birth to another calf named Chuck, and the zoo broke them up three years later.

Elephants are extremely social and empathetic creatures, and a bond between a mother and baby is strong. Removing a mother’s child can lead to devastating social and health issues for both parties and shows that the welfare of animals in zoos is not taken seriously.

Another of the worst American zoos for elephants, San Diego Zoo Global operates and is affiliated with various zoos, including the Reid Park Zoo in Tucson, Ariz., which has been featured on this list in the past. It provides further evidence that when discussing if elephants are happy in zoos, the answer is no.

Last year, the company separated four males who had formed a strong “brotherhood” bond and punished an elephant for never fathering offspring by relocating him.

While male elephants in the wild typically leave their herds during their teenage years, this is a gradual process, not a sudden breaking-up of families like at San Diego Zoo Global. This disregard for zoo animal welfare is all too common

Christie, an African elephant cruelly ripped away from her mother in the wild at a young age, has a 10-year-old calf, Zuri. Since their companion’s death in 2015, the duo has remained unaccompanied in their exhibit at Utah’s Hogle Zoo.

In this case, the Association of Zoos and Aquariums (AZA) is failing to enforce its required minimum of three compatible elephants per enclosure, making this zoo one of the worst in the United States for elephants.

For years, the Edmonton Valley Zoo has refused to re-home Lucy, an ailing Asian elephant living in solitary confinement, to a sanctuary. As more evidence of the quality of animal welfare in zoos, Lucy endures harsh Canadian winters, which stoop to a bone-chilling range of between 14 to -31 degrees Fahrenheit.

Can elephants really be happy in zoos with these conditions? Below-freezing temperatures and the zoo’s frequent use of bullhooks to control Lucy only add to her ever-diminishing health.

At the Natural Bridge Zoo, Asha, an African elephant, recently received a new name, Beautiful. Her reality at the zoo, however, stands in stark contrast to her new moniker.

Places like this demonstrate a disregard for zoo animal welfare. For nearly 20 years, the Natural Bridge Zoo has kept her in solitary confinement. She spends summers forced to provide rides to thousands of people at the mercy of a bullhook. During the winter, she’s relegated to the confines of a cramped, bare enclosure. Natural Bridge Zoo has long been regarded as one of the worst zoos in America.

The absence of basic welfare for animals in zoos can also be seen in the story of Mikki, a 35-year-old African elephant who recently gave birth to a calf, Fitz, after seven years of failed artificial insemination attempts. Her other calf, Scotty, died in 2010 from colic at three years old.

In 2016, Mikki was subjected to six traumatic artificial insemination procedures, which often entail chaining a female elephant’s legs down and forcibly invading her 13-foot-long reproductive tract against her will.

Fitz and Mikki, who are both African elephants, share an enclosure with an Asian elephant, Punch. This unnatural social arrangement is unhealthy for everyone involved, especially Fitz, who is a baby and should be raised according to a vital, species-appropriate kinship structure.

This is the Oregon Zoo’s tenth appearance on the “Worst Zoos for Elephants” list, evidence of a complete lack of animal welfare improvement in zoos.

Freedom of Information Act (FOIA) documents show that a 26-year-old Asian elephant named Chendra was pregnant during the summer, but that she was later diagnosed with tuberculosis (TB) and miscarried. The zoo forced Chendra to breed despite having been exposed to other elephants with TB in the past, and her dangerous pregnancy probably resulted from a desire for increased revenues and zoo attendance. This makes Oregon Zoo one of the worst American zoos.

In 2006, the Bronx Zoo promised to end its elephant program, after concerns about zoo animal welfare and the elephants’ overall happiness in zoos. But 12 years later, it continues to house elephants. A 48-year-old Asian elephant named Maxine recently passed away due to a progressive illness.

The Bronx Zoo is a veteran on the “Worst Zoos for Elephants” list. Last year, it ranked number one due to its mistreatment of Happy, an elephant who suffered in isolation with Maxine for 13 years.

Much like with Utah’s Hogle Zoo, the AZA is failing to enforce its three-elephant minimum per enclosure policy at the Bronx Zoo.

There is also cause for concern over zoo animal welfare when you look at the four elephants who have died at Zoo Miami since 2012, earning the establishment one of the worst track records in North America for elephant deaths. Additionally, the zoo struggles with aggressive behaviors between its elephant residents, which tend to lead to life-threatening injuries, making this American zoo one of the worst for elephants.

An African elephant named Cita passed away in February 2019 following an encounter with another elephant, Peggy. Cita suffered for at least 14 hours before she finally succumbed to her injuries. It was the fourth time Peggy had attacked Cita, according to records obtained by In Defense of Animals, making this an easily preventable death. With all this horror, it’s clear that elephants are not happy in zoos.

When discussing a lack of animal welfare in zoos, particularly for elephants, the Pittsburgh Zoo tops the list, courtesy of its “unbroken pattern of negligence” toward its pachyderm residents. The zoo’s sheltering is inadequate, and investigations carried out by In Defense of Animals show that the zoo separated three closely-bonded elephants who had spent around 25 years together.

As recently as December of 2019, investigators witnessed distressed elephants pacing around their small enclosure for hours on end. These elephants are accompanied by dogs, despite a previous USDA citation regarding the propensity for canines to act aggressively toward elephants and cause them “undue stress.” Again, this shows the shortcomings of zoo animal welfare.

Like elephants at other cold-weather zoos, those at the Pittsburgh Zoo endure winters on concrete floors, which are known to cause painful leg and foot disease. This happens at some of the other worst zoos in America. Last year, the zoo separated an African elephant, Thandi, from her beloved companions, sending her to Ontario solely for breeding purposes.

These incidents show only some of the Pittsburgh Zoo’s laundry list of offenses against elephants and a disregard for the welfare of animals in zoos.

As we’ve seen, elephants are not happy in zoos. To learn more and get involved in bettering the lives of zoo animals, visit In Defense of Animals’ website for more information.