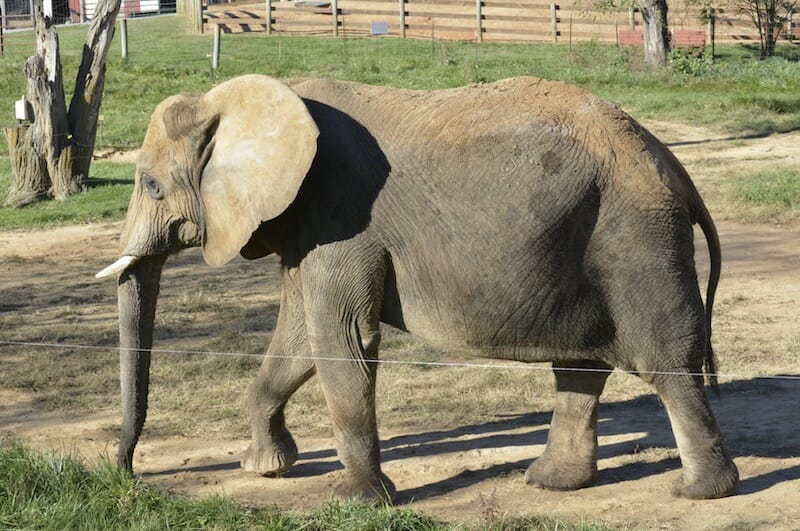 UPDATE (3/18/2022): Sadly, there has been another citation of the Natural Bridge Zoo for their elephant rides. Asha has been shown providing rides without her animal handler being close enough, according to WFXR News. The USDA gave them until March to make sure they would properly supervise the animal at all times. The Virginia Department of Wildlife Resources stated this was a “non-critical compliant item” and therefore, the permit would remain unaffected and they would not conduct an investigation. Unfortunately, Asha is still being forced into giving rides to the public, we will continue to watch and will urge for her to be taken to a sanctuary. — Lady Freethinker Staff

Asha the elephant hasn’t seen another elephant in decades, living in solitary confinement at the Natural Bridge Zoo (NBZ) since she turned one year old.

Most summers, Asha is forced to give rides to visitors. And in winter, she spends her days alone in a cold, damp barn, according to animal welfare organizations.

Asha is only one of many animals abused for profit at the NBZ — animals suffered untreated injuries from hair loss to lameness, zoo workers cruelly jabbed a caged monkey with a pointed stick, animal enclosures have been covered in feces and grime, and rodents infested the property, according to the Roanoke Times.

An investigation by the Humane Society of the United States found that the zoo failed to properly care for its animals, clean its enclosures, or provide animals with clean drinking water. Newborn tiger cubs were immediately taken from their mothers, so visitors could take selfies with them.

Recent legislation passed in Virginia bans the public from interacting with captive wild animals like lions, tigers, and bears. But elephants, who were supposed to be included in this law, are not protected after the owners of Natural Bridge Zoo convinced government officials to remove them from the list, reported The Virginian-Pilot.

All animals deserve proper care, and Asha deserves to live out her days in peace, without people on her back.

Sign this petition urging Natural Bridge Zoo Owner Karl Mogensen to send Asha and the other neglected animals to an accredited sanctuary, and for Virginia Department of Wildlife Resources Executive Director Ryan Brown to suspend the zoo’s license if changes aren’t made.