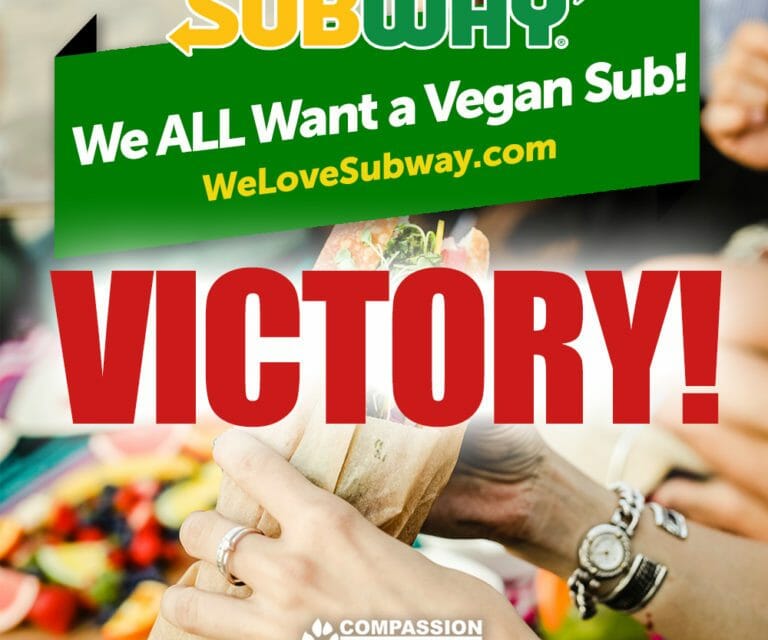 Subway recently announced the launch of a vegetarian meatball sandwich, to be rolled out in stores across Canada and the United States. The sub can be made fully vegan by omitting the cheese.

The fast-food mega-chain has partnered with Beyond Meat to produce specially made vegan meatballs for the new “Beyond Meatball Marinara” offering, available starting September.

Animal advocacy organization Compassion Over Killing (COK) has been asking Subway for plant-based options for years and welcomed the news warmly. Their WeLoveSubway campaign garnered more than 18,000 comments.

More than ever, customers care about where their food comes from and having healthy, cruelty free alternatives. And going meat-free may be good for a company’s profits as well.

“The restaurant has previously acknowledged demand for plant-based products by trialing vegan patties in limited US markets in 2012 and introducing falafel to some stores in 2013. In 2014, Subway began testing ‘Malibu Garden’ and ‘Black Bean’ subs in Los Angeles, and even brought a “Sweet Riblet” sandwich to COK’s home-base, Washington, DC.,” COK wrote in a press release.

“Our guests want to feel good about what they eat, and they also want to indulge in new flavors,” said Len Van Popering, Subway chief brand, and innovation officer, in a statement. “With our new plant-based Beyond Meatball Marinara sub, we are giving them the best of both worlds.”

“Subway’s new vegan sandwich option is helping make vegan eating even more accessible, affordable, and delicious,” said Laura Cascada, senior director of campaigns and outreach at COK. “Millions of customers will be empowered to make more compassionate choices when it comes to their diet, saving animals and the planet one bite at a time.”

The vegan-friendly sub will be tested in 685 locations for a trial period and rolled out more broadly if there is sufficient demand.

“We’re excited to partner with Subway and are grateful that the menu team through to senior management has entrusted us as their innovation partner to deliver delicious plant-based proteins to their guests,” Beyond Meat CEO Ethan Brown said. “We look forward to a long-term partnership with Subway as we together serve and delight existing and new fans of this iconic chain.”