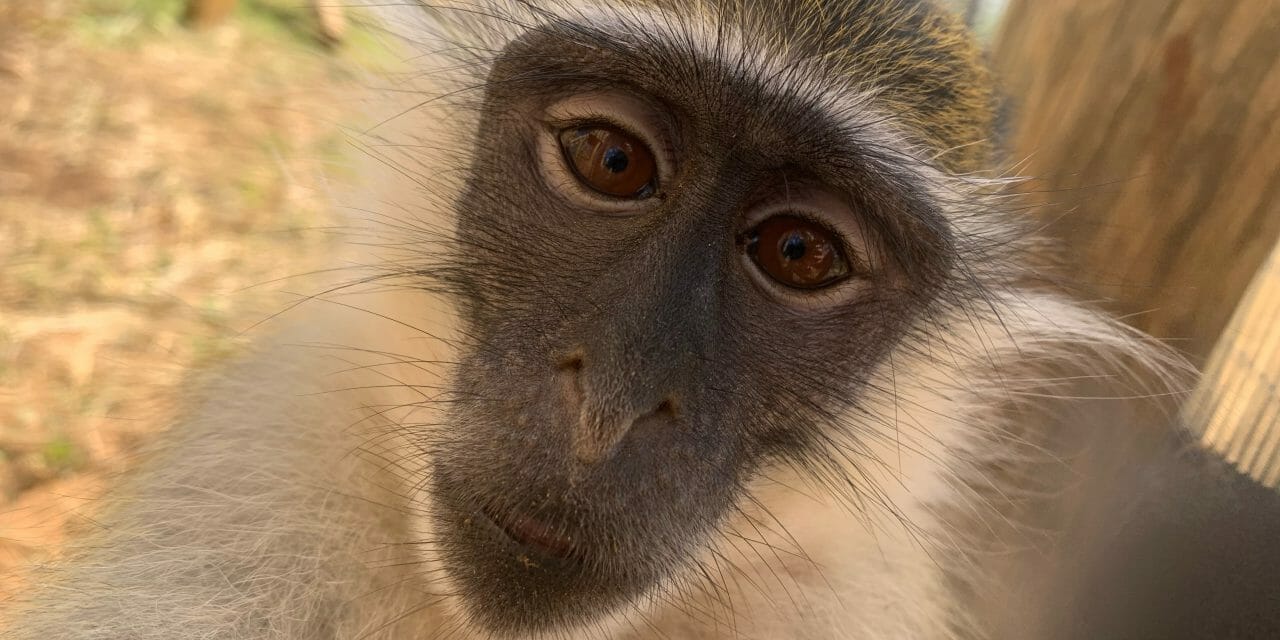 Willis, an African vervet monkey with big brown eyes and silky fur, spent at least three years of his life imprisoned as a “pet” in a tiny parrot cage in a South Side, Chicago home before he came to authorities’ attention.

He’s since been relocated, through a multi-agency effort, more than 1,300 miles to the 175-acre Born Free USA Primate Sanctuary in Texas, where he spends his days playing, running, and “jumping really far,” according to sanctuary staff.

He also enjoys his days munching on his favorite new food: corn.

“Willis is now starting a new life at our primate sanctuary, where he is already having a great time,” sanctuary staff posted to Facebook in a “New Monkey Alert” on Nov. 15. “Despite his rough beginnings, Willis is one of the most joyful and playful monkeys we have ever met!”

Willis likely came from a breeding facility, where he was torn from his mother at a young age, sold online as a “pet,” and transported to the Chicago home, Born Free USA said. That’s even though it’s illegal to buy, own, or breed monkeys within Illinois, according to state law.

Willis’s rescue effort started with Chicago Animal Care and Control (CACC), but CACC’s deputy director Susan Cappello soon realized she and staff were in over their heads.

“CACC is always willing to go above and beyond to do what’s right for the animals in Chicago, but we are not equipped to properly care for a monkey,” she said.

While the sanctuary staff is overjoyed to be able to help Willis, rescues like his are costly, said Liz Tyson, Born Free USA’s programs director and head of sanctuary.

“This rescue operation took up the time and resources of taxpayer funded officials, our nonprofit organization, and private citizens,” Tyson said. “All this to fix a problem created by someone who was cruelly and illegally keeping little Willis as a ‘pet.’

Tyson estimated that thousands of monkeys remain cooped up in inadequate environments as household “pets” in the United States, given varying state laws — including some, like Indiana’s, where it’s legal to own a monkey despite there being no humane way for private citizens with limited space or knowledge about primate care to do so. 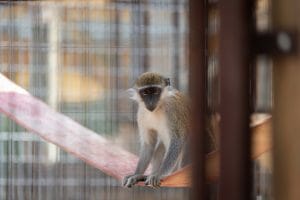 “This case highlights perfectly why the private trade in monkeys in the United States must end,” Tyson said. “He (Willis) was destined to spend more than 20 years’ isolation in a tiny cage, but now will receive expert care and, most importantly, will have the opportunity to live with other monkeys in large enclosures where he can truly be himself.”

Since coming to the sanctuary, Willis has met Kiki — another monkey, rescued over the summer. She is probably the first monkey he’s ever seen since the time he likely was torn from his mother, at a few weeks or months old, Tyson added.

“He is a little nervous and hasn’t quite bucked up the courage to make physical contact with her, but he spends time playing happily with his toys in front of her, then checks to make sure that she is watching him,” she said. “When she gently approaches him, he steels himself and his bravery holds up until she is in touching distance, then he runs away. We hope that he will allow her to make contact with him in the coming days and then he will learn the happiness of grooming and cuddling with others of his own kind.”

Tyson added that given the circumstances, she and staff are very happy for Willis and this progress.

Angela Grimes, Born Free USA’s CEO, said the primate sanctuary has taken in five monkeys in the last five months — four of whom were pets. Monkeys sometimes are seized, like Willis. 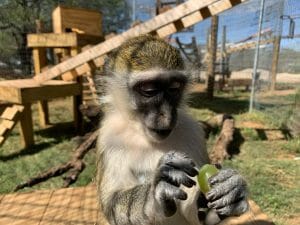 But they’re also frequently and voluntarily surrendered, after they grow up, become aggressive, and attack or bite their handlers, or when people realize they don’t have the space or knowledge to care for the wild monkeys, Grimes said.

“All of this points to one inescapable fact: monkeys and other nonhuman primates are not meant to be kept as pets, and forcing them to live alongside humans as pets is harmful to the animals and potentially dangerous for all concern,” she said.

Rep. Bobby Rush, whose constituency falls within Congressional District 1, where authorities recovered Willis, is a sponsor of the Captive Primate Safety Act — groundbreaking legislation which, if passed, would prohibit interstate sales of monkeys and ban private possession, breeding, or public contact with monkeys.

“While I am grateful that Willis the monkey is now safe in the care of a sanctuary, this story could have ended far differently,”  Rush told WTTW.

If you haven’t already, sign our petition supporting the Captive Primate Safety Act and our petition asking the federal government to do everything within its Constitutional abilities to ban exotic pet ownership in the United States.

And if you’re interested in “adopting” Willis, you can check out his info on Born Free’s website here or more about the adoption program here.

(Adoption doesn’t allow you to take the monkey  home, as they are at their forever homes at the sanctuary, but will help provide for nutritious food, enrichment, and medical care. Adopters receive a package with a photo of their sponsored monkey, a biography, a certification of adoption, a plush toy, and updates!)

SIGN: End Cruel, Dangerous Exotic Pet ‘Ownership’ in the US