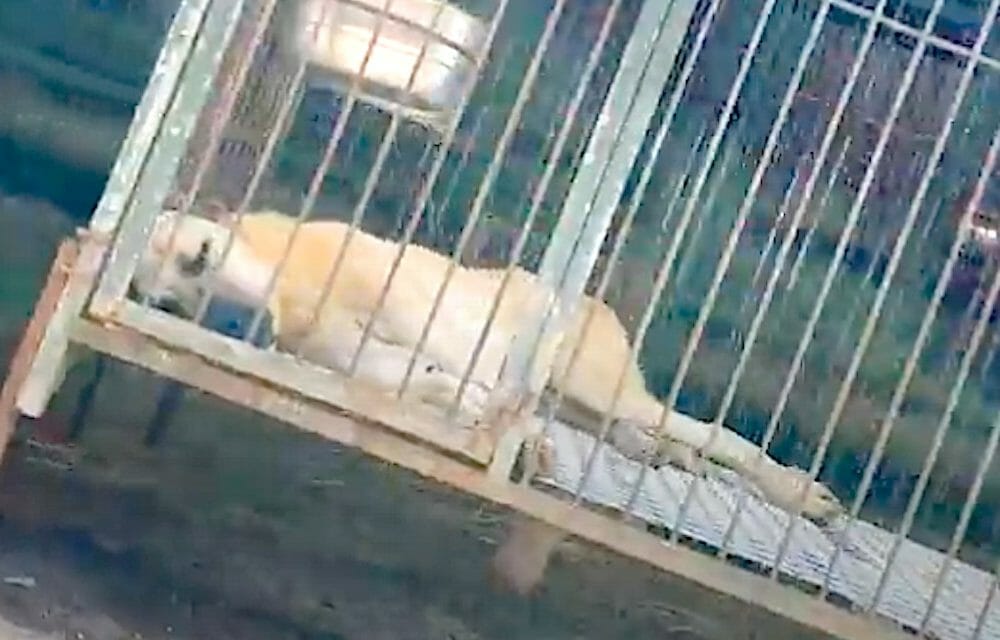 UPDATE (9/30/21): S.Korean President Moon Jae-In hinted that it might be time for the government to consider a complete ban on dog meat, including human consumption of it, during discussion with the country’s prime minister, according to Reuters and BBC.

Moon, a known dog lover, reportedly said it is time to “prudently consider” a ban on eating dog meat, following a briefing on the country’s efforts to improve the handling of abandoned animals and a registration system for dogs.

The country has a ban on slaughtering dogs, but people are still allowed to eat them — although a growing number of people in S. Korea are moving way from that practice.

We will continue to watch developments, as well as to check in on the related subject of House Bill 7035, as proposed by Congresswoman Han Jeong-ae.

Crammed into filthy metal crates and cages, more than 200 dogs cowered in fear waiting to be sold for slaughter at the Nakwon dog auction in Namyangjusk, S. Korea. Sadly, an estimated million dogs suffer similar fates in the nation’s horrifying meat trade.

But there is new hope for the dogs hung, electrocuted and butchered for profit.  A bill proposed by Congresswoman Han Jeong-ae — the country’s newly installed Minister of the Environment — would “eradicate the culture of dog” meat as food in South Korea for good.

Ten members of the Korean National Assembly have already backed this bill. Add your voice now to help this lifesaving legislation pass!

But the horrors have continued in S. Korea — the only country in the world that still has large-scale, commercial dog farms. And some of the country’s legislative leaders have had enough.

House Bill 7035 proposes an amendment to the country’s Animal Protection Act that would explicitly ban the slaughtering and processing of dogs for food or their meat.

The bill provides for penalties against violators, but also includes a 5-year grace period and subsidies for businesses transitioning away from the dog meat trade.

More South Koreans than ever before — an estimated one in four — keep dogs as companion animals and people’s attitudes toward them are changing, the bill’s sponsors note.

“The general public’s awareness of animal welfare has also greatly improved, and there is a very high demand for socially banning dog consumption,” the bill’s text reads.

South Korea’s current leader, President Moon Jae-in, has compassion for animals and even adopted a dog rescued from the dog meat trade named Tory. He’s in the perfect position to leave a legacy for animals that won’t ever be forgotten.

Sign this petition asking President Moon and the Korean Ambassador to the U.S. to support this important bill that will show the world what a great and compassionate country South Korea is and that will prevent the suffering and deaths of thousands of innocent dogs killed in the horrific dog meat trade.