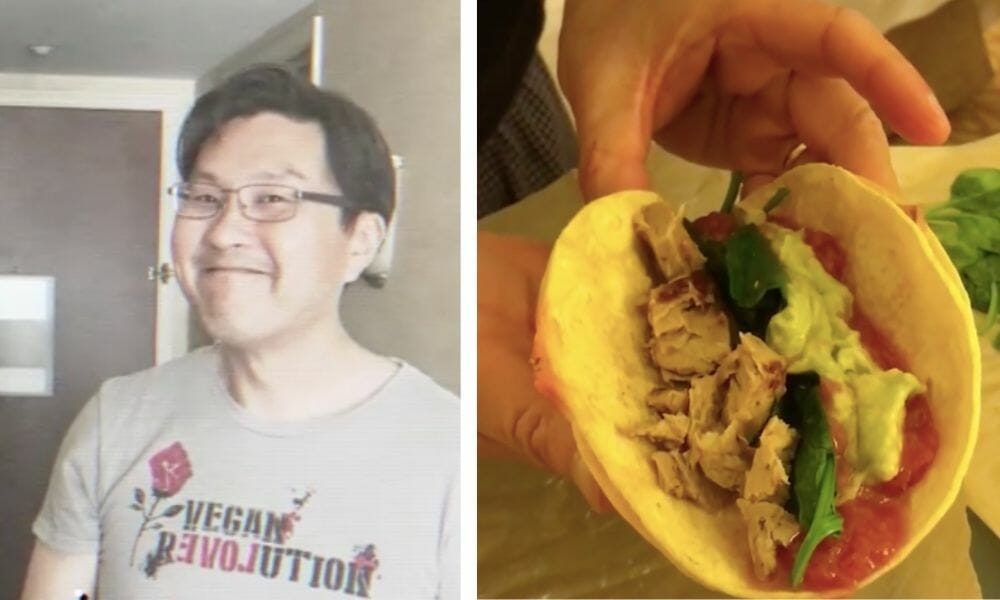 When Chinese American and Vegan Chef Ted Lai was a teenager his grandmother had a heart attack. Lai’s great uncle also suffered from heart issues.

The internet didn’t exist yet, so the young Lai turned to health journals that informed him that heart issues had a hereditary aspect. The research also connected increased likelihood of cardiac distress to eating meat.

That knowledge led Lai, at age 15, to become vegetarian — to the consternation of his mother.

“My mom was absolutely opposed,” Lai told Lady Freethinker. “It was very different to her. She told me that if I was going to go vegetarian, she would refuse to cook for me.”

The parental opposition made Lai become “much more serious” about eating plant-based, he said, with a laugh.

“I learned to cook, began cooking for friends, and realized I loved cooking,” he said. “My mom eventually relented and began cooking a few more dishes that were vegetarian-friendly.”

Fast-forwarding a few decades found Lai with a family of his own, including a young daughter allergic to dairy. Not wanting her to feel different or like she was missing out, Lai transitioned the entire family to vegan living.

Lai’s experiments with vegan living and his love of cooking led him to establish several plant-based endeavors, including the series “Vegan MacGyver” — in which he teaches people how to cook delicious vegan meals using standard hotel gadgets like an iron — and businesses WokWildSide and Plant Alchemy. 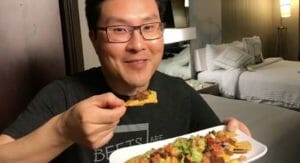 It’s interesting that Lai, who spent most of his childhood without access to the internet, would find his start as a social media sensation.

“On Instagram, I was able to share some of the things I was cooking for my family,” he said. “People would post about them, and all of a sudden there were all these strangers who were very curious about what I was doing. It was all very odd to me.”

What’s extra impressive is that Lai has built his vegan following while holding full-time jobs. He’s currently the vice president of Student Services and Success at Calbright College in Huntingdon Beach, Calif.

Lai spoke with Lady Freethinker about growing up Asian American, his shift to vegan living, the inspiration behind his various entrepreneurial efforts, and how he feels about the future of plant-based eating.

Answers have been edited for length.

What catapulted you into vegetarian, then vegan, living?

I used to read things in health journals at the library. Right around when I was 15, my grandma had suffered a heart attack. And my great grand uncle was having heart issues as well. I was reading about how there are some genetic issues that are hereditary, and also the effects of consuming meat, especially cholesterol and fat in your diet, so I decided I would be vegetarian.

Fast-forward quite awhile, to the age of 30 or so. Our younger daughter was allergic to eggs and dairy. I thought, I don’t want her growing up feeling like she’s different, so I’m going to go vegan with her. We were already vegetarian as a family, and as the cook in the family, everybody had to go vegan.

What were some of the health benefits you and your family noticed after going vegan?

I had chronic high cholesterol as a vegetarian. I refused to take medication for it. Within six months of going vegan, my first blood work back showed I was clear.

For my wife, she had psoriasis. Her back had red, itchy patches that covered about 60 to 70 percent of her back as a vegetarian; within a year of her being vegan, it was down to maybe 5 percent.

Our older daughter suffered from asthma. She was using the inhaler multiple times a week. After going vegan for about a year, she was down to once or twice a month.

You couldn’t ignore those things: For all three of us, we had some huge health benefits.

Energy wise, no issues at all. Our younger daughter started being vegan by the age of about three. She’s now 21 years old. She played competitive ice hockey through much of her childhood, and she played at a high level. She was out there doing one of the most physical sports. 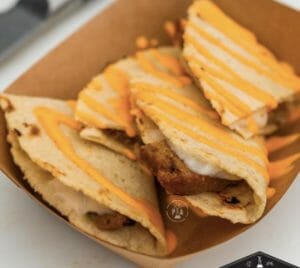 Tell us more about what inspired your vegan entrepreneurial efforts.

I had always wanted to have a food business. I had worked as a cook, a chef, in previous roles. The thing that changed my ability to put food out there was social media.

The hockey, the food, it all came together. I was going to tournaments every other month or so out of state, and often times we’d go places with no vegan food, where you couldn’t even really build a meal out of sides. We had to cook in a hotel room then. At first it was just simple sandwiches and salads. But I thought: What if we could protect the iron, buy parchment paper, could we cook a more robust meal? That’s how Vegan MacGyver was born — the ability to show how easy it could be to be vegan while on the road with an iron, a hot water pot, and a blow drier.

Are there any funny stories or ‘bloopers’ from early attempts to make vegan food in a hotel?

There were mistakes all the time. First of all, if you’re cooking with an iron, it takes a lot longer, and it only cooks one side. We had a real fail when we made fresh pizza one time; rolling out the dough was difficult, and you had raw dough on the bottom side.

What questions do you get most often when you do Q&A sessions?

People will often ask for the easiest things to do, tips for being vegan. But the thing I answer more isn’t even about Vegan MacGyver; it’s about raising a vegan family, how you get your kids to be vegan.

I tell everyone pretty much the same thing: You’re the parent. You decide. That’s how we were treated when we were growing up. Your parents decide what is best for you, and that includes food choices.

At a very young age, our girls were eating kale. I remember the first time when our younger daughter — she must have been four or five years old — asked for a second serving of kale, and that was a big moment.

How do you explain to your children why your family is vegan?

Did you experience any racism growing up Asian American in this country?

I was born and raised in this country. I learned very early on that there are some mean people out there. In kindergarten, I remember people pulling their eyelids to make themselves look “Asian” and making fun of me. But in third grade was when one of my good friends, whom I played basketball with all the time, declared that he couldn’t be my friend anymore because of “what I did at Pearl Harbor.” That was just this crazy moment because I didn’t even know what he was talking about; I had to look it up in an encyclopedia. I was just flabbergasted because I am of Chinese descent, and I was born in 1970 — so there’s nothing I would have done at Pearl Harbor at all. Japanese Americans also had nothing to do with Pearl Harbor, even if they were adults.

There was just this amazing lack of logic that astounded me. But things like that happened as I was growing up. Some of it landed really hard. Some of it bounced off of me, like when people yelled “Eat a bowl of rice,” which was kind of a weird insult, because I love rice.

I have for sure seen an uptick in anti-Asian harassment, discrimination, violence. It’s little things: being on a bus with my family and having people move away from us, or coughing in a public area and having disgusted looks, even though I covered my mouth.

Racism is extremely personal to me, but so is animal welfare. Animal welfare and human welfare is very clearly linked. How we respect each other is generally expected, but we need to have that same empathy and care for animals as well.

There is that lack of logic — the believing that one ethnicity or race is better than another. It’s that same lack of logic that’s like that book, “Why We Love Dogs, Eat Pigs, and Wear Cows” (by Melanie Joy): Where do you draw the line of what’s a pet and what’s not? One person’s food is another person’s sacred animal or pet, and the sooner we get to the point where we treat all animals with that type of respect and care, the sooner we’ll get out of things like the pandemic.

It might seem tenuous as a connection, but in my mind it’s a strong connection between making sure we treat each other with respect and love and empathy and treating animals that way as well. 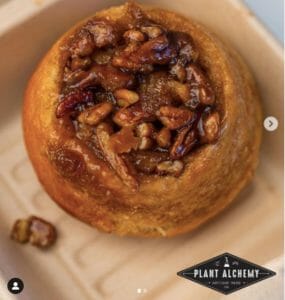 Are you hopeful for the future of plant-based eating?

I’m very excited because even though this [the shift to plant-based eating] is a few decades later than I would like it to be, there’s much more openness in the general public toward moving toward this. Twenty years ago, if you wanted vegan cheese, you had to buy Tofutti. If you wanted a veggie burger, you only had one or two choices.

One of the best, most easily accessible kale recipes we do is a Crispy Kale. It’s a single bunch of kale. You tear off the leaves, wash them, get them relatively dry. Get them in a bowl with a single teaspoon of oil (I use a toasted sesame oil) that you massage in. Spread it out on a sheet pan and sprinkle on whatever flavors you want (a little salt, a little nutritional yeast, or I love a Japanese flavoring called Gomasio, which is a crushed sesame seed with salt). Oven bake at 375 degrees Fahrenheit for about 10 minutes; if it doesn’t seem crispy, stir it around and cook for a few minutes. It does go from crisp to burnt, though, so you have to watch it.

People often think of veganism as hard, and it’s not. It’s just different. One thing to know is that anyone can cook. You can develop those same skills. The skill level increases as you do anything more. But you also don’t have to know all that. There are so many [vegan] options out there for people to buy.

What I’ve learned over the years is that if something seems difficult, it makes it more worthwhile to do it, and it doesn’t mean it’s not worth it to try. As you continue to try, you get better at it, you get more comfortable, and then it’s easy.