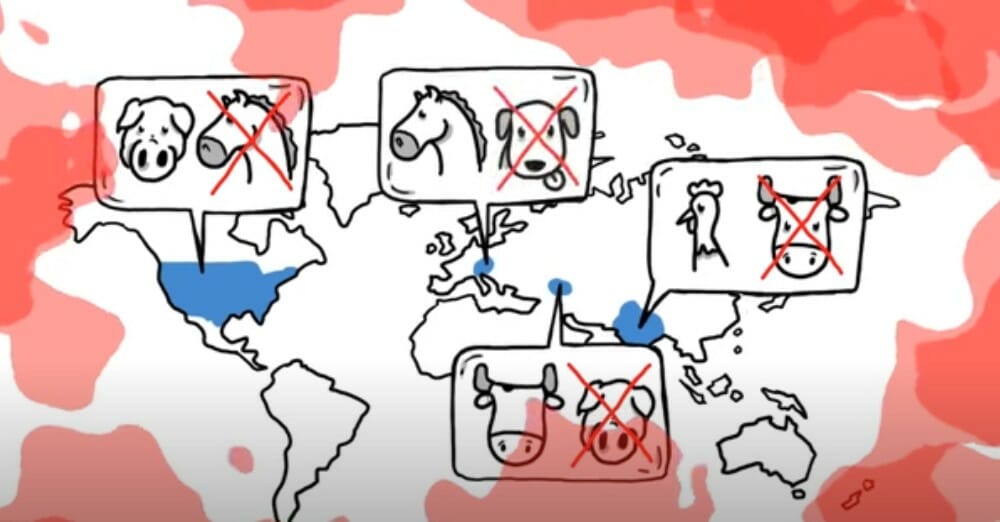 Image via Beyond Carnism.

When Dr. Melanie Joy was 23 years old, she unknowingly bit into a hamburger riddled with campylobacter, a bacteria that most often resides in contaminated or undercooked meat.

Many people who become infected with this bacteria can recover on their own in a matter of weeks, only enduring some unpleasant symptoms. In Joy’s case, she was hospitalized.

Joy — now a Harvard-educated psychologist who has written six books about people’s relationships with animals and with each other —  classified herself at the time of her illness as someone who loved animals and always had. She also said she could pet her dog with one hand and eat a pork chop with the other without any second thoughts.

Lying in a hospital bed, hooked up to IVs of antibiotics, she started to think about why she had never before questioned eating meat.

“I had never been that sick in my life,” she told Lady Freethinker (LFT), “and I was disgusted by meat.”

Although Joy regained her health, she was changed. She walked down the same aisles in familiar grocery stores and saw the neatly packaged cans and products for what they were: dead animals.

She watched videos of factory farming. She learned that each year animal agriculture slaughters more than 72 billion land animals and between 1 trillion and 3 trillion fish and other aquatic animals worldwide.

She learned about how the unnecessary demand for meat and dairy products is also a major contributor to environmental degradation, human disease, and human rights violations. She also started talking to others, people she knew to be intelligent and compassionate, about her findings.

She found they didn’t want to hear what she had to say.

“What I learned shocked and horrified me. I couldn’t believe the scope of what was happening,” Joy told LFT. “But people I tried to talk to told me, ‘Don’t tell me that, you’ll ruin my meal.’ I became curious about why rational, compassionate people stopped thinking when it came to what can only be called a global atrocity.”

She decided to pursue doctoral research in psychology at Saybrook Graduate School. Her research led her to consider that an invisible belief system could condition people to eat certain animals.

She coined that concept “carnism.” She also created a nonprofit, Beyond Carnism, to raise awareness about these issues.

“In meat-eating cultures around the world, people typically don’t think about why they eat certain animals but not others, or why they eat animals at all,” Joy wrote on Beyond Carnism’s website. “As long as we remain unaware of how carnism impacts us, we’ll be unable to make our food choices freely because without awareness, there is no free choice.”

Beyond Carnism takes a two-pronged strategic approach to its mission, with the dual goals of weakening carnism and strengthening the counter system, veganism.

“We very much believe that true transformation for human and nonhuman animals is only going to be possible when we change the way we relate, and when we relate in ways that are healthy,” Joy said.

Joy encouraged people to start confronting the difficult and often inconvenient truths of carnism, noting that animals aren’t the only invisible victims impacted.

People are, too. Studies have linked diets saturated with meat and dairy products to increased health risks, including for heart disease, diabetes, and some types of cancers.

Joy took the time to share with LFT her insights about the psychology behind eating meat, the most effective ways to advocate for a vegan lifestyle, and how to bear witness — and counter resistance — without getting burned out or overwhelmed.

Answers include combined interview highlights and excerpts from Beyond Carnism’s website and have been edited for length. 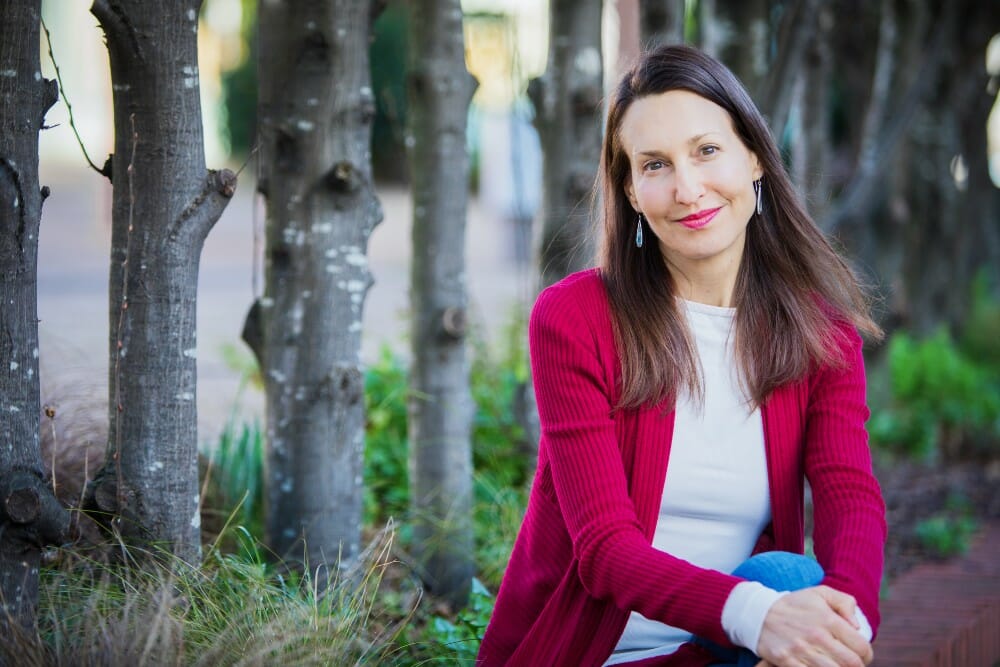 Lady Freethinker (LFT): How does carnism work, exactly? Why are so many people resistant to face the truth about the foods they eat?

Carnism, like other oppressive systems such as patriarchy and racism, uses a set of psychological defense mechanisms that distort our thoughts and block our natural empathy so that we act against our core moral values of compassion and justice without fully realizing what we’re doing.

The primary defense of carnism is denial. If we deny there’s a problem in the first place, we don’t have to do anything about it. Another carnistic defense is justification. The main way we learn to justify eating animals is by learning to believe that the myths of meat, eggs, and dairy are the facts of meat, eggs and dairy. These myths are expressed largely through the “Three Ns of Justification” — eating animals is normal, natural, and necessary.

Carnism also uses a set of defenses that distort our perceptions of meat, eggs, and dairy and the animals we eat so that we can feel comfortable enough to consume them. We learn, for example, to view farmed animals as objects (we refer to the chicken on our plate as something, rather than someone) and as abstractions, lacking any individuality or personality (we assume that a pig is a pig and all pigs are the same). And we learn to create rigid categories in our minds so that we can harbor very different feelings and carry out very different behaviors toward different species (cows are for eating and dogs are our friends).

With awareness, you can choose the role you play in the system.

LFT: What about people who want to make a change, but aren’t ready yet to go vegan?

MJ: People can learn about the issues; they can follow us on social media and watch and share our videos. If they aren’t ready yet to commit to being vegan, they can try to be as vegan as possible.

People also can become vegan allies. A vegan ally is a supporter of veganism and vegans even though they are not yet fully vegan themselves. Allies can help raise awareness of carnism, donate time or money to vegan organizations, and use their influence however they see fit to help transform carnism.

LFT: Can you share an overview and some tips of what you teach in your online and in-person trainings through the Center for Effective Vegan Advocacy?

MJ:  We help vegan advocates learn the principles of effective communication. We also help teach vegans to recognize when they are on the receiving end of carnistic prejudice, such as when people say, ‘Oh, you’re a picky eater’ when they (vegans) pick the ham out of a salad. So many vegans buy into the negative labels that people put on them; we help teach them how not to internalize them.

Vegans also sometimes feel that they have to be experts on everything, from nutrition to animal agriculture. You don’t have to be an expert to be able to speak to the issues.

There are two main tips that vegans have said are really helpful. When advocating veganism, instead of asking someone to go vegan, ask them to ‘be as vegan as possible.” Also, invite people to become vegan allies.  There can sometimes be a mentality of ‘you’re vegan and part of the solution or not vegan and part of the problem,’ and that can turn people away from a cause that needs as much support as it can get.

LFT: Bearing witness to massive suffering can be hard. What effects have you noticed, and how can people keep from burning out?

MJ: There’s something called secondary-traumatic stress (STS). It’s like post-traumatic stress, but there’s a difference; STS affects those who witness violence, rather than the direct victims of violence. We have a lot of vegans who have been traumatized.

When people become traumatized, they develop a new world view. STS can lead to misanthropy, or a loss of faith in humanity. There also are vegans who feel guilty if they start to feel happy or enjoy their lives when they know animals are suffering in slaughterhouses somewhere.

It’s okay to be happy. It’s important if you’re already a part of the solution to stop watching the violent videos, to give yourself permission to stop witnessing. We need to stop feeding the trauma of the movement.

And while it’s easy to feel that the problem is so big that our individual efforts won’t make a difference or that the system will never change, the truth is that every choice we make does make a difference — to others and to ourselves.