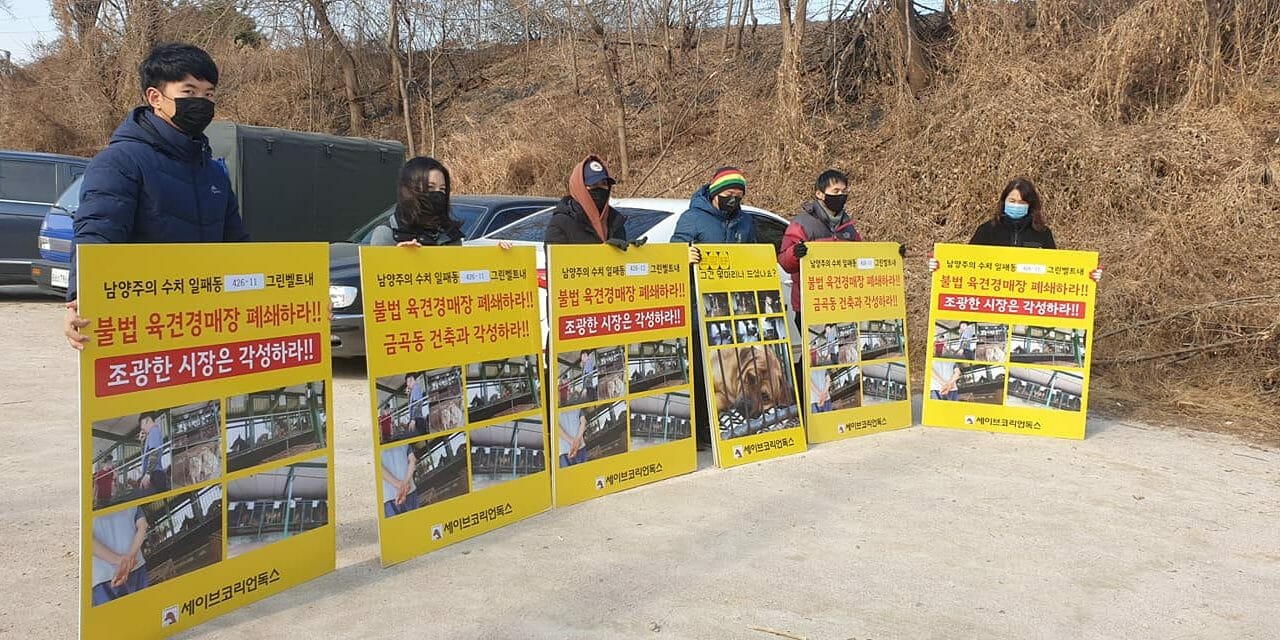 Lady Freethinker (LFT) partner Save Korean Dogs (SKD) is saving helpless dogs’ lives for at least one more day by blocking dog meat trucks from getting to the cruel Nakwon Auction House, where hundreds of dogs are caged and sold for slaughter each week.

“By protesting at the auction house, no butcher’s trucks [are] able to come in for auction,” SKD Founder Nami Kim wrote on Facebook. “Our presence there is saving 200 dogs per day. We are there three times a week — Monday, Tuesday, and Friday — together with police officers protecting us.”

Due to the continuous and mounting pressure on local officials by these brave activists, the police have interviewed the auction house owner four times, and the city has fined him more than $100,000, according to Mayor Cho Kwang-han’s secretary, Mr. Son.

One of the survivors of this horrifying dog meat auction house is Pretty, a 10-year-old, emaciated dog rescued by SKD last week. She is riddled with parasites and infections, and Kim is actively working to nurse her back to good health.

“You name it, she has it,” Kim wrote on Facebook. “Heartworm positive, skin issues, pneumonia, cataracts, conjunctivitis, earworms, tape worms.”

She is just one of hundreds of abused dogs at the Nakwon Auction House.

In August of 2019, an undercover LFT investigation exposed the cruelty at the Nakwon Auction House with video and photographic evidence of dogs locked in cages and prodded with a metal hook before being sold for slaughter to the highest bidders. More than 200 dogs sold in a matter of hours.

Since then, LFT’s petition to shut down this auction house of horrors reached more than 40,000 signatures and has been hand-delivered to the Mayor’s office in Namyangju City, S. Korea.

Now, an official government petition is asking S. Korea’s President Moon Jae-in to put an end to the cruelty and close this terrifying facility. To add your name, go to the website, scroll down, and click on the blue button. Citizens of all countries and allowed and encouraged to sign.