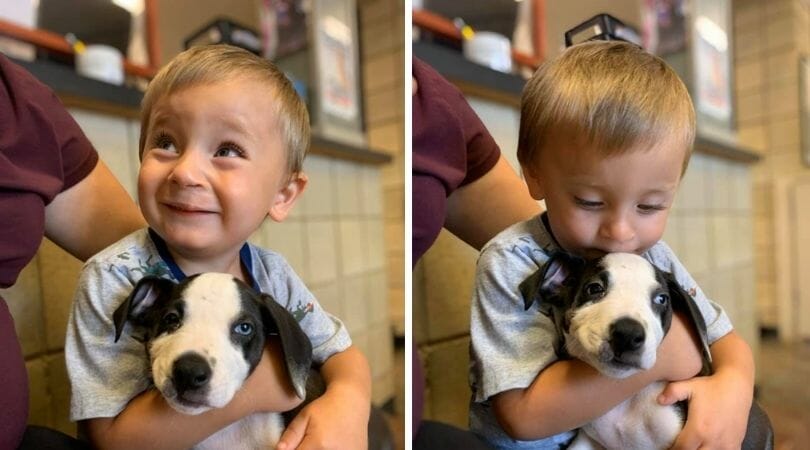 Bentley Boyers, a toddler born with a cleft lip, recently fell in love with a puppy from the Jackson County Animal Shelter in Michigan who has the exact same condition.

Bentley’s dad, Brandon, went to the shelter looking to adopt two chickens but ended up noticing an adorable puppy who reminded him of his two-year-old son.

Bentley and the puppy bonded immediately when they met, and his parents knew they had to make Bentley’s new best friend a part of their loving forever family.

The little boy has already endured two surgeries to correct his cleft lip and faces a bone-grafting procedure in the future. But Bentley is becoming stronger by the day, and the puppy will also be there to provide him with emotional support throughout his ongoing medical care.

“To see him have something in common with a puppy means a lot [because] he can grow up and understand that he and his puppy both have something that they can share in common,” Ashley said.

The Jackson County Animal Shelter rarely encounters puppies with cleft lips, but does not foresee Bentley’s new companion having any serious health problems.

“Her disability is really not holding her back, and as she grows, they’ll be able to see more if there’s any change that has to do with that. But she’s doing really well,” said Animal Services Director Lydia Sattler. “She might look a little different than a normal dog would, but it’s not slowing her down at all.”