Meet Allie, Former Backyard Breeding Dog Helping Save Others Like Her 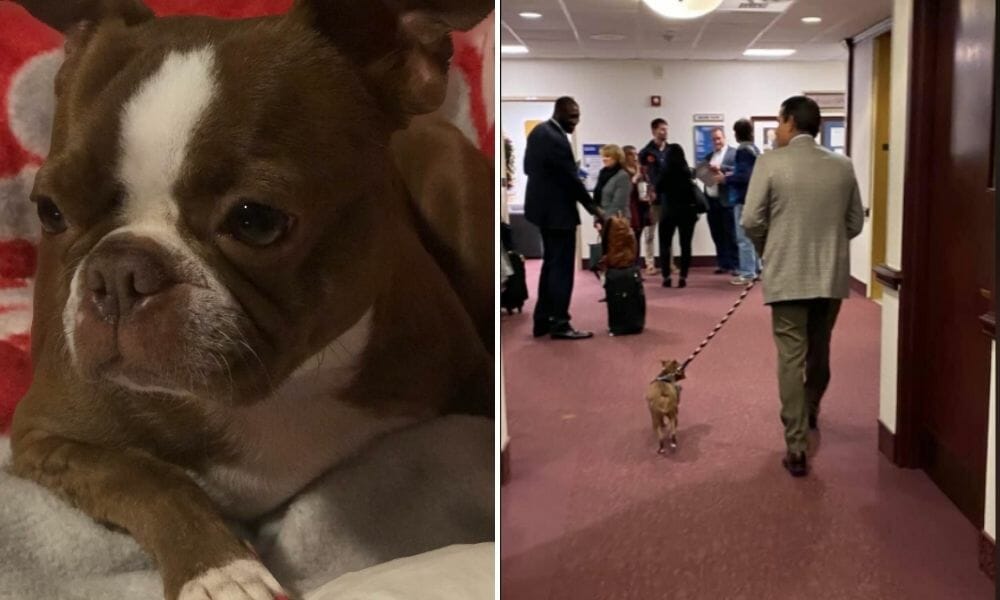 Three years ago, a brown-and-white Boston terrier named Allie Katherine was scrapping for food against six other terriers in the kitchen of a backyard breeder.

Today, she’s a beloved celebrity at Florida’s state capital in Tallahassee, where her rescuer and guardian Dave Heine takes her while advocating for a new bill that could save countless lives.

Allie was less than three years old, and pregnant with her third litter of puppies, when the backyard breeder took her to a Florida veterinarian for an emergency C-section. The breeder surrendered her to staff, saying he couldn’t pay for the surgery, according to Heine. 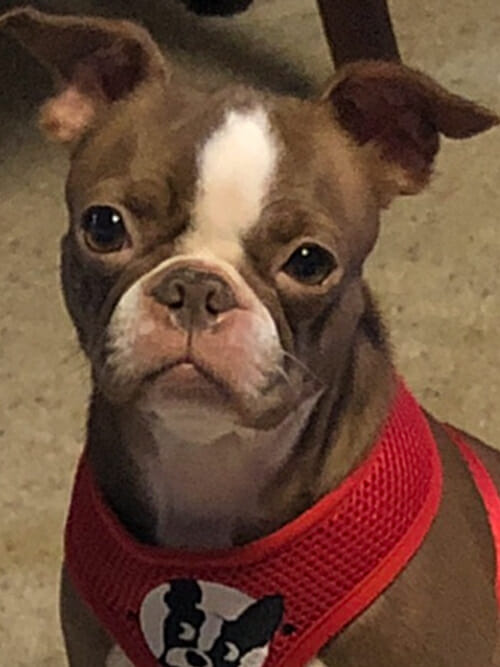 Allie’s tiny face and legs bore visible battle scars from her scuffles in the breeder’s house. The veterinarian and staff were aware of Allie’s abuse. But Florida state law does not require veterinarians to report suspected animal cruelty, so they didn’t.

Instead, they returned Allie’s five healthy puppies to the breeder, who said he hadn’t agreed to surrender the puppies — just Allie. A veterinarian technician took Allie home but later sold her on Craigslist for $400.

Finally, Allie’s story took a happy turn. Heine, the man who spotted her online, was a member of the high-risk intake team for the Boston Terrier Rescue of Florida. The nonprofit received a generous donation to bring Allie into the rescue’s fold, and Heine agreed to foster her. He and his wife fell in love with Allie. In an epic “foster fail,” the couple decided to adopt her.

“The little booger grew on my wife and I,” Heine said affectionately. “We decided Allie would never want for anything ever again, and that included a loving permanent family.”

Allie, now five-and-a-half years old, has since traveled to the Tallahassee’s stately halls in style, sporting hot pink nails and lapping up the adoration of those who now know her well.

This legislative session, Allie’s Law passed two Senate committees but died on the floor when introduced to the House, with discussion postponed due to technical problems with the bill’s language. Florida missed a chance to join more than a dozen other states that mandate the reporting of animal abuse by veterinary professionals to law enforcement.

But Heine and the sponsoring legislators’ efforts weren’t for naught. Allie’s story caught the attention of staff at the Animal Legal Defense Fund (ALDF), a California-based animal law advocacy organization that signed on to help iron out the bill’s language.

Alicia Prygoski, the legislative affairs manager for ALDF, told Lady Freethinker that hearing Allie’s story, and seeing how tirelessly Heine had worked on her behalf, convinced the organization to get involved. 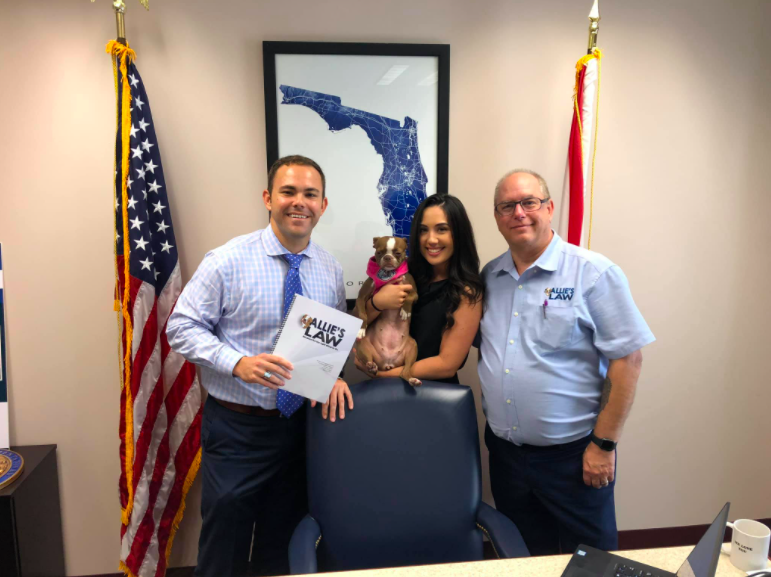 ALDF has also worked on veterinary reporting of animal cruelty in several other states as well, given the requirement’s potential to vastly decrease animal suffering and save lives, Prygoski said.

“Mandatory veterinary reporting of animal cruelty could be an animal’s only chance at getting out of an abusive, and potentially deadly, situation,” she said. “It is imperative that we empower veterinarians and veterinary professionals to speak out and report suspected cruelty.”

With ALDF’s help, the revised Allie’s Law is now simplified, streamlined, and consistent with existing Florida law. The changes will also ensure more strategic and direct reporting to law enforcement and protection for a broader range of animals than last session’s bill.

“Allie’s law accomplishes one critical goal,” Prygoski said. “It gets information about suspected cruelty into the hands of those who have the authority to take action to stop the cruelty.”

Numerous studies have reported that those who abuse animals often abuse people, including a 10TampaBay investigation that found 42 people in the area arrested for abusing animals who also were arrested for domestic violence.

“Research suggests a direct link between acts of cruelty to animals and violence towards humans,” she said. “Whether it be domestic violence, elder abuse, child abuse, or other violent behavior, requiring veterinary reporting for instances of animal abuse could help lead law enforcement to a situation in which humans are also experiencing violence.”

With both sponsoring legislators’ continued support, the revised Allie’s Law will be re-introduced next legislative session. If the bill passes in 2021, it will be the first time in Florida history that reporting animal abuse is a requirement.

“Veterinarians swear an oath to protect the safety and welfare of animals,” Daley told ABC Action News. “This is no different. This is just reinforcing that oath.” 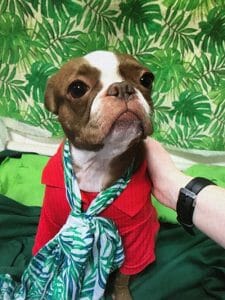 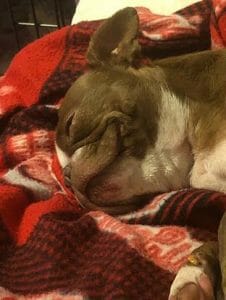 Dave Heine said it’s taken Allie almost two years in the couple’s loving home to recuperate from her prior abuse. “This is the first she fell asleep with a huge smile on her face, reminding me that she has the greatest life ever now and she is coming out of her protective shell,” he said. (Courtesy Dave Heine) 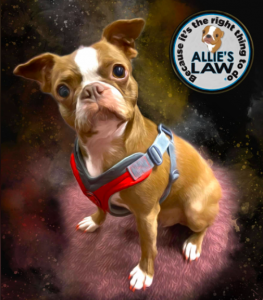 A watercolor portrait of Allie that Dave Heine commissioned from Watercolors for Donations. (Courtesy of Dave Heine) 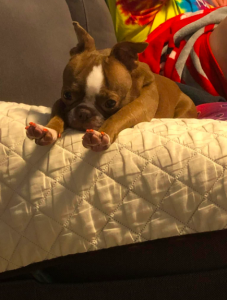 “This is a bored Allie. She was tired of the pandemic and being cooped up and wanted out to go play,” Dave Heine said. (Courtesy Dave Heine) 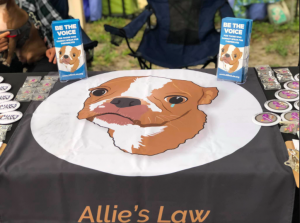 Allie’s Law logo includes Allie’s face, with a tear drop to symbolize the suffering and pain she endured at the hands of a back yard breeder before she was rescued. (Courtesy of Dave Heine) 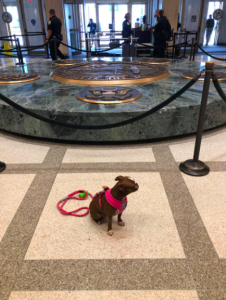