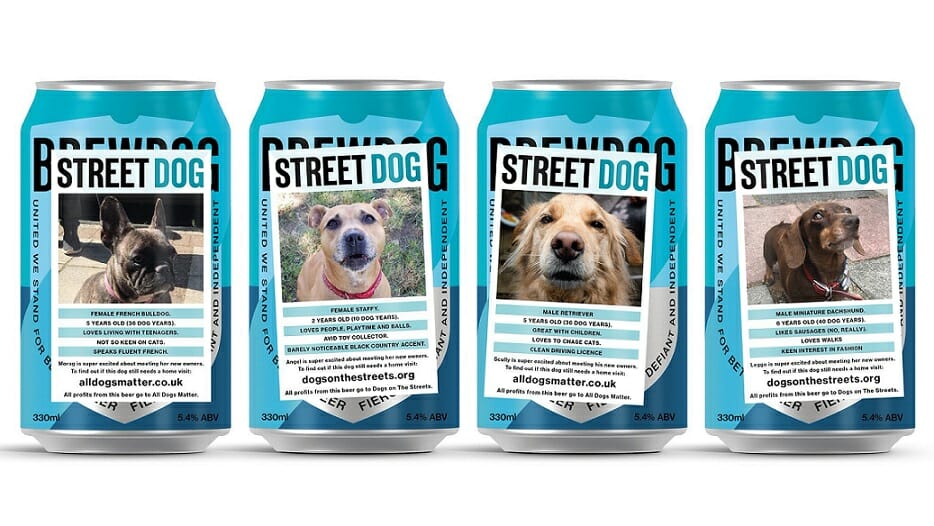 For a limited time, BrewDog is rebranding its popular Punk IPA as ‘Street Dog.’ Each can features one of four adoptable pups from two nonprofits — Dogs on the Streets and All Dogs Matter — with 100 percent of profits going to help these organizations.

This collaboration came about after Gervais, tweeted that he loved BrewDog’s Punk IPA.

“At BrewDog we are always looking for ways to use our business to do good,” James Watt, BrewDog co-founder, told The Sun. “When Ricky tweeted us with a genuine endorsement for Punk IPA, we wanted to use our platform to donate to causes he’s passionate about.”

On Twitter, Gervais explains how he and BrewDog came up with the ‘Street Dog’ project, adding, “If that was my only legacy, I’d be happy with that—sorting out homelessness with dogs.”

Our secret talks with @rickygervais resulted in the launch of Street Dog: limited edition Punk IPA.

We teamed up with @dotslondon & @AllDogsMatter to help pups find new homes, and will be donating 100% of profits to these charities.

The Golden Globe and Emmy-nominated actor is no stranger to promoting adoption or advocating for animals. He’s spoken out against factory farming, trophy hunting, the dog meat trade, and many other cruel practices.

For now, the ‘Street Dog’ cans are only available in the UK, but BrewDog is working to release the beer in the United States, Australia, and Germany, according to Watt.

This isn’t the first time a brewery has promoted adoption either. In January, Florida’s Motorworks Brewing featured local shelter pups on cans of its ‘Adoptable Dog Cruiser Kölsch.’ This effort even helped one woman find her long-lost pet.

Lady Freethinker applauds Ricky Gervais and BrewDog for using their platform and business to make the world a more compassionate place.