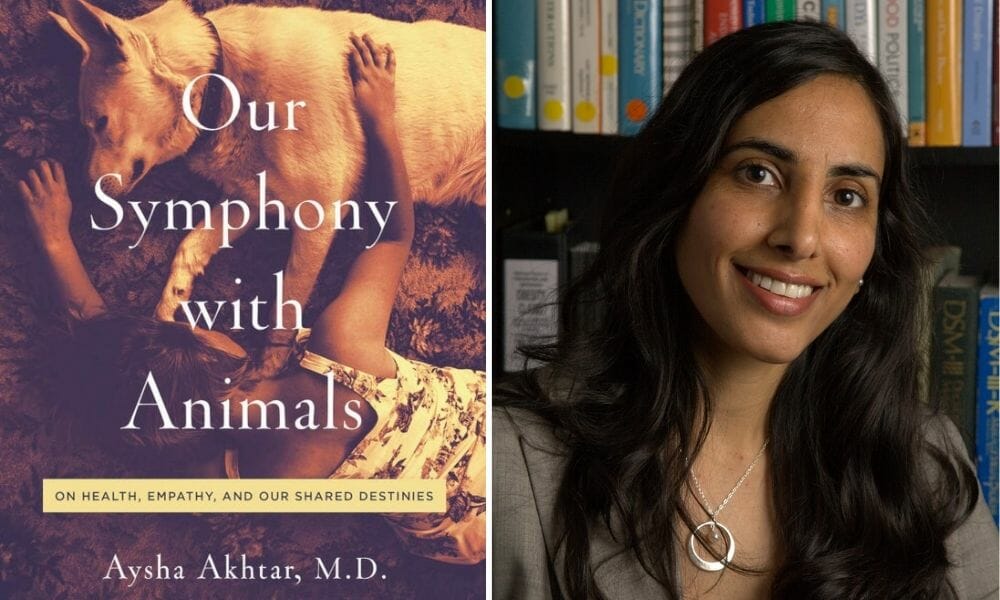 Our Symphony with Animals, a masterpiece by Aysha Akhtar, probes people’s complicated relationships with animals while underscoring that empathy toward other species benefits humanity in remarkable ways.

Akhtar — a recognized leader in the fields of ethics, neurology, and animal welfare —  almost immediately establishes her sense of humor when she quips that our relationships with domesticated species can often be — well —  messy.

She acknowledges that sharing a home with a companion animal also means tolerating “vomit congealing on the floor, poop rolling on the bed, fur clinging to our clothes, urine-soaked curtain hems, saliva-covered slippers, ripped-up furniture, acid breath, stinky litter boxes, rude sniffing…” (You get the picture).

She also proves in the first pages of her book that she’s not afraid to tackle taboos.

The heartrending opening chapter leads with a memory from her childhood of the family friend who repeatedly sexually abused her and taught her to keep quiet. Then, she introduces us to Akhtar’s hero, a tiny tan pup named Sylvester, who reverses the cycle and teaches her to find and use her voice.

That balance — between darkness and abuse, and hope and redemption — is one that Akhtar masterfully maintains throughout the remainder of the book.

From witnessing a relative slam her beloved Sylvester into a wall to “discipline” him for peeing in the house, to her apprehensive forays into an industrial chicken farm, to her intrepid correspondence with a serial killer — who started by abusing and killing animals and then moved on to murdering multiple women — Akhtar dangles us over the depths of human depravity.

But she doesn’t let us drown there.

The book contains enough redeeming examples of human compassion and care to somehow convince readers, by the end, of Akhtar’s assertion that empathy is the natural human tendency and also the future of our evolution as a species.

She introduces us to pet guardians hit by Hurricane Katrina who went to extreme lengths to recover and protect their animals, as well as to domestic violence survivors who chose to dwell in their cars rather than surrender their pets so they could move into shelters.

She snapshots the world of people experiencing homelessness whose solace and first priority are their companion animals — including a woman who digs through trash in order to feed a colony of feral cats before herself.

Akhtar also meets up with other people whose lives were transformed as utterly and unexpectedly by animal encounters as hers was by her friendship with Sylvester.

Among them are a hunter who swore off hunting after he rescued a deer trapped in ice, a former mobster who fell in love with an emaciated shih tzu, a woman nicknamed “the Crazy Cat Lady of Brooklyn,” and prisoners incarcerated for violent crimes who found new purpose in caring for animals through progressive corrections’ programs.

All of those stories speak to the deep, lasting, and powerful benefit that comes from compassionately entwining our lives with those of other animals.

“Animals remind us that the world is larger than us,” Akhtar writes. “They can teach us to look beyond the racism, poverty, and cruelty in our lives, to step out of our daily struggles and see the beauty that surrounds us.”

Those who pick up a copy of Our Symphony With Animals Readers might discover, by the end of the haunting and engrossing journey, that they too have become empowered to speak up about the things that matter most.

They likely also will find themselves becoming more empathetic toward the other beings that share this precious planet with us, by their own right. That, after all, is Akhtar’s goal.

“Moving forward, how we choose to be with animals will depend on how willing we are to be with them. Not as predator and prey, not as master and servant, but as kin, as partners, and as friends, strolling shoulder to shoulder along the dips and rises that stretch before us,” she writes. “We lose nothing when we do so. What we gain is our health, our happiness, our humanity. And friendships that are irreplaceable.”