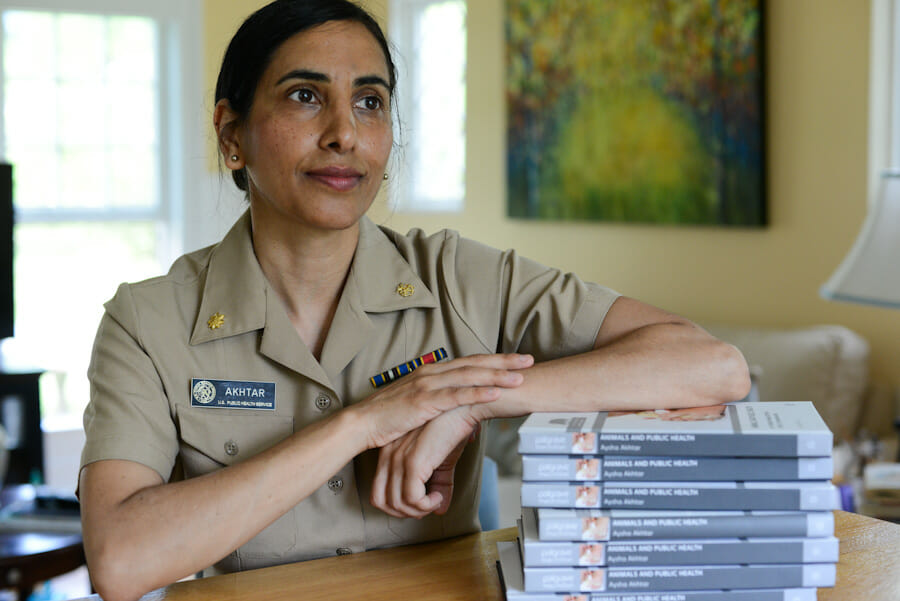 Dr. Aysha Akhtar with copies of her first book, Animals and Public Health, which was published while she was serving as a Lieutenant Commander in the Public Health Service. (Photo Credit: Jo-Anne McArthur, used with permission)

Dr. Aysha Akhtar is on a mission to show how treating animals with kindness also benefits people in a “win-win” situation for all.

The double board-certified neurologist has a diverse and impressive list of life experiences: As a U.S. veteran, she’s served as a commander in the U.S. Public Health Service Commissioned Corps; she’s worked for a decade as a medical officer at the Food and Drug Administration (FDA) and the Office of Counterterrorism and Emergency Threats, studying, in part, vaccine effectiveness and safety; and she recently stepped aside from a position as the deputy director of the U.S. Army Traumatic Brain Injury Program in May to help start a nonprofit focused on promoting human-biology based biomedical research to eliminate animal testing and experimentation.

She’s also published a book — Our Symphony with Animals: On Health, Empathy, and Our Shared Destinies — that examines human-animal connection and how empathy and compassion towards other species enriches people’s well-being.

But there was a time in Akhtar’s life, before she found her place and purpose as a leader in the fields of animal ethics and neurology, when she was a girl wishing she could find her voice. Her savior, who helped start her transformation into the person she is today, was her grandparents’ dog, Sylvester — the first animal with whom she forged a friendship.

“My parents are from Pakistan,” Akhtar told Lady Freethinker. “I didn’t grow up around animals. We ate animals. Sylvester was the first animal I really knew, and the connection was instant.”

The bond she felt for her four-footed friend intensified one day when Akhtar came across a man she knew well physically abusing Sylvester. A close family friend was also sexually abusing her.

Akhtar had stayed silent about her abuser out of fear, as many children do. She also initially stayed quiet about witnessing Sylvester’s abuse before her outrage cracked open her courage.

Her family moved. Missing Sylvester, Akhtar asked for a dog. Her mother agreed to take in a stray cat instead.  The family then fell in love with the cat and ended up rescuing and fostering more. At one point, they had 17, Akhtar remembered fondly. 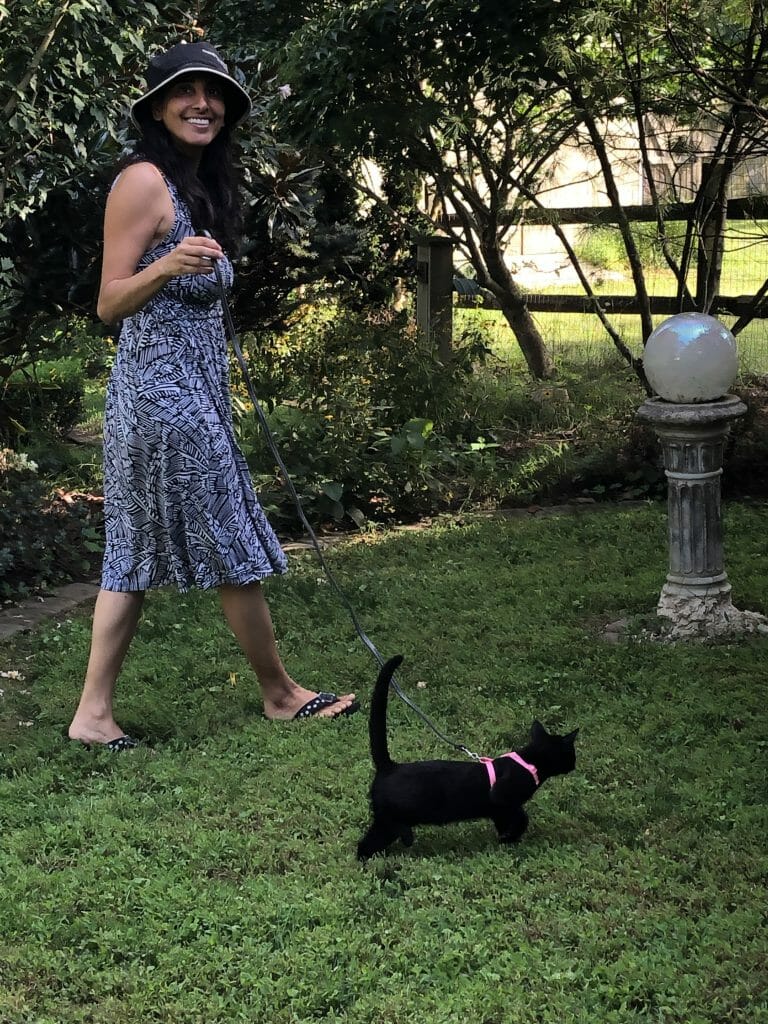 Then one day, her sister came across a story about a downed cow, published by People for the Ethical Treatment of Animals (PETA), and shared the story of animal abuse with Akhtar and her mother.

“We had never thought about who we ate,” Akhtar said. “But that night my mom came down to the dinner table and said, ‘That’s it, I’m no longer serving meat,’ and we became vegetarians.”

Akhtar became fascinated with the connections people form with animals. She started reading everything she could, including Peter Singer’s groundbreaking Animal Liberation, and started seeing connections between animal rights, women’s rights, and human rights.

High school brought a challenge when a teacher had her class dissect frogs. Akhtar refused to participate. She received a lower grade but said the trade off was worth living aligned with her conscience. As she progressed through her professional studies, she encountered other expectations to test or experiment on animals.

“I grew up worshipping scientists,” she said. “I had always wanted to be a scientist, to work in a lab. It hit me personally that the people I had grown up worshipping could do such cruel things to helpless beings.”

Meanwhile, she was watching science fail her father, who suffered from chronic neurological pain, for which there aren’t many successful treatment options. During her work with the FDA, she also watched countless other products approved through animal testing axed after failing tests on human volunteers.

“Most drugs that pass animal tests end up failing in human clinical trials,” she said. “They fail because they are found not to be safe, or not to be effective. That basically told me the system isn’t working, and there’s a drastic need to change things.”

Akhtar said that’s why she is so excited about the mission of the Center for Contemporary Sciences, a nonprofit she helped launch in May that’s dedicated to human biology-based alternatives to animal testing.

She’s ready for resistance. But she’s also ready to make a difference.

Akhtar spoke with Lady Freethinker about animal testing, the importance of finding safer, more effective alternatives to animal testing methods for biomedical research, and her hopes for the future. 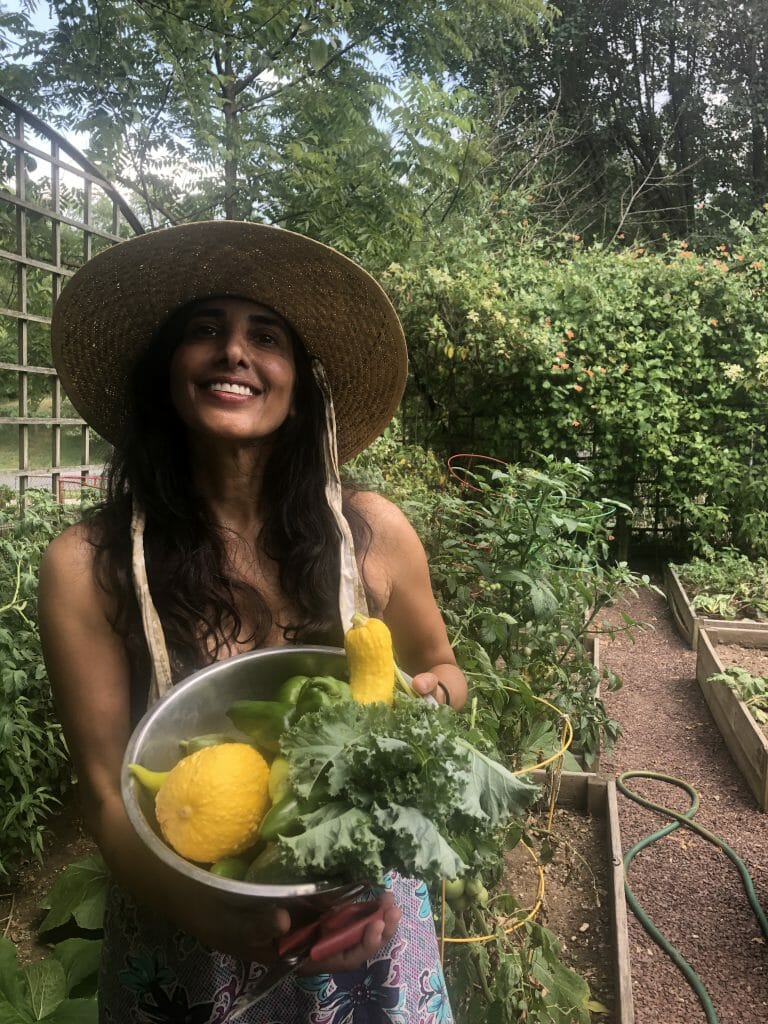 Dr. Aysha Akhtar in her veggie garden. Akhtar became a vegetarian after her family learned from PETA about the plight of a downed cow.

An Interview with Dr. Aysha Akhtar, President and CEO of Center for Contemporary Sciences

Lex Talamo (Lady Freethinker): Where is animal testing happening today? And why?

Dr. Aysha Akhtar: The majority of animals used in testing are being used for “basic research” in academic labs, funded by the National Institutes of Health. A lot of it is curiosity-driven, and it’s mind-boggling, the cruelty involved.

There is a terrible lack of transparency in the United States about how many animals are used in testing and experimentation each year. A majority of the animals, including mice and rats, aren’t counted as animals under the Animal Welfare Act.

L: Do you foresee any challenges in getting researchers, governments, and companies to accept the idea of human-biology based alternatives instead of animal testing?

A: There’s a strong culture within the biomedical research community that supports the use of animals in experimentation, even though there are numerous studies that show it’s not the best way. The FDA has admitted that animal testing is unreliable, but they continue to ask for it because that’s what they know.

There is no legal requirement for testing cosmetics in the United States. Some other countries might require it, but the companies here do have power. They could push back. But it’s to their economic advantage to just do whatever.

One of the biggest drivers of change is money. Animal testing has continued because that’s where the money has gone.

L: How will the Center for Contemporary Sciences contribute to a shift toward safer, more effective, and more compassionate biomedical research practices?

A: We have to shift funding to find opportunities for governments and investors to invest in new technology. We are working with academic centers to bring money to the technologies, and then get the technologies into the hands of the researchers.

We are also helping to train early career scientists. Students are interested in these new technologies because they don’t use animals, and they’re also more exciting.

L: What about COVID-19? How does this focus on human-biology based research relate, if at all?

A: This is a time for many reasons that is forcing us to re-evaluate things, and not just do things because it’s the way we’ve always done things. That opens the door for innovation.

There’s a desire with COVID-19 to rapidly develop a vaccine. Most vaccines take 15 to 20 years to safely develop. The fastest one I can remember took about 4 years. If we want to develop vaccines faster, and be confident they will be safer, we need the best testing possible.

Past results have shown that is not animal testing.