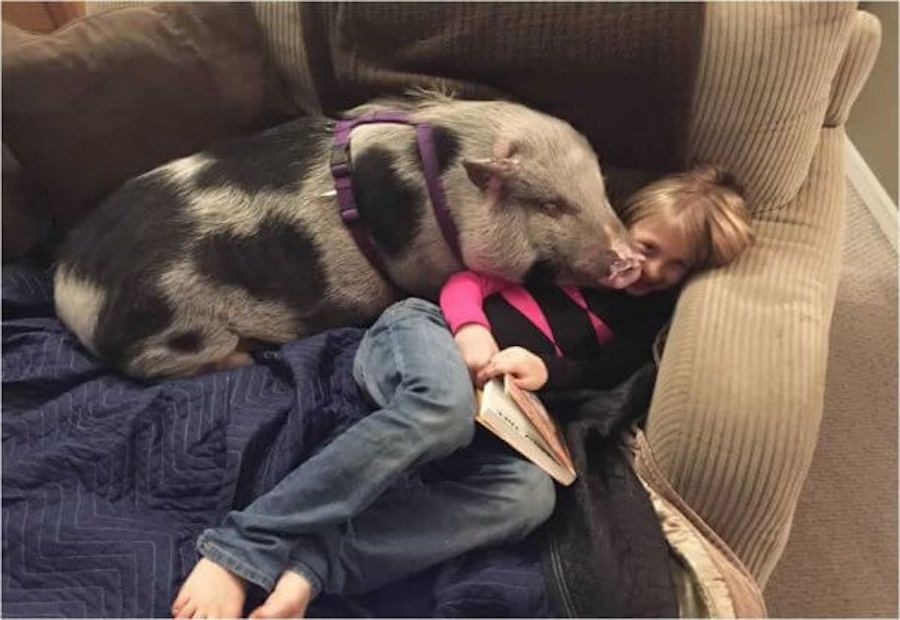 Sophi and Koa spending some quality time together, image courtesy of PETA

When rescuers found Koa, a pot-bellied pig with a tattered ear and bleeding wounds, they weren’t sure he’d survive. But with a little perseverance, a strong will to live, and support from PETA, Koa pulled through and is now living the happy life he deserves with a warm and loving family.

Koa was wandering around Lancaster, Ohio when someone spotted him and called PETA, which has a 24/7 response team. They sent out a local veterinarian and team of rescuers to search for the frightened pig. Bringing Koa in for help, however, wasn’t easy. Whenever anyone approached him, he ran away into the woods.

Although the rescuers had to search all night, the team “was committed to ensuring that Koa would not be left to suffer from his horrific attack,” said Assistant Press Coordinator for PETA Megan Wiltsie in an interview with Lady Freethinker. 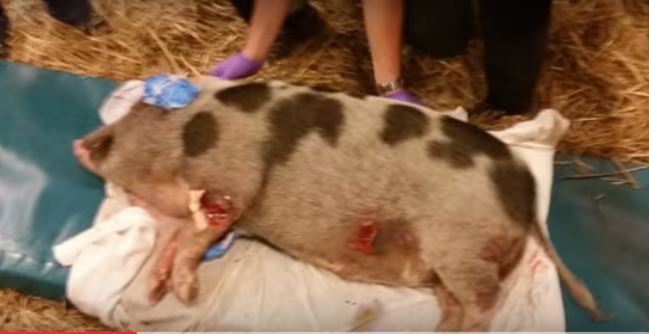 When the rescuers managed to get to Koa the next morning, he was in a dire state. He had several deep cuts — one of which was already infested with maggots — a torn ear, and an injured eye. Judging by his wounds, rescuers believe he’d been beaten with a crowbar and left to die.

Koa was rushed to the Ohio State University Veterinary Hospital and into surgery. The veterinarians had to remove one of his ears, but they were able to save his life and the damaged eye. After spending a few weeks recovering, Happy Trails Sanctuary in Ravenna, Ohio took in the little pig. 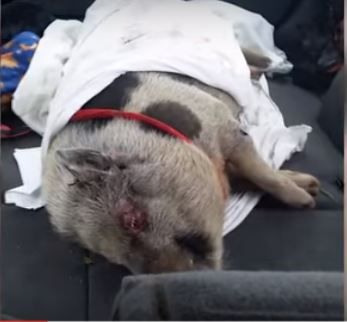 Koa recovering from his wounds, image courtesy of PETA

Things began to improve – PETA provided a grant to reimburse Happy Trails for taking care of Koa, and a family from Medina, Ohio heard about the rescue and came to see him. They couldn’t resist the cute and cuddly pot-belly.

“Koa was an old soul who needed a loving home and a family who could help him recover,” Wiltsie explained. The family from Medina “fit the bill perfectly” and adopted him. They even gave him the name Koa, which means warrior in Hawaiian. 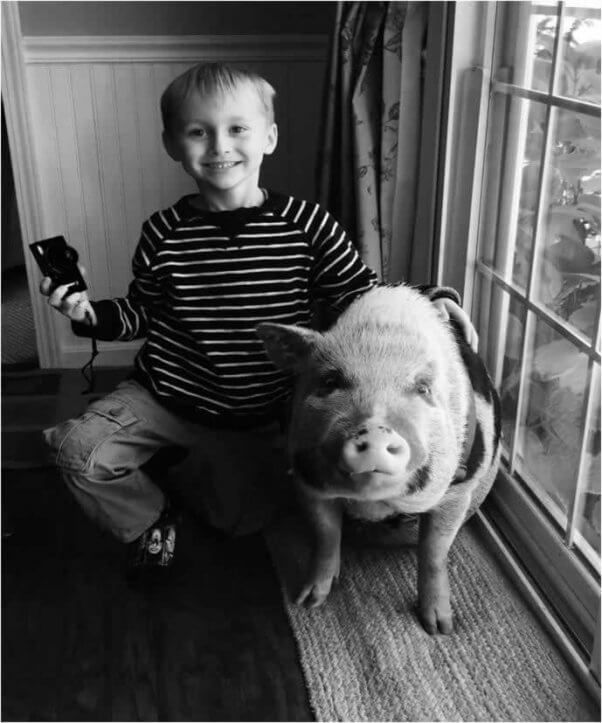 Koa begins a happy new life with a loving family

While he’s clearly a fighter, Koa’s life now is an enormous contrast to what came before. Instead of abuse and fear, he’s found love and inclusion. He’s free to explore, play, and enjoy life to its fullest.

“Every animal deserves kindness, and Koa reminds us that pigs have the same capacity to suffer and experience joy as any other animal,” Wiltsie said.

Koa loves playing outside, rolling in the mud, running around or just snuggling with his new family’s two children, Sophie and Miles, and stealing bites of their PB&J sandwiches.

Sadly, Koa is one of many animals who suffer abuse

Although Koa’s story has a happy ending, it also highlights a much larger issue. The American Society for the Prevention of Cruelty to Animals estimates that an animal is abused every minute, and the FBI just launched a national database of animal cruelty.

“Animal abuse is a community concern,” Wiltsie reiterated. “Many studies show that people who abuse animals are often repeat offenders who pose a risk to all animals, including human beings.”

In fact, animal abuse is often tied to other types of violence. According to the American Humane Association, 13% of intentional animal abuse cases involve domestic violence, and one study found that 70 percent of animal abusers also have a record of other crimes.

“That’s why it’s so essential to report cruelty to animals to the authorities the moment that it’s suspected,” said Wiltsie. She recommends that communities and schools offer animal care programs early on, to help “stop abuse before it begins.”