32 Animal Abuse Issues Every Compassionate Person Should Know About

Around the world, there are countless industries and events in which animals are clearly abused, or even tortured. But there are also many situations in which we don’t even realize animals are bring harmed. The wool industry is an example of the latter. Until you see sheep after being sheared, you may think that those wooly coats are humanely shaved off, like a trim at the local barber shop. But the truth is far more sordid. The dairy industry is another example — sad to say, the “happy cow” is a myth. Anyone who cares about animals should know about — and act on — the animal abuse issues listed here:

Factory farms are atrocious places where animals are treated like objects that become food. Pigs and hens are stuffed into tiny cages. Cows are impregnated via “rape racks.” Calves are stolen from moms as soon as they are born — in some instances, mother cows have attempted to hide their babies knowing that they will be taken away.

Calves are trapped in tiny stalls where they can’t move so their flesh will be soft when they are slaughtered to become veal. Male chicks are ground up alive because they don’t lay eggs. Injured cows are milked continuously and then slaughtered for food.  Beyond the dreadful conditions and terrible handling, undercover videos show workers kicking and hitting animals. One video revealed a worker jumping on helpless piglets, crushing them.

Foxes, minks, chinchillas — and even wolves, dogs, and cats — are kept in tiny cages on fur farms. They never get to walk on the ground, aren’t fed well, often don’t have water, and receive no medical care. They engage in self-mutilation because they are miserable. Many are skinned alive. Others are anally or orally electrocuted, strangled, gassed, beaten, or their necks are broken. Even a little bit of fur trim is the product of agonizing cruelty.

For angora wool, the wool is often ripped from angora rabbits’ bodies as they scream in agony.

Wool sheep often undergo the painful process of mulesing, which involves restraining sheep and cutting huge chunks of their skin. No painkillers are used. Mulling is performed to help prevent fly infestation, called “flystrike.” Flies lay eggs in the folds of their skin, and their maggots can eat the sheep alive. But sheep who are mulesed can still be flystruck. It’s not effective and it is excruciatingly painful.

Photos of sheep with bloody skin testify that the wool industry is laden with pain and suffering. 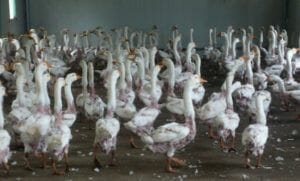 Geese are plucked until their bodies are bloody. Down alternatives are the compassionate choice for pillows, comforters and coats.

Silk may SEEM lovely and soft but it is derived from silkworm torture. The silkworms are boiled alive; silk-makers then remove their cocoons after killing the silk worm inside. Then the strands are woven into textiles.

Undercover photos and videos show cats with metal contraptions bolted to their skulls. Their brains are  sometimes exposed so scientists can study them. Researchers do terrible things to monkeys, dogs, and other animals. The Draize test is performed on rabbits: A group of rabbits are secured in a circular holder that rotates. Researchers drip shampoo and other liquids into their eyes causing terrible pain and blindness.

Bear bile is used for medicine in the Orient. Bears are kept tied up and unable to move while the bile from their gallbladder is drained from their bodies and sold for supposedly “medicinal” purposes

Keratin for hair straightening is made of ground-up horns, hooves, feathers, quills, and hair of various animals. Red dye used for lipstick and blush is the result of crushing beetles (female cochineal insect). PETA says 70,000 are killed to make one pound of the dye.

Frighteningly, people enjoy cheering while watching multiple dogs attack a terrified, tethered bear whose teeth have been broken, claws have been removed, and muzzle is pierced with nose rings.This brutal “entertainment” must end.

Yet another way to enslave bears and to inflict pain on them is bear dancing. They are dressed up in outfits and forced to dance, stand up, lay down, and generally humiliate themselves.

Bullfighting had been socially acceptable since 2,000 BC, but it is pure torture for the bulls forced to publicly fight and get speared in a bloody death. Recently, animal activists have managed to end bullfighting in some towns and continue to battle against this barbaric and treacherous “sport.”

Running of the Bulls is supposed to be a must-do for brave tourists. But a Spanish group called Torture Is Not Culture has released a graphic and heartbreaking video of the aftermath of the Running of the Bulls in Pamplona. The bulls are forced to run and then stabbed and speared by matadors. Ultimately, the matadors sever the bull’s spine with a dagger. Some of the bulls drown in their own blood before their spine is severed. Some of them are still alive and their bodies are dragged to slaughter.

Greyhound advocates have succeeded in closing down many dog racing tracks, and greyhound rescue groups have placed some dogs in loving homes. Unfortunately, the majority of dogs aren’t adopted out and enjoying retirement. The dogs are drugged, caged twenty-three hours a day, and treated like commodities. They are often killed for selective breeding. They start racing at a year and a half and many don’t live to the retirement ages of four or five.

Horse racing is similar to dog racing. The horses are given steroids, lead an unnatural life of confinement, and injuries and retirement often result in them being euthanized.

Zoos are a fun place for children to visit but are miserable “homes” for animals. Some animals are stolen from their families. Others are bred over and over. Animals may be killed simply because there are too many of a particular species in a zoo. In 2016, Harambe the gorilla was murdered because a child wandered into his enclosure. Sadly, he would not have been killed had he not been a prisoner at the zoo.

The cruelest show on earth, indeed. Whipping elephants and chaining baby elephants to “break” them (after stealing them from their moms) are among the dreadful things done to pachyderms. Lions, tigers, and the rest of circus animals suffer similar fates.

Dogs aren’t the only animals that misguided people enjoy watching battle to their deaths. Horses, camels, roosters, orangutans, and others are forced into blood sports where they are tortured to make them aggressive.

These are mostly in the Philippines and Asia. Some dogs are bred, but many are stolen from loving families, still wearing their collars as they’re beaten to death. Even those on farms are not properly cared for. Deprived of food and water, they live in fear and misery.

Exotic animals used in television and film are typically stolen from their families in the wild. They are often trained using fear and violence, and lead a life of solitude and suffering.

Thankfully, awareness of the horrors of Seaworld has increased and activists are encouraging people to boycott the whale (and other sea creatures) torturers. When a musical group signs up to play there, petitions are circulated online asking them cancel the show. The film Blackfish has shown the world that sea mammals are mistreated at Seaworld and other marine parks.

Shark fins are used for soup, and are caught in an incredibly cruel manner. Fishermen sometimes cut off the fins of a shark and then toss the shark back into the water. The sharks are unable to swim and drop to the floor of the ocean to die.

Pig wrestling is a social activity where people chase, corner, shove, torment, and toss around innocent pigs. For some reason the human participants think this is an acceptable way to treat a living creature. The pigs squeal in fear as the wrestlers laugh with delight. Then the pigs, some injured, are slaughtered.

Sadly, modern cowboys sate their thirst for machismo by roping, dragging, injuring, and psychologically terrorizing animals. Peaceful animals are badgered into fighting and resisting attempts to ride or rope them, sometimes killing the animals.

Violent storms, extreme heat or cold, sadistic people, wild animals, fires, infestation of fleas or ticks — all are potential fatalities to chained animals who can not protect or defend themselves.

2.7 billion companion animals are killed annually in the United States because there’s nowhere to put them. Simply catching the shelter’s cold is a death sentence. The cold is very contagious yet easy to cure. Being older, frightened, or reactive because of fear are reasons that innocent, homeless animals are murdered.

Live dissection is unimaginable pain and torture for its victims. Computer models are effective research tools, yet innocent animals are bred to be cut and studied while alive.

Believe it or not, bestiality is still not banned in many places – including 13 states in the U.S. Bestiality is yet another painful and unnecessary violation of innocent animals.

Yes, in 2016 people still perform animal sacrifice. And the United States Supreme Court has deemed sacrifice for religious purposes perfectly legal. Perhaps we’re not quite so civilized as we think.

Trophy hunting is stalking and murdering animals for “fun,” or by people who claim that the best way to celebrate the wonder and beauty of an animal is to kill it and mount it on the wall. They are under the impression that they are intellectually and physically superior to animals that they can slay. They don’t acknowledge that the “game” is not challenging because the intended victims are not aware that they are “playing,” and are not armed. The senseless murder of Cecil the lion brought trophy hunting to the public’s attention. Hopefully his murder will act as a catalyst to enact legislation banning trophy hunting for good.

Being hooked is painful for fish. Commercial fishers slam fish on the floor of their ships after catching them. The fish can’t breathe out of the water and are physically abused but often still alive. Catching and releasing isn’t as peaceful as some think because the fish suffer greatly. Would you want a hook through your jaw?

Many dogs are injured and some die during the Iditarod.

The moms and dads of adorable puppies/kittens are matted, ill, missing an eye, and other sad things. The female breeders are perpetually pregnant and then killed when they can no longer reproduce. The animals reside in cramped cages without food and water and in their own excrement. They never receive attention or get to run on the ground. Their medical issues are not addressed.

Tragically, there are many more ways that people unnecessarily hurt animals. All of these horrifying activities and industries must be eliminated. Animal activists are making progress in many arenas, but there is a long way to go until animals are free from the viciousness of human exploitation.