PETITION UPDATE:  Officials Say Rocky the Coyote Won’t Move To A Sanctuary, But The Fight Continues 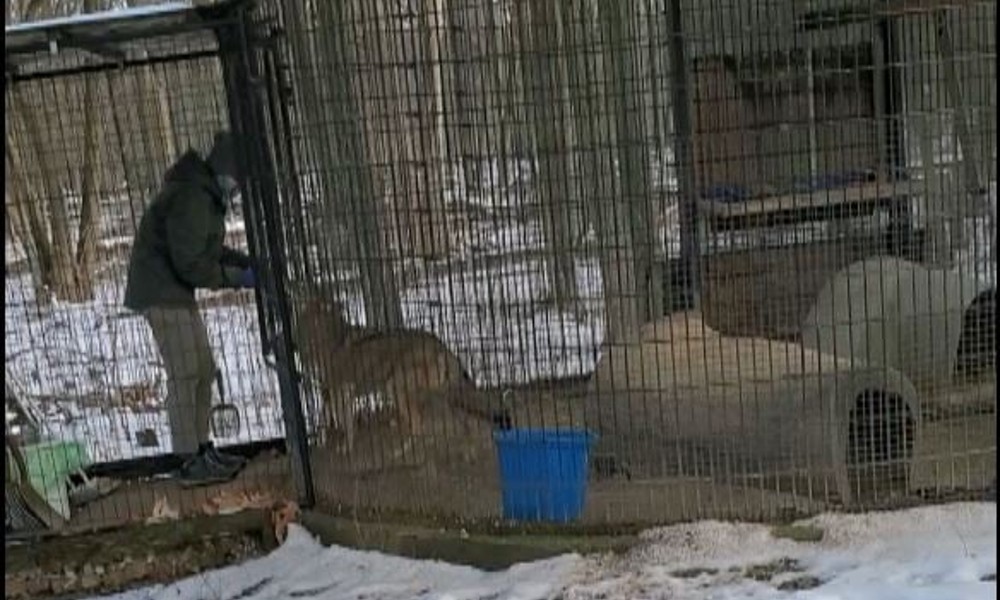 County staff have ruled that a wild coyote held captive in a 266-square-foot metal cage in Illinois won’t be heading to a sanctuary – but animal welfare advocates said the fight is not yet over.

Rocky, a coyote torn from the wild as a pup when passerby mistook him for an abandoned puppy, has been living at the River Trail Nature Center in Northbrook since 2018 and has become the center of controversy in recent months.

The Forest Preserves of Cook County, which runs the nature center, says Rocky is imprinted on humans and an ambassador animal. Local animal welfare organizations and activists, who have documented Rocky pacing on numerous occasions, say keeping him caged in such a small enclosure, without access to others of his own kind, is cruel and inhumane.

The Forest Preserves recently announced Rocky will remain as a sole coyote at the nature center but added that a new enclosure – to measure between 2,000 and 2,500 square feet– is in the works, with anticipated completion this year.

The announcement follows an internal audit, in which one of the veterinarians consulted advised that Rocky’s enclosure should be at least 5,000 square feet and that he would benefit from having a coyote companion.

Local animal lovers who have long advocated for Rocky’s release to the Wild Animal Sanctuary in Colorado – including the Chicago Alliance for Animals (CAA) and Northbrook resident Nicole Milan – said building a bigger cage is not the answer and that keeping Rocky captive and alone also is inhumane.

“You put an animal in a cage, they’re not happy,” CAA’s Executive Director Jodie Wiederkehr told local news. “We will not stop advocating for Rocky until they do the humane thing and allow this very isolated, yet social animal to finally be on his way to a much more appropriate habitat and a much happier life.”

The veterinarians consulted for the audit were Edgar Garrett, a professor at the University of Illinois in Urbana-Champaign, who specializes in livestock, and Alison Kubala of the Veterinary Emergency Group in Chicago, who has worked with gorillas, elephants, and large carnivores.

Kubala’s evaluation in the audit noted Rocky should have a larger enclosure – citing a 5,000 square foot guideline from the Association of Zoos and Aquariums — and also encouraged space and opportunity for the coyote to display natural coyote behaviors, such as hunting and exploring.

The Forest Preserves instead cited the livestock expert who said Rocky’s enclosure was “adequate,” according to the report.

Milan pointed to discrepancies in the report during a recent speech to the Forest Preserves Board of Commissioners, questioning why wild canid specialists weren’t the ones to weigh in, noting the proposed cage expansion was less than half the space advised according to best practices for captive coyotes, and challenging the current conservation messaging by the nature center’s staff.

“The study demonstrates serious and disturbing failures in running the program,” Milan also told Lady Freethinker. “Keepers are saying Rocky is habituated, he sees people as his family, he cannot hunt, he sees the enclosure as his home and he doesn’t feel safe outside of it so we give him mental exercise instead of physical exercise. All incorrect information! He is not being treated like the wild animal he is.”

She added, “This ambassador program is not only teaching incorrect information, but it is selfish animal abuse to keep animals for the employees’ viewing pleasure.”

The audit also noted the nature center’s offered educational programming needed to make clear to public visitors the importance of staying away from wild coyotes.

We thank everyone who signed our petition on Rocky’s behalf and to the local animal activists who are continuing to advocate for Rocky’s well-being and maximum freedom to be the wild animal he is. We’ll keep following his journey, and urge you to sign our petition if you haven’t already.