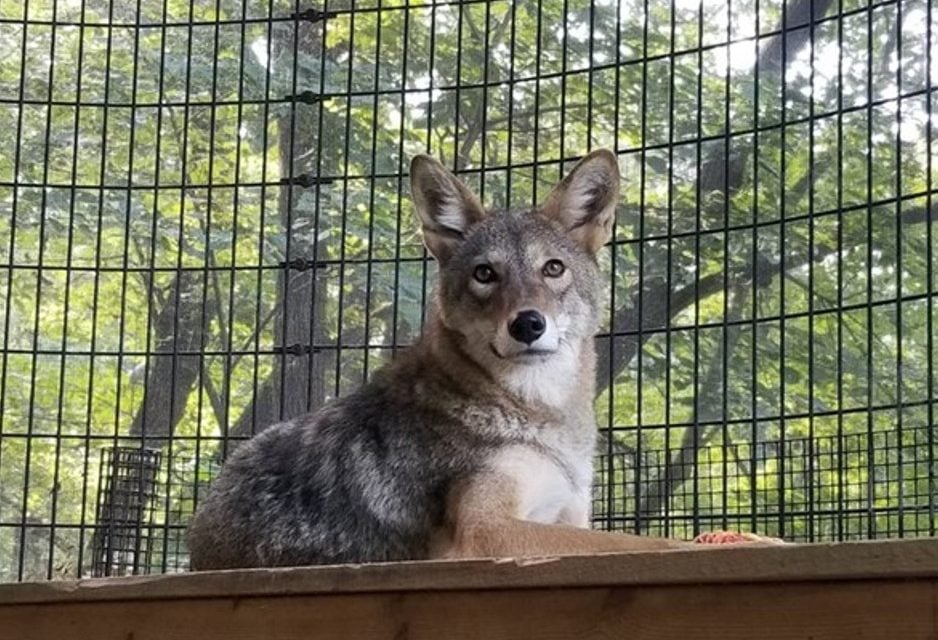 UPDATE (9/13/2022): Cook County officials have ruled that Rocky will remain at the nature center, with a slightly larger cage in construction. You can read our full update here. We’ll keep watching this tragic case. —Lady Freethinker Staff

Rocky the captive coyote has spent the past four years inside a 10-foot-by-22-foot metal enclosure outside the River Trail Nature Center in Northbrook, Illinois.  He never sees other coyotes, although human visitors will come to peer at him from behind a low fence a short distance away. Visitors have video-recorded him pacing back and forth, as well as obeying a person who commands him to “Sit” before feeding him from a metal bowl.

The wild coyote – who was mistaken for an abandoned puppy at a few weeks old, removed from the wild, and socialized to be a “pet” before an animal shelter in Tennessee realized the mistake – is now also the center of controversy.

Dozens of concerned members of the public in the area have protested his confinement, alleging that Rocky’s enclosure is inadequate and that he’s pacing, losing fur, and on anti-anxiety medication for chronic stress. They also say he is not happy and deserves to be relocated to a sanctuary where he can be with others of his own kind.

An official with the Forest Preserve of Cook County, the agency that oversees the nature center, said Rocky’s enclosure complies with requirements set by the U.S. Department of Agriculture (which sets minimum standards for space) and that Rocky is healthy, receives top-notch veterinary care, and is content with his human “pack” of the center’s staff. He added that anti-anxiety medication is reserved for veterinarian visits and events like Fourth of July fireworks, and an isolated incident of fur loss that occurred in January 2020 was the result of an environmental allergy with “no indication that it was associated with stress.”

Veterinarians also have issued conflicting accounts during recent Forest Preserve meetings. The veterinarian who has treated Rocky since he arrived in Illinois testified that “he does not need other coyotes to be happy,” that he is “absolutely not in social isolation” because of his human caretakers, and that “he is provided all he needs” while serving as an important “ambassador” animal to educate the public.

Three other veterinarians, who cited extensive experience specific to captive coyotes and viewed video recordings but had not been to the nature center, reported during public comment during a Jan. 11 commission meeting that they were concerned about the size of Rocky’s enclosure, that he didn’t appear to have any structures in place to retreat from visitors if stressed, that he should have access to other coyotes as solitary coyotes are rare in the wild, and agreed that he appeared stressed and should be relocated.

“There is no educational value to having children see an animal completely stressed in a cage,” one said. “In my mind, that just educates them that it’s okay, when it is not.”

It’s clear that everyone involved with Rocky cares about him. It’s also clear that a once-in-a-lifetime opportunity is opening for this innocent animal, whose life was disrupted through no fault of his own, which could allow him – for the first time in his life – to become more of what he actually is: A wild coyote.

Recently, the Wild Animal Sanctuary (WAS) –  an almost 800-acre nonprofit sanctuary in Colorado that specializes in rescued carnivores, including coyotes formerly raised in captivity– offered to transport Rocky to their property and give him a permanent home at no charge.

In a letter to county commissioners, WAS Executive Director Pat Craig said fears that Rocky wouldn’t be able to acclimate to other coyotes due to his circumstances, or that removing him from his human caretakers would somehow harm him, were unfounded.

Transformation happens in captive wild animals when they are finally given a chance to be free – “or at least given the next best thing” at a sanctuary, with room to roam and otherwise express more natural behaviors, Craig wrote.

Rocky would, too – if given that chance, he added.

“Our facility has nearly a dozen coyotes in its care, and most of these previously lived in similar situations such as Rocky does now,” Craig wrote. “It truly is in Rocky’s best interest to be allowed to live far more freely and with others of his own kind.”

While the Forest Preserve’s mission encompasses educating people about wildlife in a natural state, that mission says nothing about keeping healthy,  uninjured, biologically wild animals captive.

The Forest Preserve told Lady Freethinker that they “are always willing to consider how we operate, based on the latest science and the facts.” Cook County Commissioner Scott Britton, whose jurisdiction covers the nature center’s location, also told news that he would be “looking to do what’s best for this coyote.”

That absolutely requires a larger enclosure for Rocky and a chance to live with his own kind. While Rocky can’t be released to the wild, re-location to the Wild Animal Sanctuary would allow him to roam, run, den, socialize with other coyotes if he so chooses, and otherwise live the life he deserves as a wild animal without putting his survival at risk.

Sign our petition urging Cook County Commissioners and the Forest Preserves of Cook County to re-locate Rocky to a sanctuary where he can roam and be with his own kind. It’s the very least that this innocent animal deserves.