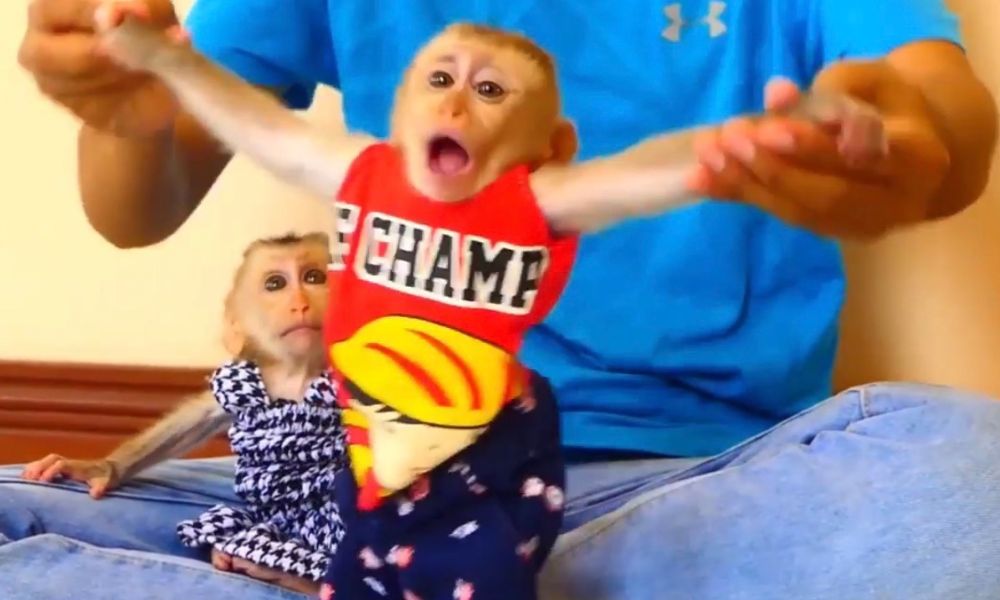 Wild animals — including tiger cubs and endangered macaques —  increasingly are being kept as ‘pets’ and subjected to heinous acts of cruelty to increase their owners’ online popularity on social media platforms, a new report from the Social Media Animal Cruelty Coalition (SMACC) reveals.

SMACC, a network of 13 well-reputed animal protection organizations — including Lady Freethinker — formed in 2021 after members noted a concerning spike in online animal cruelty content — defined by the organization as “anything that has been posted on a social media platform by an individual, organization, or business that depicts animal cruelty or suffering for any reason apart from valid campaigning, journalistic, or educational purposes.”

The “Wild Animal ‘Pets’ On Social Media: A Vicious Cycle of Suffering” report focuses on just one of the vicious trends — cruelty committed to wild animals kept as ‘pets’ by both owners who deliberately torture them or who cause serious suffering through ignorance of what wild animals need to thrive.

SMACC’s team found at least 840 videos of wild animals, covering 97 species, kept as “pets” from September 2021 to September 2022. The videos collectively had been viewed on social media platforms Facebook, YouTube, Instagram, TikTok, and Twitter more than 11 billion times as of the report’s release in November, SMACC noted.

Vulnerable and endangered macaques made up 76 percent of the identified animals, while wild felids such as tiger cubs made up 8 percent. Reptiles and amphibians also were among the top animals exploited. 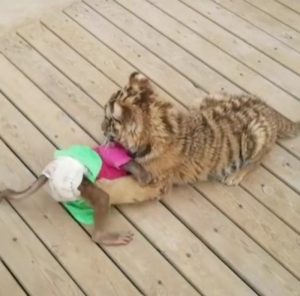 “Videos of people dressing up baby monkeys, walking tigers on chains, and bathing otters in bathtubs are incredibly damaging,” said LFT Founder Nina Jackel. “These posts normalize animal abuse, and while they may appear ‘cute’ or harmless on the surface, the reality for these animals when the camera is off is much darker. These animals are suffering, plain and simple.”

SMACC also notes that at no point in their investigation was cruelty content exhausted — meaning that their findings likely “only scratch the surface of a much larger problem.”

Nearly a quarter of the animals — around 22 percent — endured acts of deliberate physical abuse — including drowning, burning, beating and sexual abuse of animals – and psychological torture.

SMACC’s researchers also noted about 12 percent of animals being forced to perform as “entertainers” in demeaning and damaging acts. Depriving mothers of their babies and filming their distress and rough handling of animals also were serious issues in the videos documented by the researchers.

Specific examples of inhumane treatment included a tiger in a small cage circled by a dog in the same enclosure, a man who tried to pet, and then beat, a lion who tried to bite him, an alligator on a lead in a shopping mall, and a woman bringing her ‘pet’ tiger to a gym with her, according to SMACC. Other videos showed lion cubs in diapers, bushbabies wearing baby clothes, and infant monkeys fed what appears to be bottled milk, according to SMACC researchers.

Social media users who viewed the posts shared the footage, commented on how “cute” the animals were and asked how they could get one of the wild animals for themselves — a horrifying reaction that’s fueling the wild animal trade, including by traffickers who often brutally separate the desired infants from their wild families so they can sell the babies as “pets,”  SMACC noted.

“Social media has become a key driver in the trade in wild animals, with both legal and illegal trade taking place online and in communication apps,” SMACC wrote in the report. “Research has shown how some species are seeing a decline in population numbers in the wild, in part due to the demand for the pet trade.”

Wild animals kept as pets almost always suffer from inadequate environments by owners who don’t understand their behavior or their needs, according to SMACC.

Researchers documented numerous videos of lorises, South Asian primates, being tickled and raising their arms — behavior that the owners portrayed as “playful” but that actually is a defensive reaction that shows the tiny primates are afraid.

Lorises also often have their teeth cut out with nail clippers, wire cutters, or pliers without any painkillers before being sold, SMACC noted. 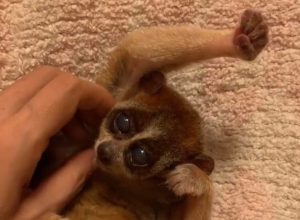 Unnatural home environments and inadequate care means about 75 percent of wild animals purchased as “pets” die within their first year, according to SMACC.

SMACC reported all the documented cruelty videos to the platforms via their reporting systems, but none of the videos had been removed as of the report’s publication in mid-November, according to SMACC.

“These platforms have a social and ethical responsibility to do better,” SMACC wrote. “What our report shows is that their inaction leads to a vicious cycle of cruelty for wild animals kept as pets, and we are urging them to stop avoiding their responsibilities and take action.”

The coalition has reached out for conversations with the platforms’ parent companies, but so far has only heard from Meta, which hosts Facebook and Instagram, and ByteDance, which hosts TikTok.

The Coalition’s requests for improvement include asking the platforms for the following: to adopt a standard definition of animal cruelty across all social media platforms, in consultation with animal welfare experts; to ensure their policies expressly prohibit cruelty; to implement robust monitoring systems to detect and quickly remove cruelty content; and to stop paying channel and video owners for animal cruelty content.

“Most people watching on social media do not see the vast amount of cruelty that has been perpetrated against animals for that 30 second video,” said SMACC Lead Coordinator Nicola O’Brien. “As well as the unsuitability of a human home for any wild animal causing physical and psychological damage, obtaining these animals supports a dangerous and often illegal worldwide trade, threatening animal welfare and endangered species protection.”

SMACC also is asking online users to do their part by following the “Five Steps to Stop Online Cruelty,” such as always reporting any witnessed, possible animal cruelty to the platforms — even if you don’t receive a response. 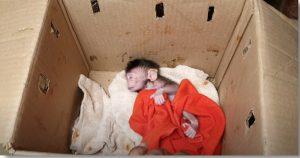 “We know that receiving no or disappointing feedback from the platforms can be very disheartening and that faced with their apparent lack of action, one might be tempted to stop reporting cruelty content directly through their reporting system,” SMACC wrote.  “However, if individual reports are not enough to make a change, continuous and united global efforts will contribute to moving the situation in the right direction.”

The newest report builds on the coalition’s inaugural report about animal cruelty on social media and a recent “Teasing as Torture” report, which highlights how acts against animals that may appear harmless actually cause significant distress to the animals involved.

Here’s more information on what you can do to help these suffering animals, according to SMACC.

Help animals who are being exploited and abused on social media — sign our petition urging YouTube to do better at stopping videos that show cruelty to animals from spreading on their platform, and to remove all videos that show animal abuse!