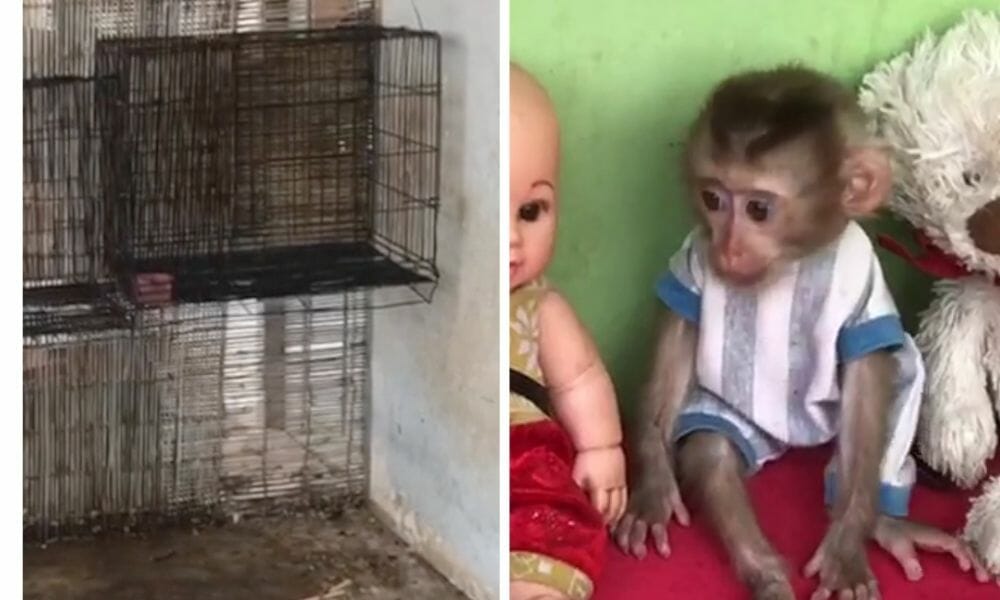 Baby monkeys are being cruelly captured from the wild in Cambodia, illegally sold as “pets,” and forced to perform unnatural acts while dressed in doll-like costumes for social media views by their seemingly loving owners — who during “off camera” hours keep the innocent animals in barren wire cages, feed them junk food, and deprive them of the ability to engage in natural behaviors, reveals an investigation by Lady Freethinker and Action for Primates. 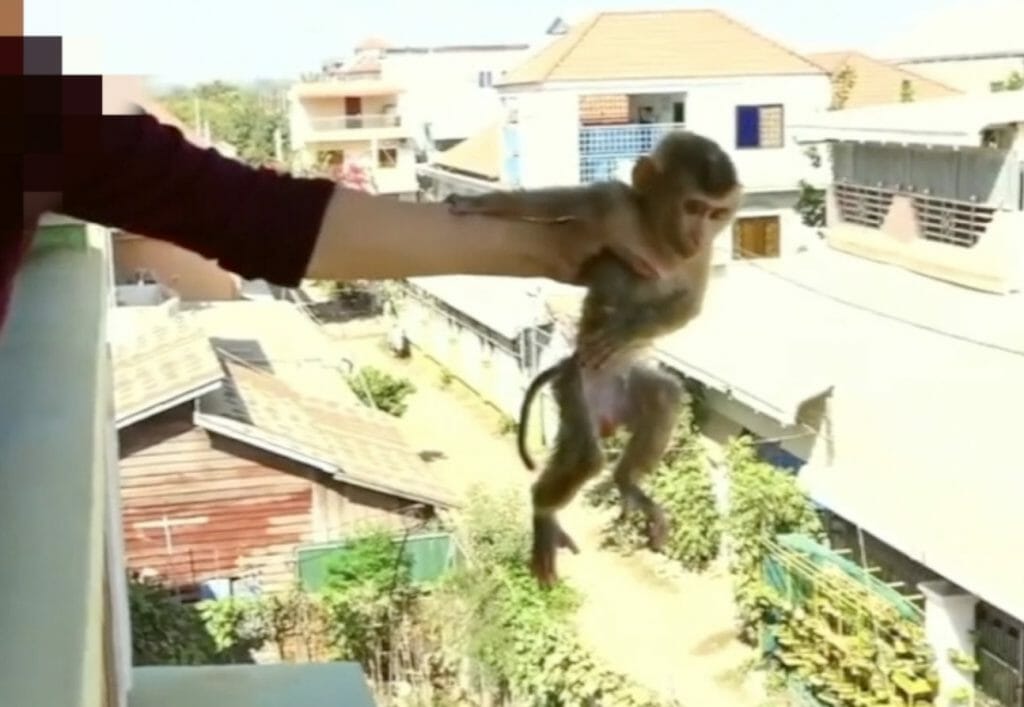 Our investigator met with several individuals in Cambodia uploading videos of their “pet” macaques to YouTube, Facebook and other social media platforms. The videos showed illegally-owned infant pig-tailed and long-tailed macaques wearing colorful dresses and pants suits, playing with toys, standing on their hind legs on command, and performing other stunts while their owners smiled, talked softly to them, and laughed.

While these videos might seem “cute” or harmless – they are not.

At one site, our investigator documented five young monkeys kept in a wire cage with a wire floor without any enrichment or platforms. The monkeys also were witnessed sucking their fingers, a clear coping mechanism when faced with stress, separation, or loss, according to experts. 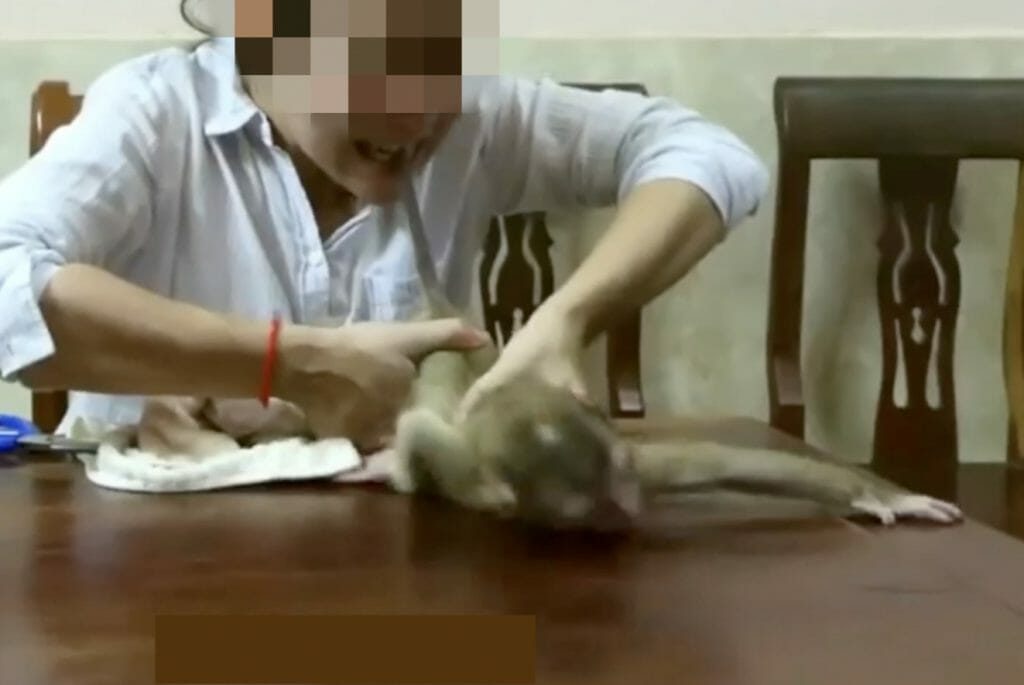 Macaques at another site also were kept in a barren wire cage in a filthy area of the residence, with the owner telling the investigator that they were fed milk, fruit, jelly, and candy.

Sometimes, the online videos even show cruelty outright.  One channel we investigated had videos with deplorable methods of “discipline”  – including hanging a macaque over a balcony and threatening to drop him, biting macaques on the tail and feet, hitting a macaque in the face and knocking over a macaque.

Nor were these video posters alone; we documented numerous intentional acts of cruelty by other posters from Cambodia, including forced bipedal walking, endless bathing (which can compromise the health of macaques’ skin), wrapping of macaques’ hands and feet to prevent visible finger sucking (which can also interfere with their balance and ability to grab things), and forced waiting for food placed just in front of them. 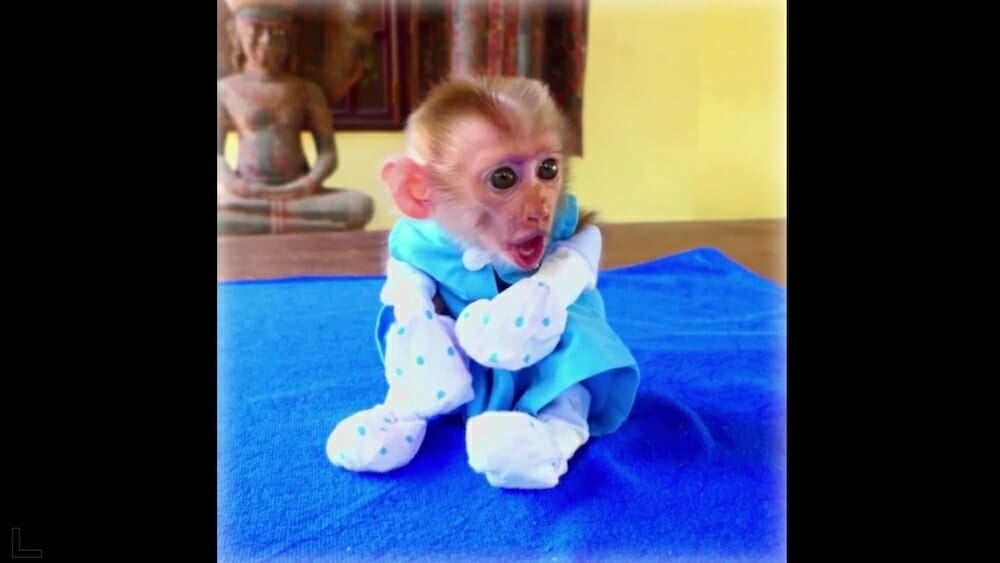 Some of the additional videos also showed people touching or focusing their cameras on the macaques’ genitals.

Macaques are incredibly intelligent, social, wild animals who need space to roam and do best in their family units. The illegal “pet” trade in Cambodia not only includes traffickers who rip these innocent infants from the wild – which often includes injuring or killing their mothers or family members who rush to the babies’ aid – but also delivering them to people who do not realize that it is impossible to provide in captivity what a wild monkey needs in order to survive and thrive – which is why they should not be kept as “pets.”

Keeping these incredible animals captive in cages, depriving them of their mothers and their freedom, dressing them like human children, and forcing them to perform unnatural stunts for social media views is cruel and inhumane – and it’s also dangerous.

Infant macaques in captivity quickly outgrow their “cute” phase and become aggressive and unpredictable – with news abounding with injuries caused to their human caretakers, as was the case of a 71-year-old Cambodian man who was hospitalized after a 4-year-old monkey he had raised as an infant attacked and left him with serious bite wounds.

These unlawful acts are clearly documented, leaving behind a trail of evidence that’s easy to follow. It’s time to stop the cruel and illegal exploitation of these innocent animals for social media views and profit.

Sign our petition urging Cambodian officials to crack down on illegal pet ownership of macaques and people who subject monkeys to cruelty and abuse, confiscate any illegally held captive monkeys, and ensure they are sent to a reputable sanctuary where they can live the rest of their lives in peace.

Then, please take a moment to email the Cambodian Ambassador in
your own country and tell them you’d like to see an end to illegal macaque ownership, with animals confiscated and relocated to a reputable sanctuary. You can find your ambassador here: https://www.mfaic.gov.kh/EmbassyCambodiaMissionAbroad