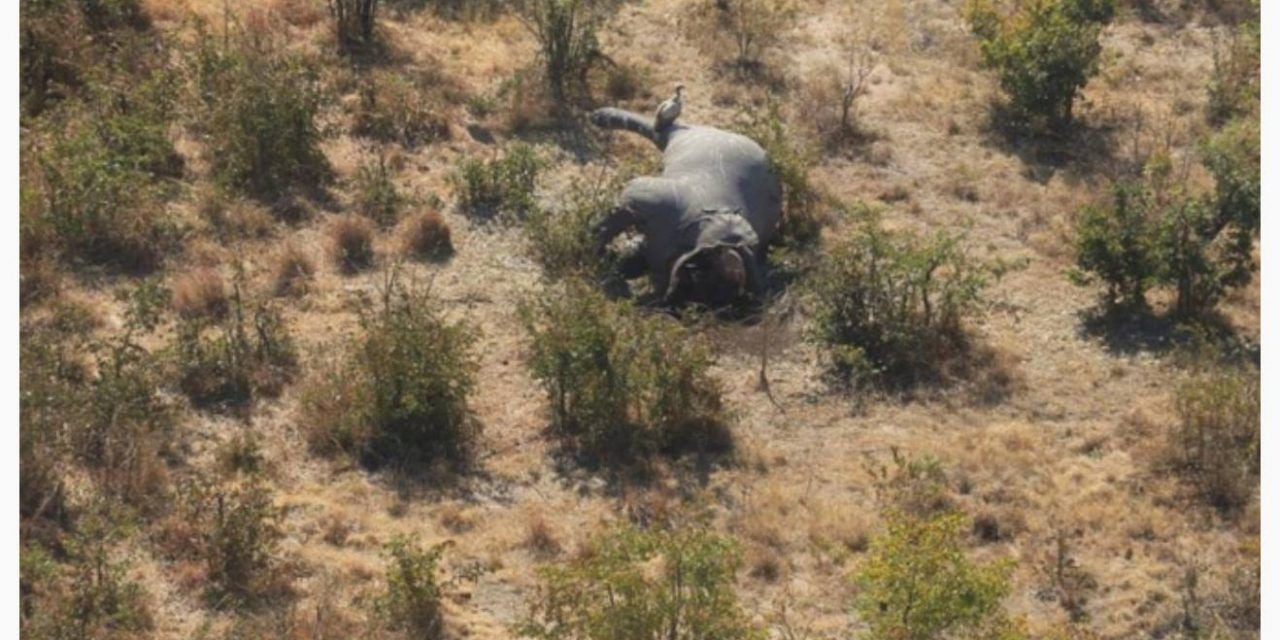 Picture courtesy of Elephants Without Borders.

Recent reports from nonprofit Elephants Without Borders, contracted by the Botswana government to conduct an aerial survey of elephants and wildlife, show a startling jump in elephant poaching. In the course of the survey, which only began in July, they’ve already found nearly 90 elephant carcasses, many of which are believed to be poached.

“Today we counted 48 elephant carcasses,” Elephants Without Borders founder and elephant biologist, Dr. Michael Chase, wrote in a report for Conservation Trust on August 3rd, adding that five of the carcasses were killed recently.

“All carcasses [are] presumed to be poached, because all of them had their skulls chopped to remove their tusks,” he said. “Poachers tried to hide their crimes by concealing the mounds of rotting flesh with drying bushes. Certainly, we flew over one of Africa’s worst poaching hotspots today.”

For Dr. Chase, who played a major role as the primary researcher in the massive Great Elephant Census in 2015, seeing so many dead elephants in Botswana was striking.

He said that he had “not seen so many dead elephants anywhere else in Africa. The varying classification and age of carcasses is indicative of a poaching frenzy which has been ongoing in the same area for a long time.”

In total, 87 carcasses have been found so far around the Okavango Delta wildlife sanctuary. The aerial survey should be completed by September 30th and may uncover even more incidents of poaching.

The story was quickly picked up by major media outlets like the BBC and The Guardian, drawing international attention.

In response to the reports, the permanent secretary in the Ministry of Environment, Natural Resources Conservation and Tourism, Thato Y. Raphaka, issued a statement on behalf of Botswana saying that “At no point in the last months or recently were 87 or 90 elephants killed in one incident in any place in Botswana.”

According to the government’s statement, only 53 elephant carcasses have been found.

“The majority were not poached but rather died from natural causes and retaliatory killings as a result of human and wildlife conflicts,” Raphaka argued.

Dr. Chase would likely disagree with the government’s account.

“We have exhausted our resources on helicopter time, so to anyone who doesn’t believe in the scale of elephant poaching the survey team is reporting, they can pay for the helicopter charter and I’ll fly with them to the carcasses, so they can wake-up, come down from their ivory tower, smell the carcass and see what we are bearing witness to…faceless rotting elephants!” He exclaimed.

These elephant deaths come just as Botswana has begun to reduce efforts that have, in the past, discouraged poaching and prevented hunting.

In 2013, Botswana began a “shoot-to-kill” policy to deter poaching. With fewer poaching incidents compared to neighboring countries, several academics argued that not only was this an effective policy, but one South Africa should adopt. However, in May of this year, Botswana did away with this policy and disarmed the anti-poaching units altogether.

“I find it very difficult that any government would send its citizens out to the front lines to fight highly organized criminal networks who are armed to the teeth without weapons,” Chase told National Geographic. “This is the largest elephant range left on the planet.”

As of 2015, there were around 130,451 elephants in Botswana, more than in any other country in Africa. For a long time, Botswana was thought to be a stable region for elephants, partly because of these government protections.

Botswana is about to allow elephant trophy hunting

Not only have anti-poaching units been disarmed, the government is also in the process of lifting a hunting ban on elephants, which would open the region to trophy hunting.

Although the government argues that lifting the ban would benefit tourism and reduce human and elephant conflicts, Dr. Chase disagrees.

Instead, he argues that although elephant populations have been generally stable in Botswana for the past 15 years, it is human population growth that is leading to more conflicts as well as elephants expanding their ranges.

Hunting elephants will not solve any conflicts between elephants and humans, Dr. Chase argues. What’s more, trophy hunting does not actually bring many benefits to local communities, or high economic returns. It also harms conservation efforts, by promoting killing endangered species and increasing the number that die each year.

Trophy-hunting is never a good solution

Instead of hunting elephants, Dr. Chase has a better solution. He advocates for “education and awareness around elephants, recognizing elephant migration corridors, rapid response to conflicts, the allocation of agricultural plots in appropriate areas and the further promotion of localized ecotourism businesses.”

Botswana has been a stable place for elephants for the last 15 years, but these recent decisions are a major lapse in their historically strong anti-poaching and protectionist policies.

“In the end, it is important to recognize that humans are a root cause of many of these issues, and that focusing on elephants as a threat or as an economic nuisance is largely counterproductive. To solve these problems, the central focus needs to be human behavior,” Dr. Chase said. 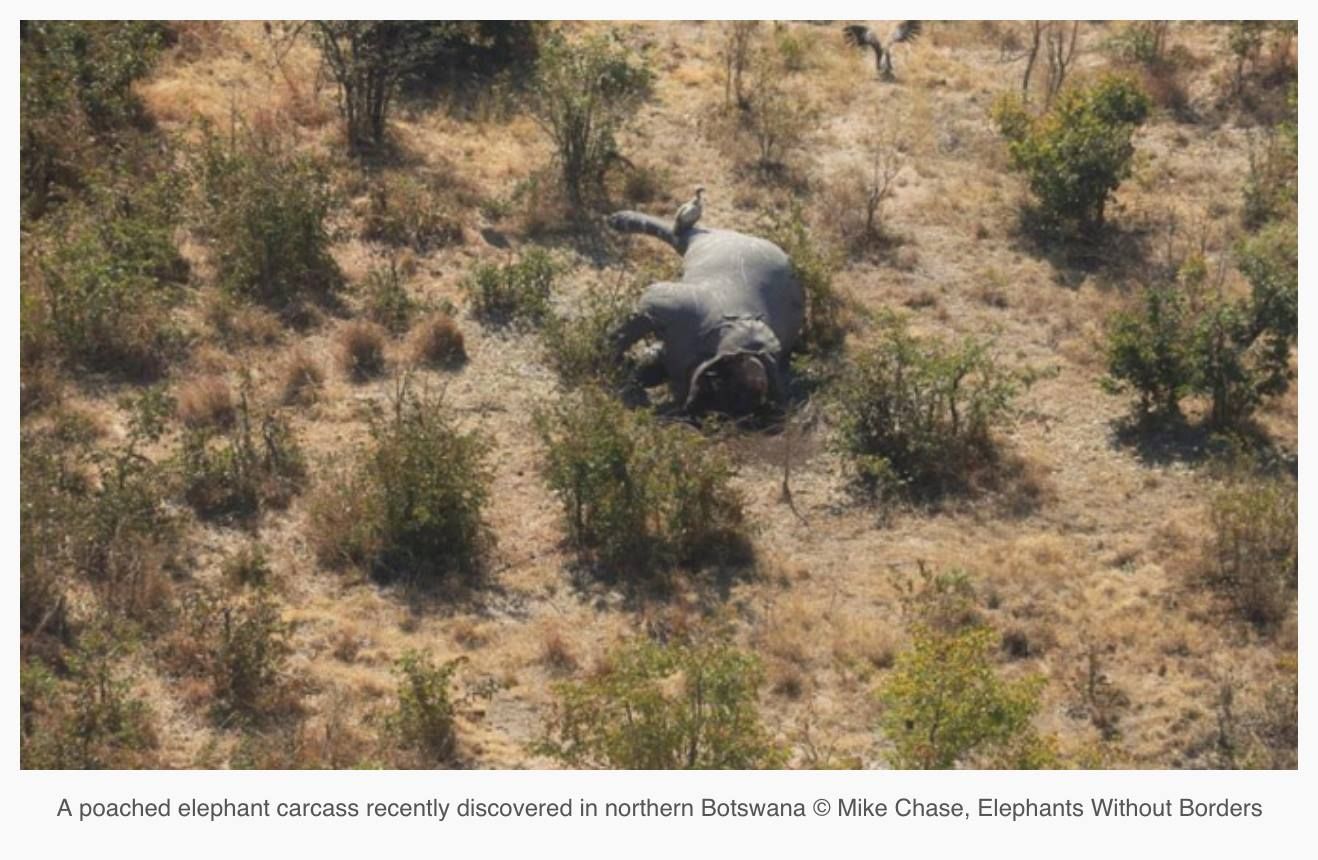