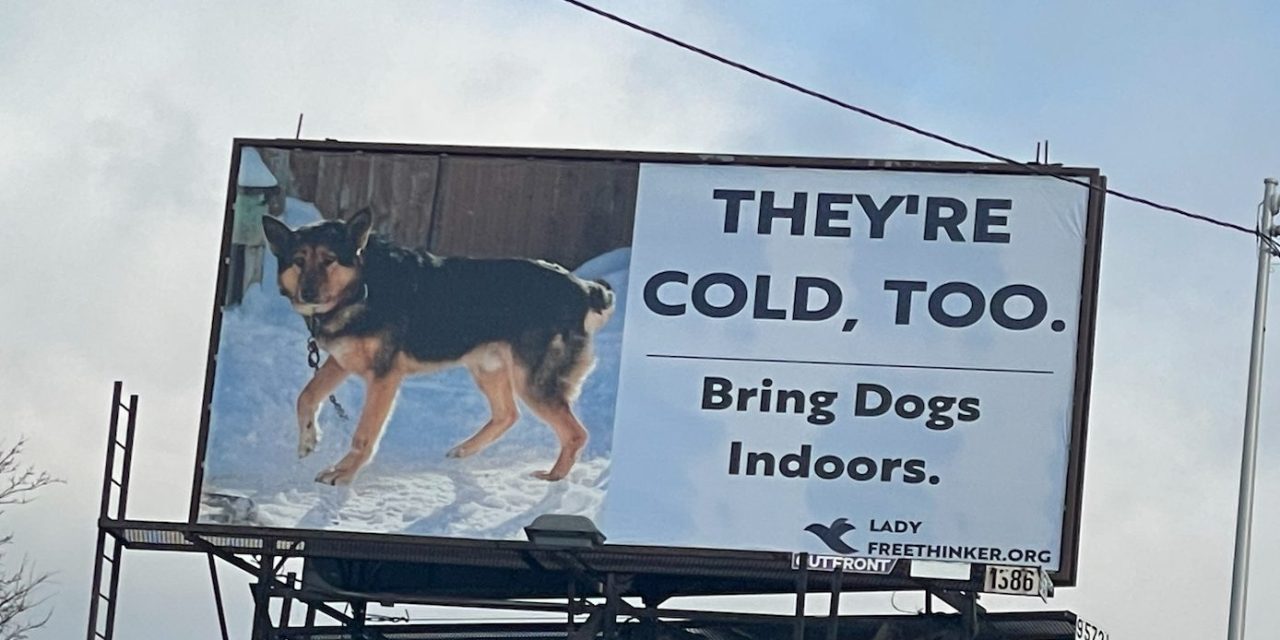 Lady Freethinker has posted two new billboards in Detroit — where a senior dog named Buddy died chained in the cold in 2021 —  to remind people that dogs belong inside with their families, not chained up or left outside 24/7.

LFT took out the ads in January in honor of national “Unchain a Dog Month” and as part of our LFT’s campaign encouraging people to bring dogs indoors and reminding people to speak up if they see an animal left outside in the cold who needs help.

The billboards show a picture of a dog chained outside with the words, “They’re Cold, Too. Bring Dogs Indoors.”

The lifesaving messages will remain up for 4 weeks.

“Dogs, who long for companionship, deserve to be inside with a loving family, not left outside in solitude for their whole lives,” said LFT President and Founder Nina Jackel. “We’re reminding Detroit residents that bringing dogs inside is crucial, especially in the winter as temperatures drop. That animal’s life could depend on it.”

LFT also is urging residents in Detroit and across the United States to step in if they see an animal suffering in the cold by talking with the owners about the importance of keeping dogs indoors and reporting any life-threatening conditions  — including dogs shivering, tangled in their tethers, or without access to food, water, or shelter — to authorities.

Dogs are social, intelligent animals who are deprived of everything that’s natural and important to them when they’re tethered 24/7.

If you haven’t already, sign our pledge promising to never leave a dog chained or tethered and share it with your family and friends!

SIGN: I Pledge to Never Chain or Tether My Dog!