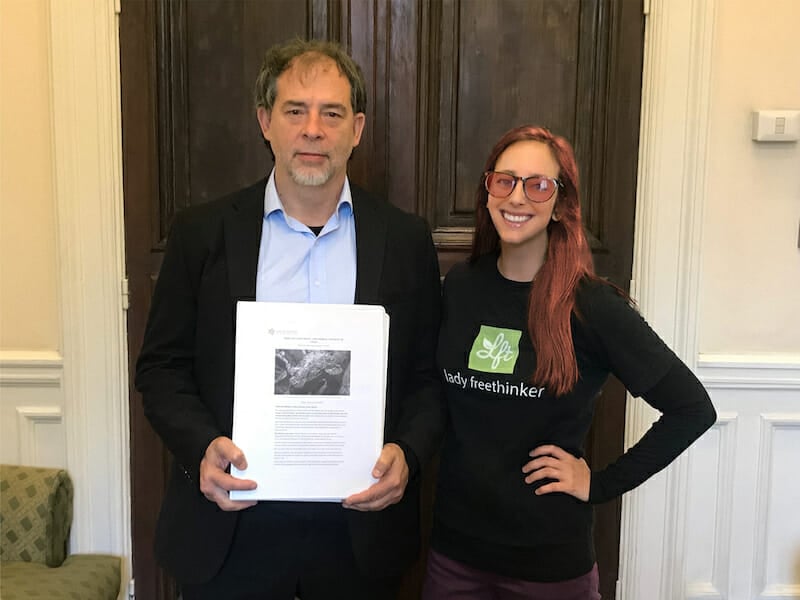 Thanks to you, we’re one step closer to banning torturous live animal exports by sea from Chile.

More than 30,000 of you signed Lady Freethinker’s petition to show Chilean Senator Guido Girardi your support of a new bill to ban live animal exports, which would save animals from a real-life nightmare.

A Lady Freethinker volunteer presented the petition to the senator, who promised to use your signatures to fight for this bill to pass in congress.

Now, your voices will be heard directly by the members of Congress voting on the ban.

The proposed legislation is a combined effort between Senator Girardi and the nonprofit organizations ProAnimal of Chile and Animals International of Australia.

This lifesaving legislation could protect thousands of helpless animals from an excruciating journey with little to no humane protections aboard cruel live export ships. The animals are shoved into overcrowded pens and often crush each other to death. Covered in feces and dirt, they become dangerously overheated, and may even be thrown off-board while still alive and conscious.

We must keep speaking until the Congress has voted on and passed this crucial legislation!

If you haven’t yet, sign now to add your voice.